Living Death has a particular taste.

According to Larry Correia’s latest: Wall of Flame Challenge.

This pepper laughs at jalapenos. This pepper makes the habenero it’s bitch. This pepper has no name, and the ancient Middianites who discovered it referred to it only as – TERRIBLE SHRIEKING DOOM – before it destroyed their entire civilization. This pepper exists in multiple quantum dimensions at one time. This pepper divides by zero.

Have you watched the Winter Olympics? Huh, huh, huh?

Oh hell NO! I tuned three times (two by accident) and that was it. The first time I saw some guy wearing more make up than a hooker on a Saturday night and call me old fashioned but Maybelline is not something that pops up immediately when somebody mentions the Olympics. The second time I swear I saw Jeff Spicoli about to go down some slope on a over sized tongue depressor. The third time I saw the the same made-up guy with even  more make up an wearing enough sequins & feathers as to overthrow Liberace from his Las Vegas Museum.

When I was a kid, I had a chance to read about the real Olympics. Not the summer games but the games as played among the kingdoms in Greece and I wouldn’t mind seeing a couple of bouts of that old style Olympic boxing. Instead of soft cushy gloves and head protection, the fighters wore gloves reinforced with metal (mostly lead), there were no 3 minute rounds and the fight was decided when either somebody called it quits or died.

And before some woman accuses me of being insensitive, I would like to point out that many athlete in the old times wore no uniform… hell didn’t wear much of anything. The Olympics back then were quite popular with the female population.

So, I’ll be rooting for this Canadian team:

Call me Oinker and fed me slop… I don’t care. Women should petition for Old Style Olympics.

Guns In National Parks is such a bad idea because….

According to the L.A. Times, the law allowing citizens concealed is bad because:

Opponents say the law ratchets up the potential for violence in parks, where for seven consecutive years rangers have been the most assaulted federal law enforcement officers, according to data compiled by the park service.

There were 1,844 weapons-related offenses reported in national parks last year.

Wait one minute. So Federal Agents have been regularly getting their butts kicked, assaulted and what-nots so it makes sense that the common citizen should be disarmed so we can get our butts kicked also? And not counting that guns were already in National Parks, just in the hands of those willing to break the law, you know? CRIMINALS.

Seriously people. If you wanna make a case, use logic before opening mouth.

For a more detail explanation of what the Law does or does not allow, check this great article by David Codrea. 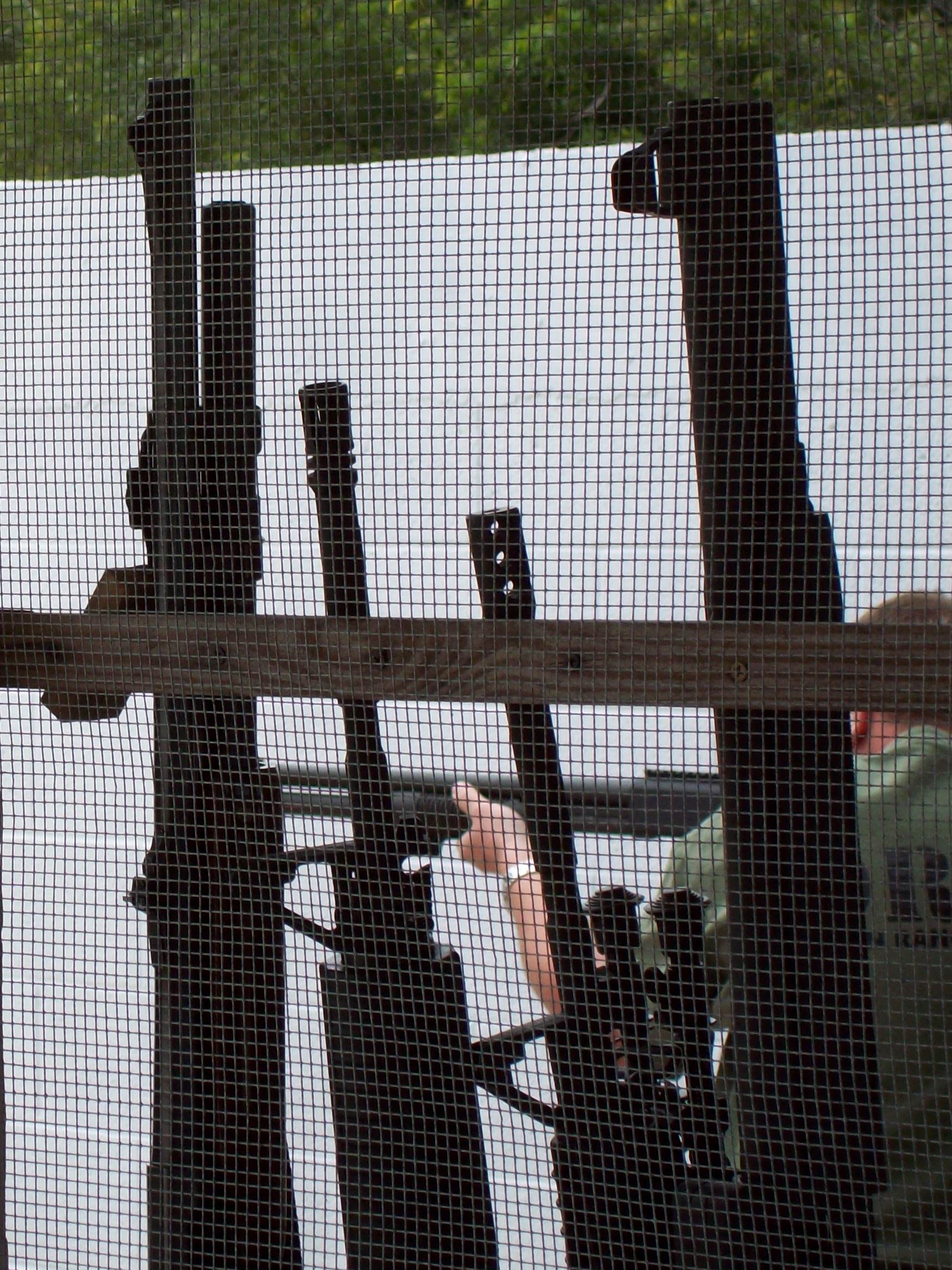 Gotta love the wife. She has a good eye or good luck with pictures.

Subcompacts or the myth of easy insurance.

Let it be the Ruger LCP, a snubbie, a Seacamp or any of the old and new subcompacts out there, let us dispense with the bullshit from the get go: They are carried out of laziness by 90% of their owners.

Since I’ve been carrying, I have done so with a medium size firearm (after a short initial stint with a full size) and I know the kind of dedication it requires. It is not light, it is not that concealable if you carry outside the waistband, you may be faced with having to do a whole uncomfortable strip show if you have to go inside a Government-Mandated Gun Free Zone. Doctors and dentists offices seem to prefer chairs with arms where a you can’t seem to fit with the gun in your waist, etc. I know it is a pain in the ribs, you know it too.

One day,  Lazy Gun Owner is perusing through the glass counters of his local gun shop and sees that small wonder Stamp-Size Gun and suddenly his mind flashes with an epiphany: “Well damn! Look it here! I can carry that pretty little thing in my pocket, nobody will notice and I don’t have to load up on my waist like rough carpenter!” So they get that gorgeous cute thingie, a couple of boxes of ammo (one defensive-type of course) and head for the range.  Here is when he discovers that cutie Stamp-Size Gun won’t shoot accurately past 5 yards, although actually the gun can but it is the Shooter that cannot do it since a small handgun usually has the trigger pull of a nutcracker trying to pry open a golf ball and a small sight radius that makes aiming more difficult. But Lazy Gun Owner does not know or promises himself he will take the time to learn sometime in the future and anyways most gunfights happen at bad breath distance, right? Who needs aiming? Next he gets home, ditches his big gun, holster, spare mags and slides the new miniature in the pocket….along with the tactical knife, 43 cents in change (including a Canadian penny), 3 Skittles and 3 ounces of lint.

If you are going to carry a sub-compact, be smart about it. First: Be Proficient with the Gun. I don’t care how well you shoot your $5,000 ultra customized 1911 from a race holster, it is not a guarantee that you will be James Bond with a small semi auto drawing the bottom of your front pants pocket. Shorter Barrel and short sight radius makes any sub compact a gun that requires a different approach and practice, plus the added time and effort to dig for it in your pocket which does hinder proper grip and initial manipulation. Second: Carry the gun smartly. Have nothing but the gun in the pocket designated for the gun and use a pocket holster designed for that effect. There are holsters available that not only will help you with a proper grip and presentation of the gun (remember, you are still drawing from a pocket and it won’t be fast) but will also protect it from sweat, dirt and other elements that might cause a malfunction when the you need the gun the most. Added advantage is that most pocket holsters will disguise the shape of the gun and help you avoid printing. Third: Get the best defensive ammo you can safely shoot. But also be aware that smaller pistol calibers will be more inefficient than bigger pistol calibers and that all pistol calibers are not good people stoppers. Fourth: Carry spare ammo. Yes Virginia, there are malfunctions and missed shots and multiple targets out there. Who told you that only 5 puny rounds were enough?

There is always one or more trade offs when you seek comfort or any other advantage.  What you carry is your decision as well as how you carry and how much practice you should have. We all have heard/ read the tales of people brought down by a single shot from a .22, but always think that it is not going to happen to you and that Murphy is going to mess with your sorry but right there and then.

TSA to swab airline passengers’ hands in search for explosives…. Oh hell, just when i though I did not need another reason not to fly. Now I have to make sure I don’t do any reloading if I have to fly to a match or anywhere.  I like the “random” check part as not to offend terrorists’ sensibilities while they adjust their ANFO jockstrap. ACLU is static that we will not unfairly target the terrorists who are trying to kill us. Of course that means TSA will swab and dismantle the leg braces of a handicapped 4 year old instead.

Now that we can check our firearms again in trains, AMTRAK seems like a nicer option. Screw it, I’ll drive.

I just saw today’s episode of Impossible Shots and I think it is the best they ever done. It featured 84 year old WWII Veteran Sniper Ted Gundy who fought at the Battle of the Bulge. Mr. Bundy had contacted Impossible Shots and asked how was possible for modern snipers to connect a thousand yards. Impossible Shots went the distance and took Mr Gundy to Ft Benning as a VIP Guest for a week. He relives his experiences, talks to a new generation of fighters and you can’t help but choke a little at the emotions this gentleman shows for his past and our future.

Please read on the show narrative from Firearmstalk.com If you can’t wait for the show, at the bottom of this post you can find out what happened when and Old Sniper meets modern rifles and techniques.

Mr. Gundy, to the amazement and admiration of the top Army Snipers makes three head shots a one thousand yards on his first try. At 84 years of age and with a missing leg. It was truly the Greatest Generation.