Winter’s coming and cold homes are on the menu.

Oil is the number one source of home heating in the region. The U.S. Department of Energy reported diesel and heating oil inventories are 60% below average in New England.

Lower supplies stem from a variety of factors including the war in Ukraine, which continues to disrupt energy supply chains worldwide.

However, an active hurricane season may also play a part.

“If a hurricane comes through the golf coast and requires all those workers in the refineries to wait until the storm finishes and repair the refinery that will have an effect on supply chains,” said Matt Cota with the Vermont Fuel Dealers Association.

U.S. Energy Secretary Jennifer Granholm is calling a meeting of northeast governors to discuss the fuel oil situation after labor day. she’s also urging states to do all they can, to “shore up” supply.

Vermont’s natural gas, whose price is regulated, is also rising, up 10% this month.

How low fuel inventories could impact our region. (mynbc5.com)

I have to say this concern is new for me. I read about this a couple of days ago and told the missus about it. She was smart to already order the next refills at a decent price (actually a buck plus the last time we refilled in the middle of Winter) and that should keep us nice and toasty for the upcoming ball freezing season.

But the lie of blaming the war in Ukraine for shortages is getting rather old and smelly. Shutting down the oil production for Green Shit and Politics is your culprit. And how bad it is going to be? This line was what should make you think hard about prepping:

U.S. Energy Secretary Jennifer Granholm is calling a meeting of northeast governors to discuss the fuel oil situation after labor day. she’s also urging states to do all they can, to “shore up” supply.

This is what the energy experts call a big effing hint. 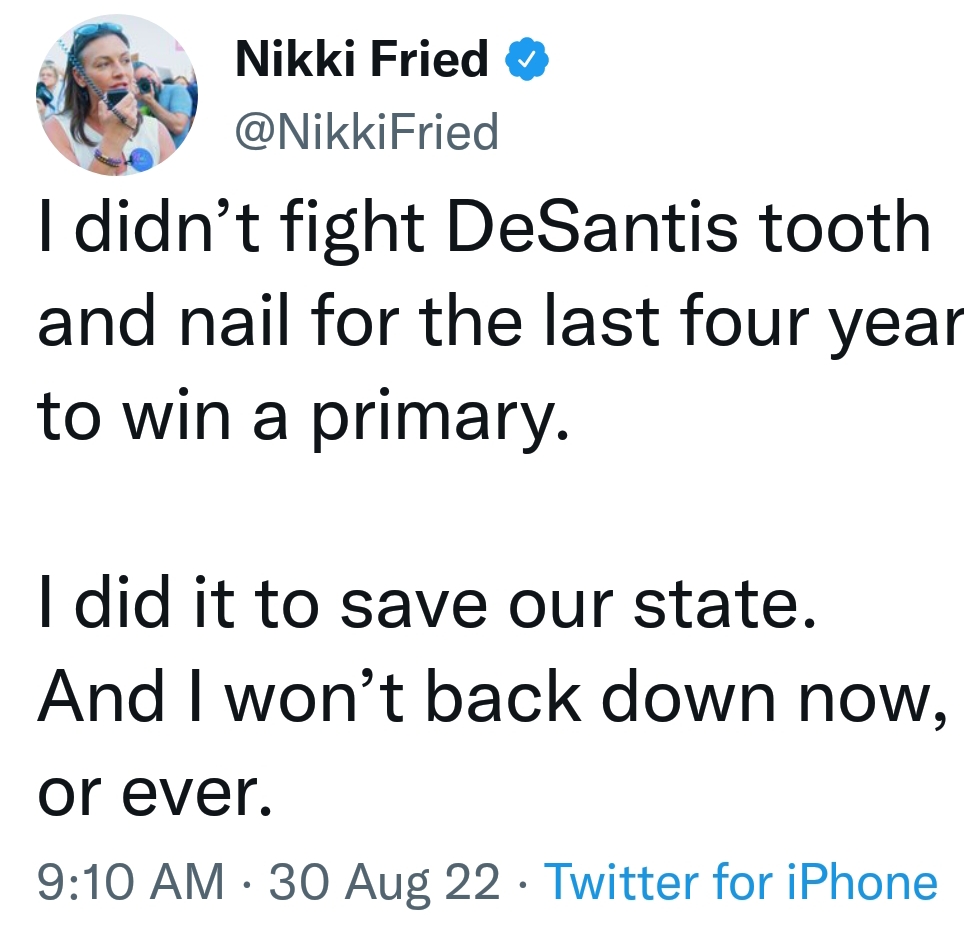 You may want to call your campaign manager. YOU LOST THE PRIMARY!

The Firearms Policy Coalition is a pro-freedom and pro-gun rights group that is getting fucking dragged by the Right because it failed to read the room and shut the fuck up when it was necessary.

This started in response to a story I covered the other day.

There was a “kid friendly drag show” in Texas.

For everyone who isn’t a radical Leftist or a pedophile, there us no such thing as a “kid friendly drag show.”

There was video of children stuffing dollars into the cleavage of a drag queen dressed like a unicorn.

Antifa with a local chapter of the John Brown Gun Club showed up with ARs and tactical gear to serve as body guards for pedophile drag queens due to threats from the Right.

The difference is they won’t fight for my gun rights even if I fight for theirs.

Also, Leftist politicians don’t punish them for breaking gun laws but do punish us even when we use our guns legally.

See the Kyle Rittenhouse trial vs all the Antifa who shot at cars while illegally blocking traffic.

If the law is not applied equally, I have no obligation to fight for equal rights.

The FPC took the traditional approach of equality under the law.  Noble but stupid given that they were defending Antifa protecting a pedophile drag show.

They’re fundamental rights of all humans, which means even people who disagree with you must be able to exercise it, you authoritarian dumbfuck https://t.co/3zwLA1O3Hv

It just went down hill from there.

We don’t “support pedophiles” you dishonest idiot. We do support constitutionally protected rights that apply to all people. https://t.co/Jr9URNV3xo

FPC does not support evil. We never have. And we never will. We can’t believe we even have to say this, but we’ll say it again, we DO NOT SUPPORT FUCKING PEDOPHILES!

Then the memes began.

Yeah, it’s not a good look.

I used to be one of these principled small government conservatives.

I believe in equal protection under the law and all that shit.

But I’ve been pushed from that into Pinochetism.

I am tired of watching the advance of the radical Left over the culture.

I never thought that I’d live in a country where the official policy of the majority political party includes performing mastectomies and genital mutilations on teenagers because of identity politics or would defend the exposure of children to grotesque public sexual displays.

But here we are.

Nevertheless, I’m not going to fight for the right of pedophiles to groom and molest children from behind armed communists who have a history of engagement in political violence.

That seems to be the attitude of a lot of people on the Right.

No more polite and noble loses as our principles are weaponized against us.

The FPC is welcome to stand by their principles but when that has them defending the right of pedophiles to groom and molest children from behind armed communists who have a history of engagement in political violence, perhaps the smartest course of action is to shut the fuck up and not come out swinging for the pedophile communists.

Or you get fucking dragged on the internet.

NYC: “I swear ours will work!” 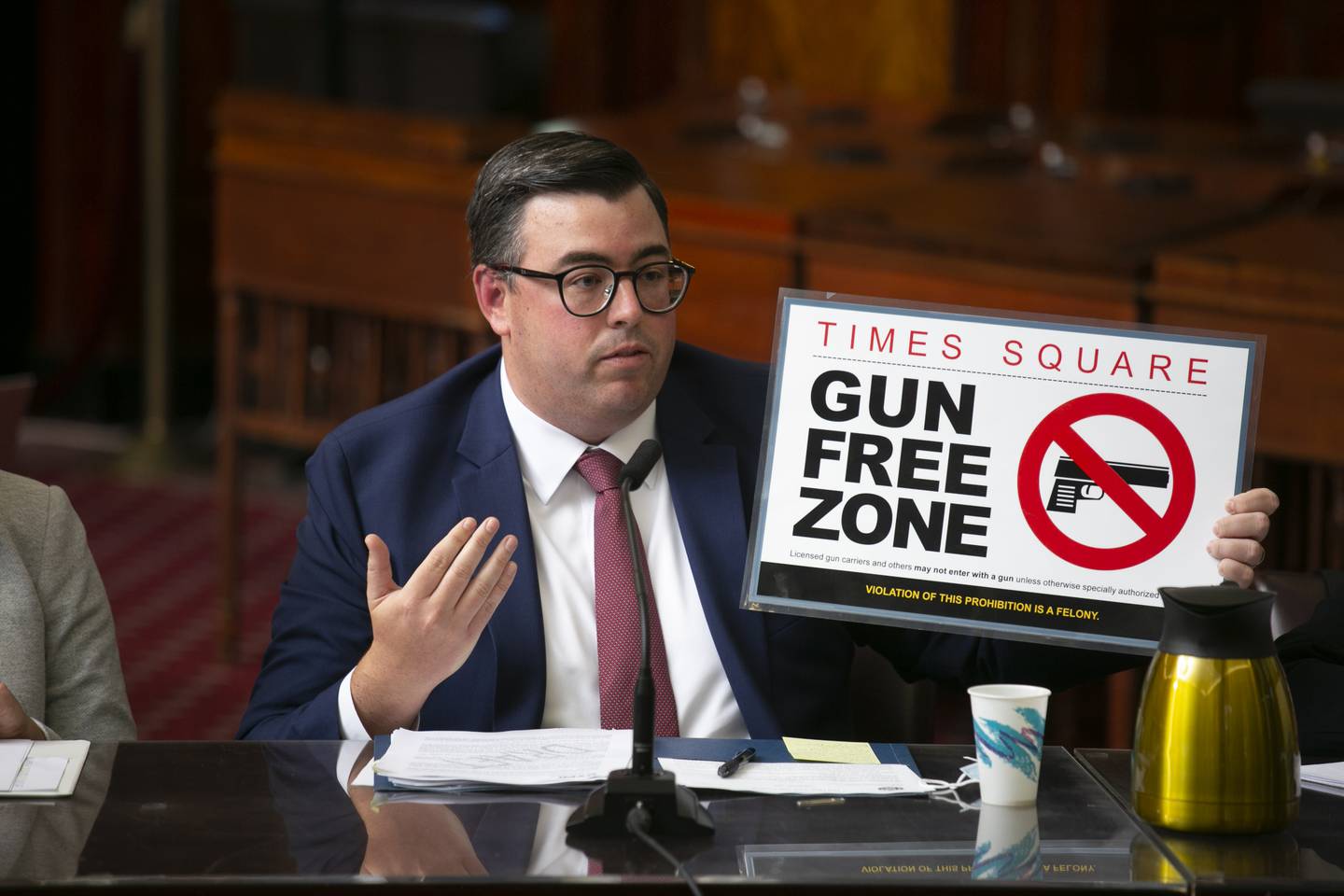 The cops are copying signs declaring Times Square’s gun-free status after local lawmakers banned firearms in the Crossroads of the World.

Robert Barrows, the NYPD’s executive director of legal operations, held up one of the signs — which screamed “GUN FREE ZONE” — at a City Council hearing on Tuesday focused on securing sensitive spaces after the Supreme Court gutted the state’s concealed carry handgun law.

Somebody should start a counter of all the gun incidents that will happen in the newly minted NYC “High Risk Settings”, so we laugh about it.

Governor Stazi wants you to prove loyalty to own a gun

.@GovKathyHochul on public safety: “[Social media] questions are now part of our background checks. Just like in the old days – you talk to someone’s neighbor […] and find out whether this person has been spouting philosophies that indicate that they have been radicalized.” pic.twitter.com/b9FqVUlot7

What standards do they have for radicalization?

If a Lefty praises communism or posts a Che picture will they be denied?

How about people who post BLM or Antifa anti-cop talking point?

Those who supported the George Floyd riots and looting?

I don’t know but I doubt it.

I can just about guarantee that your Gadsden Flag post will get your permit denied.

So will any of your pro-Trump posts as well as anything that questions the 2020 election.

Your Hunter Biden posts and Pedo Joe and Let’s Go Brandon will probably be flagged as well.

These people don’t want to eliminate gun crime, they only want to control who has guns, and it certainly won’t be you MAGA people.

Gun permits will be given out to select few based on party loyalty, just like they were in every other dictatorship.

When I ride on public transportation with my daughter, we don’t need to see @NSSF propaganda.

These look like gun safety ads but are subliminal ads for gun sales.
And they have no place in Philly.

While riding the bus, as we always do, my daughter and I were playing I-Spy as she spied “something orange” — an article of clothing in an advertisement. Upon closer examination, I saw that this ad was telling riders that buying a gun for someone who cannot legally own one will result in a 10-year prison sentence. While this seemed like a fine message that I would generally support, a few details of the ad didn’t sit right.

This ad, paid for by the Firearm Industry Trade Association, while factually correct, implies that illegal gun sales are the biggest factor contributing to the gun violence crisis in Philadelphia. The ad says nothing about legal gun owners or homemade, unregistered firearms. The lobby, by tying gun safety to the sale of firearms, is subconsciously pushing gun sales. It ignores the danger of firearms themselves.

Visually, the ad highlights the phrase “buy a gun” and uses the phrase “buy 10 years in jail” (a fairly uncommon phrasing for “go to jail”) — a marketing ploy that associates the action of “purchasing” with the product of “a gun.”

Illegal or “straw” gun purchases are wrong and it is important to raise awareness about this issue. But the firearm industry has a greater responsibility to keep guns out of the hands of dangerous people.

Advertising dollars are powerful and should instead be spent on advocacy campaigns in support of responsible gun laws, the promotion of programs that distribute gun violence prevention or intervention resources, recommendations for supportive spaces for those processing the trauma of gun violence, and much more.

This is one of the most idiotic and irrational things I’ve read.

Let’s go through this piece by piece.

“The ad says nothing about legal gun owners or homemade, unregistered firearms.”

On the other hand, straw purchases represent about 40% of the guns used in crimes.  Most of the rest are stolen.

So this is an ad that tells people not to engage in straw purchases, which accounts for 4 put of 10 guns on the streets.

“The lobby, by tying gun safety to the sale of firearms, is subconsciously pushing gun sales. It ignores the danger of firearms themselves.”

This is unhinged. The ad tells people not to buy a gun for the other person and this idiot says “it ackchyually says the opposite.”

And what danger are firearms themselves?

If he’s talking about kids finding a gun and hurting themselves or someone else, there is a different ad for that about locking up your guns.  This ad is about stopping straw purchases.

“The firearm industry has a greater responsibility to keep guns out of the hands of dangerous people.”

Like what?  The industry sells to distributors who sell to retailers. The NICS system is in place.

Straw purchasers allow criminals to bypass the NICS system.  How does the gun industry do more than it does?  What other responsibilities does it have beyond obey ATF regulations on sales?  He’s not even proposing a solution.  He’s just saying “do something” with extra words.

Other groups do that.  The NSSF shouldn’t have to advertise for laws that threaten its existence.

The gun industry is in the right here.  They did a responsible thing.  Rather than praise it, this idiot says “it’s not good enough” because it came from the gun industry.  I would bet that if it had Moms Demand Action or some other anti-gun group’s logo on it, he wouldn’t have written this OpEd.

This is irrational hatred of the gun industry from an idiot and nothing more.

This is how much of a b*tch Beto is 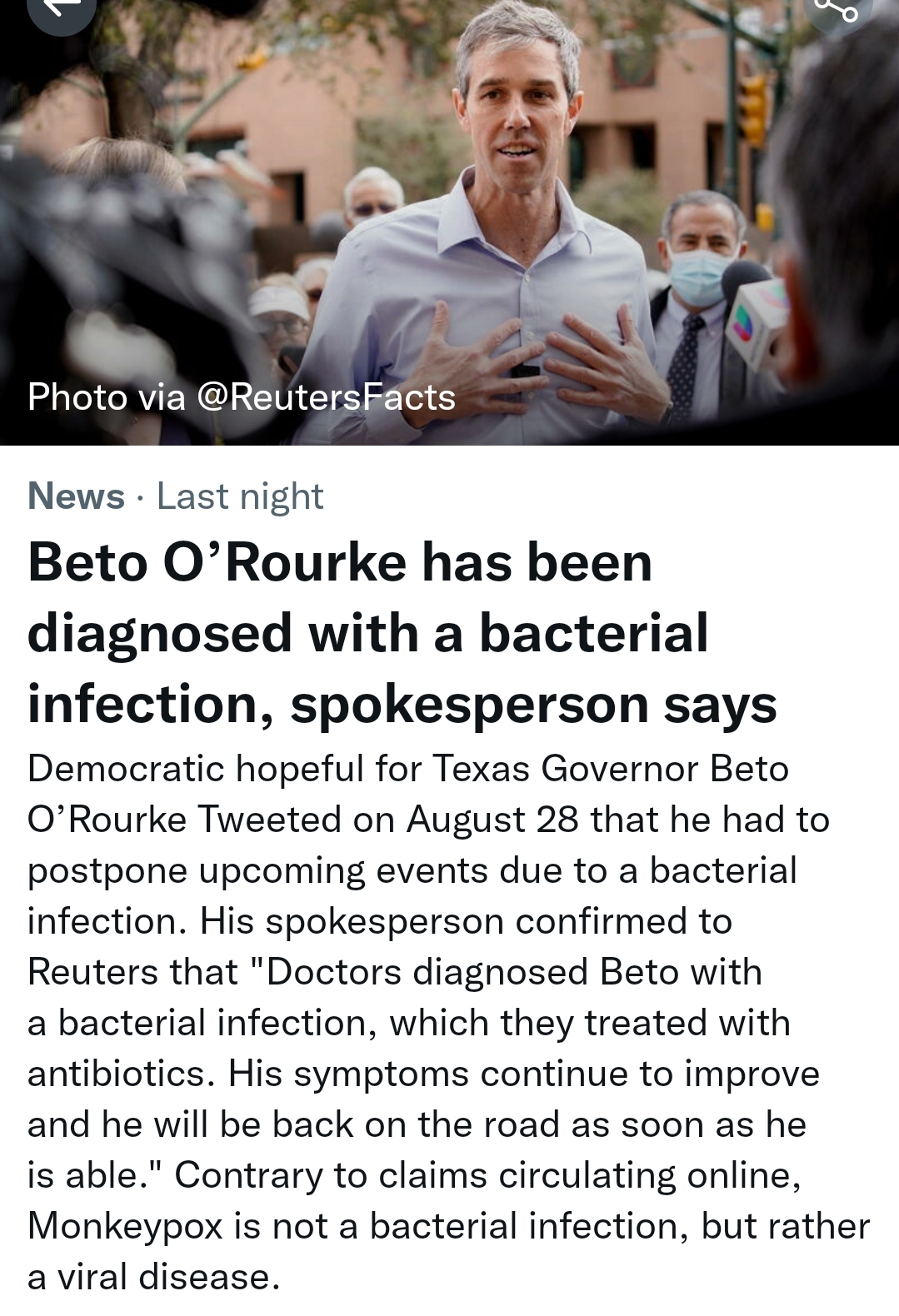 Beto gets an infection and the media has to remind everyone that it’s not monkeypox.

Imagine just how much of a beta bitch a guy gas to be that he gets sick and everyone just assumes a bunch of men ran a train on him up his ass.

I think it’s actually more insulting that they had to get out ahead of this than just ignore the trolls.

And given how much the media lies and carries water for Democrats, I’m not sure if I trust this to be accurate. Beto might actually have the Sodomonkey Pox.