The conspiracy theorists have bern vindicated on smart homes

When thousands of Xcel customers in Colorado tried adjusting their thermostats Tuesday, they learned they had no control over the temperatures in their own homes. via @jaclynreporting https://t.co/mgLEC6SEzR

Temperatures climbed into the 90s Tuesday, which is why Tony Talarico tried to crank up the air conditioning in his partner’s Arvada home.

That’s when he saw a message on the thermostat stating the temperature was locked due to an “energy emergency.”

“Normally, when we see a message like that, we’re able to override it,” Talarico said. “In this case, we weren’t. So, our thermostat was locked in at 78 or 79.”

On social media, dozens of Xcel customers complained of similar experiences — some reporting home temperatures as high as 88 degrees.

Xcel confirmed to Contact Denver7 that 22,000 customers who had signed up for the Colorado AC Rewards program were locked out of their smart thermostats for hours on Tuesday.

You thought you could control the temperature in your own home.

Big brother controls the temperature in your home.

The enforcement of Bruen is a Jewish issue

It’s Open Season on Jews in New York City
Of the hundreds of hate crimes committed against Jews in the city since 2018, many of them documented on camera, only a single perpetrator has served even one day in prison

The attack that sent 31-year-old Yossi Hershkop to the hospital was an unmysterious crime, the opposite of a stone-cold whodunnit. Security cameras recorded clear video of a group of four men approaching Hershkop’s car, with two of them repeatedly punching him through the driver’s side window while his 5-year-old child sat in the back seat. Another camera recorded the license plate and model of the attackers’ getaway vehicle. The assault took place around 3:40 p.m. on July 13, 2022, on a busy street in Crown Heights. Hershkop believes his assailants were identified later that evening.

The police did not move quickly. No arrests were made during the two weeks after the attack, a span in which the getaway car got ticketed in a totally unrelated incident, Hershkop says. On July 27, an exasperated Hershkop tweeted: “No arrests have been made, despite the assailants’ vehicle having been seen all over the neighborhood. My son still has a lot of trauma from the incident & we now Uber instead of walk whenever we need to go out.” Perhaps not coincidentally, the first arrest in the case was made the day after that tweet, some two weeks after the attack. The first suspect was released on bail after the judge ordered a bond of $10,000, significantly less than the district attorney had requested, according to Hershkop.

In a study released this past July, the New York-based group Americans Against Antisemitism found that of the 118 adults arrested for anti-Jewish hate crimes in New York City since 2018, only one has been convicted and sent to prison.

Earlier this month, an Orthodox Jew from Baltimore named Aryeh Wolf was gunned down in broad daylight as he attached solar panels to the roof of a building in a gentrifying neighborhood in southeast Washington, D.C. As with Hershkop’s attack, Wolf’s murder was a motiveless crime in which the motive was obvious. To the killer, Wolf and the trendy new technology he was installing might have represented the growing penetration of outsiders, further distilled by Wolf being the ultimate of outsiders: the proud religious Jew. So far, no one has been arrested. The Washington police still consider the motive in the crime to be unknown.

In New York, street harassment, minor assaults, and even full-on beatings of visible Jews are almost a banality now, too frequent over too long of a period to be considered an active crisis, even in the communities most affected. The city reported a 76% year-over-year rise in hate crimes during the first three months of 2022—attacks on Jews more than tripled, accounting for much of the spike.

I have been covering the antisemitic violence in New York for a while.

Current Mayor Eric Adams talks about hate crimes against the Jews, but just like in dealing with hate crimes against Asians, he’s done fuck all nothing to curb it.  Probably because most of the perpetrators of these crimes are from the demographic that cannot be criticized by Democrats.

Former Governor Andrew Cuomo turned the Waffen NYPD against the Jews under COVID and is being sued over it.

That’s why other Jewish groups don’t stand up for the Orthodox.  Most of them are Reform or some other Progressive branch of Judaism, and don’t support Jews who aren’t Democrat donors.

As a result the Orthodox Jews are on their own to defend themselves.

The Shomrim are associated with the NYPD but are unarmed and have little ability to do more than drive around in quasi-cop cars and carry radios.

The Jews of New York need guns for personal protection.

That is the only thing that will turn the tide of antisemitic violence.

Bruen should have turned New York into a shall issue state, NYC included, but New York is dragging it’s feet.

While I wholeheartedly support the right of all law abiding citizens to conceal carry, the targeting of Jews and the conspicuous lack of law enforcement against those who do target Jews, elevates the need for concealed carry in the Jewish community.

Bruen must be enforced so the Jews can protect themselves.

A Republic, if you can keep it

Mrs. Elizabeth Powel asked Dr Benjamin Franklin, “ so what have we got? A Republic, or a Monarchy?”

Dr Franklin answered, “A Republic, if you can keep it.”

But today you find so many talking about “Democracy”. Democracy is two wolves and a lamp arguing about what to have for dinner. It is mob rule.

The republic our founding fathers gave to us is amazing. The people have done much to damage it, making the election of senators a popular vote being one of my least favorite changes.

The fact that they were able to put it all on four pages plus the bill of rights is in itself amazing. If you were to look at other constitutions you find hundreds if not thousands of pages, most of which translate into “Unless the government wants to.”

Our Constitution lays out our form of government and then sets acknowledges the some of the rights given to us by our creator. Rights the exist regardless of government.

The Atlantic is left leaning. They love to pontificate from the basis of false premises and to build their arguments.

So what does Jedediah Britton-Purdy think the flaw in the Constitution is? According to the author it is the fact that it is just so darn hard to change the Constitution.

The Constitution doesn’t have to be something we merely inherit; it could be something we can change ourselves—starting with rewriting the too-stringent rules for making such changes.

People on the left seem to crave power. How the get there never seems to bother them, as long as they get the power they want. When the Democrats were in the majority in the Senate they decided to kill the filibuster in regards to judicial appointees, because the Republicans were just nah sayers. All they ever did was say “NO”.

So the filibuster was killed. The Democrats loved it. Until that exact moment when the Republicans took control of the Senate. At which point they started screaming that the filibuster should be reinstated. It is always the way of the Left. They change the rules and tell us the new rules are good, up until the moment those same rules are used against them.

Some federal judge in California doesn’t like Trump’s executive order because it will harm some set of people or return to the status quo of pre Obama? Then it is just wonderful that the judge puts a nation wide injunction against that EO.

Some judge in Texas finds that Biden’s EO is unconstitutional and articulates the reason why and it is absolutely unacceptable that a single man in a black robe stop a Presidential Executive Order.

But the Constitution is too fundamentally antidemocratic a document to serve democratic purposes reliably. If we want to make it genuinely and lastingly democratic, we will first have to consider changing it in the most basic way: by amending Article V, which governs amendments and so serves as the gatekeeper for living generations …

But the root of judicial oligarchy is that the Constitution is almost impossible to change. Article V requires that amendments be ratified by three-quarters of the states, either through the state legislatures or in special conventions. (The convention route has happened only once, when the Twenty-First Amendment repealed Prohibition in 1933.) The upshot is that it takes only 13 states to block a proposed amendment. And to send an amendment to the states in the first place, the proposed language must be approved by a two-thirds vote of both houses of Congress.

Today many of the arguments by the left start with an ad hominem attack. Instead of looking at what the Constitution actually says they attack it because it was written by “cis white males”. Here’s the thing, just because you don’t like the person or the people, that doesn’t mean that what they created isn’t good or true.

The more I read this book, the more I feel I need mass quantities of ammo 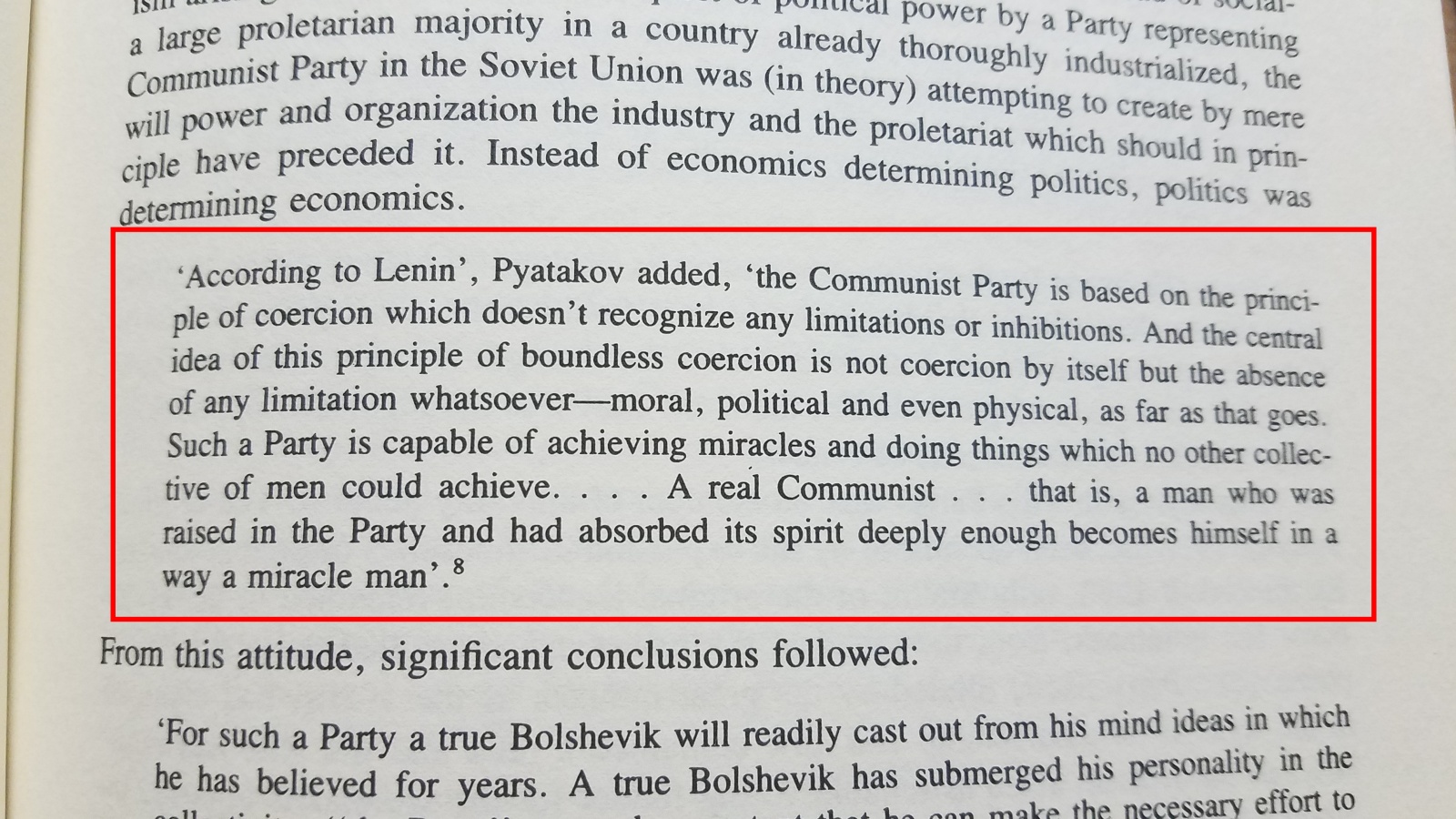 “The absence of any limitation whatsoever – moral, political and even physical, as far as that goes.”

Do you understand now the double “Justice” system? Unlimited abortion up to right before delivery? Mass Lockdowns based on nothing but fake Trust Science? A President accusing 40 million citizens of being semi-fascist? Disarming civilians while hiring and arming 86,000 new feds. American Stasi at the old J. E. H. building?

I don’t know about packing cattle wagons to and sending them East via Amtrak simply because it is unreliable, but I would not be surprised if somebody is already factoring the use of 18 wheelers as acceptable alternative, diesel consumption and all.