Found it in Facebook and passing it along. Great info! 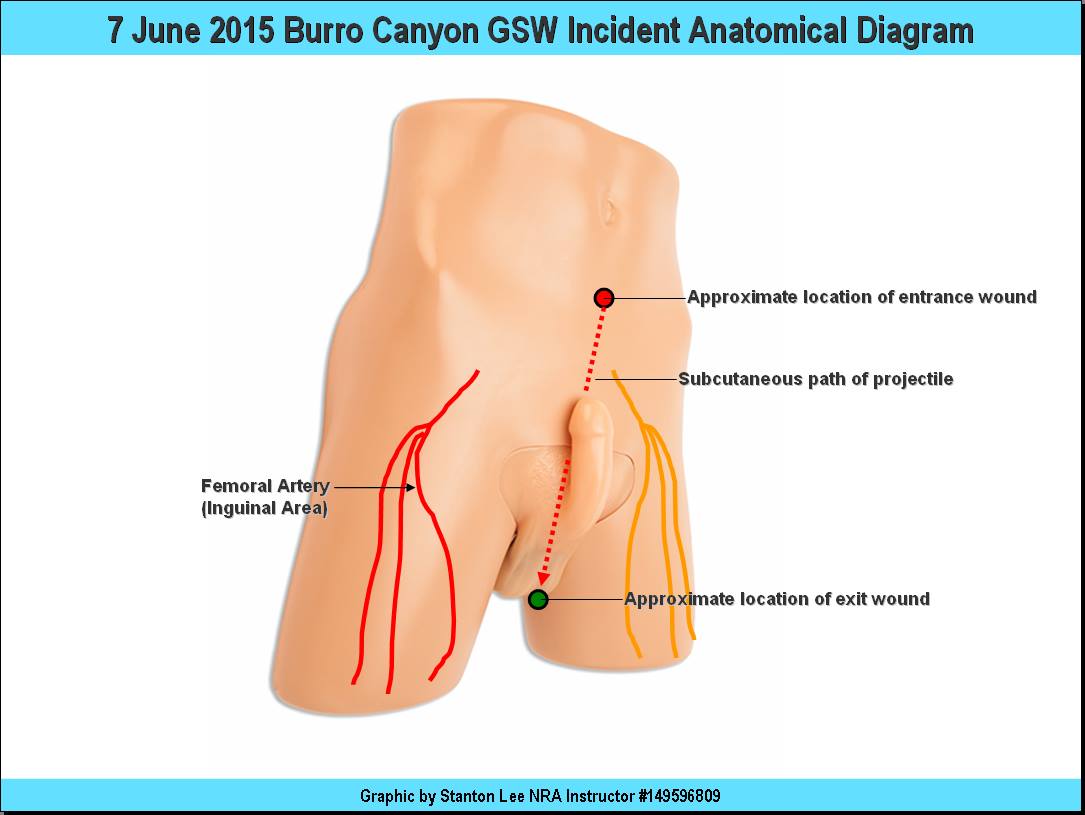 *This after action report is for one primary purpose; for the betterment of the firearms training community and serve as a guide for best practices for other trainers, range officers, RSOs and anyone hosting a range to improve or maintain their emergency action plans and standards. This is NOT an invitation to debate about holster styles, the four safety rules, unholstering/holstering techniques or denigrate the wounded.

*On Sunday 7 June 2015 at approximately 2:30pm I had just given a brief on the Tueller Drill, my RSO Enrique added to the lesson when I heard the sound of a single gun shot and then the distinct sound of a man in pain from the adjacent range to our own. I quickly walked over past the edge of the berm blocking my view and saw a man checking his abdominal area, I asked what happened and he responded that he had shot himself. At that point I ran over to the patient and the following occurred.

*Patient was 30ish year old male.
*Had the patient lay down to better triage his wounds.
*Had the patient’s legs elevated by another member of party.
*The patient’s shirt was raised exposing the entry wound on the lower abdomen then lowered the patient’s pants completely exposing the exit wound on the bottom portion of his scrotum. Patient’s scrotum was bloody but from my best observation there did not appear to be an arterial injury fortunately.
*Decided that an Israeli Bandage was the best course of action. The wrapper of the bandage is designed to be tough for protection from the elements, I found with the blue nitrile gloves on it was difficult to tear open so I used a pair of shears to open it up. There is second plastic wrapper on the inside and that needed to be cut open as well. There was a lack of dexterity under stress and loss of fine motor skills.
*Applied Israeli Bandage to the scrotum, weaving the loose ends of the straps through the built in pressure applicator to press down on the wound.
*The entry wound was much smaller and appeared less serious, for that one I used a simple adhesive bandage to keep dirt and sweat out.
*I heard someone mention the word “ambulance” and I highly suggested they simply drive him directly to the hospital. Someone from the patient’s party drove him to the hospital immediately thereafter.

Suggested Practices:
Briefing of the four firearms safety rules is of course a given, after that the first aid/gun shot wound treatment and medical evacuation plan should be thoroughly briefed as if an emergency incident had already happened to you.

Someone should be able to brief all of the above in detail. That someone should be with the party from the beginning to the end. I think it’s acceptable to have the GSW kit centralized but extra credit points for wearing it.

Reverse plan: from the hospital how did the patient get there? In which vehicle? Who drove? How did they know how to get there?

*Thus, there should be at least one designated ambulance.
*Driver designated, preferably someone who knows the area.
*Keys will be on the dashboard or in the ignition.
*Google or Yahoo map from point A (the range) to point B (the nearest hospital with a 24 hour emergency room). Ensure it is not a convalescent home or veterinarian!
*Parked in a manner with an easy egress route.

*I got a lot of kudos in this thread but I return all the compliments to US Navy Field Medicine.

And the answer to the question you are having is: Yes, Appendix Carry.