A failure to predict so big, it rivals the Trump election.

Dorian has been a huge ball of suck and fail for the National Hurricane service. This storm has been incorrectly handled for the past week. Tuesday the forecast was that Dorian would be a strong tropical storm landfalling near Fort Lauderdale. By Friday, it was to have max winds of 130 mph. Saturday morning they were forecasting winds of 150, and then 155. The actual winds are over 185 mph.

Divemedic is so right it should frighten you.  You turn on the TV right now and you can hear them almost swearing on a stack of Bibles that Dorian will turn north anytime now and spare us from evil as it just cruises up the Florida coast. If you have lived in Florida long enough, you already dismissed their bullshit and either fled or are already bunkered up because you know we are gonna get hit.

On Wednesday they were predicting it would land somewhere around Titusville but as of today, it is aiming for West Palm Beach and that is a miss of 149 miles according to Google maps.

Landing in WPB puts me barely outside the hurricane force winds which thankfully only extend 45 miles out from the center of the eye. We are gonna get full blown Tropical Storm winds, but that is something we have done before including weak Category ones without shutters up. 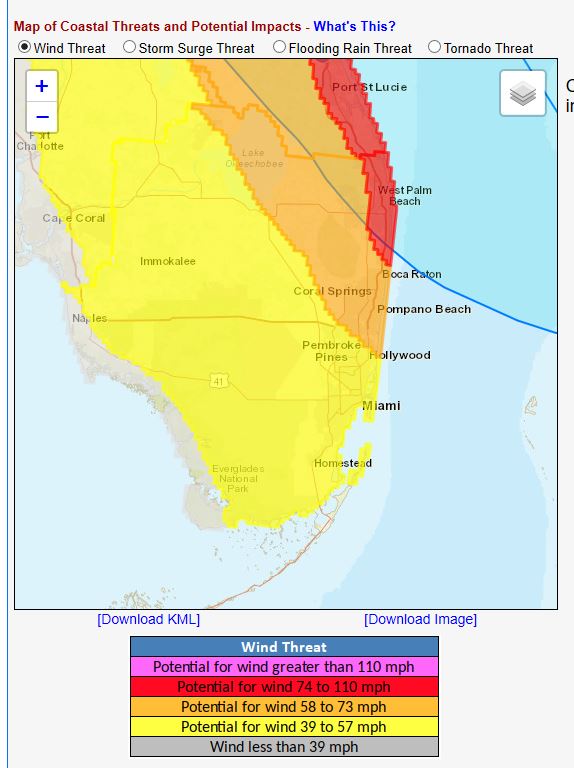 And I have to add this: I am being hopefully positive that Dorian does not decide to turn south or the shitload of people that are gonna get rammed in Miami-Dade will be amazing if the parties and lack of shutters is indicating. I stepped outside and out of the 9 houses I could see, only three had shutters of some sort. They probably heard the good news on Thursday and it would tun north and they just gave up on readiness. Besides, it is Labor Day Weekend! As in the election, they may suddenly realize shit was not what was promised and end up as a good episoe of Rescue 911: The Miami Hurricane.

Fingers crossed and for my Floridian Bloggers and readers, best of luck and see you when this is over.

7 thoughts on “A failure to predict so big, it rivals the Trump election.”