Again, let me see if I get this straight.

Dancing Monkey Comedian Christopher Titus has been a very minor celebrity suffering from TDS since the election. This is his latest: 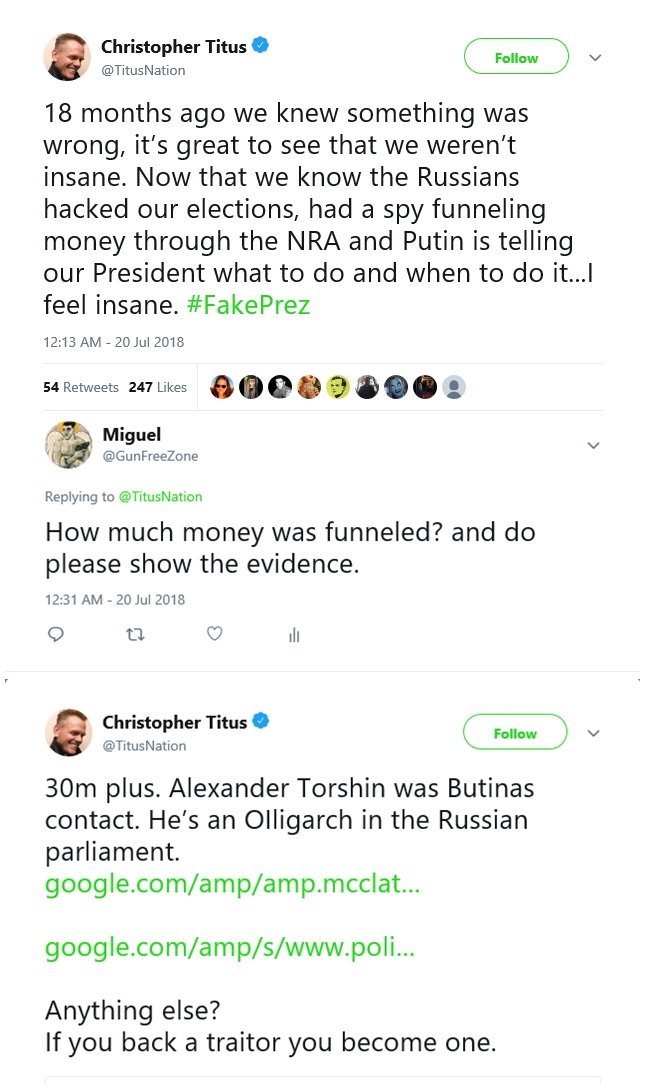 Here are the links he provides:

When you are done reading, you find out that there is no remote evidence to suggest the 30 million dollars or any amount of millions came from Russian forces related to Putin and trying to influence elections. But carefully wording the subject, they make it look like the expenses are somehow tainted with foreign influence that are suddenly bad in this election unlike Obama’s presidential campaign which received $181 million dollars in donations from foreign sources and apparently they were not treason against the US.

Here is a key paragraph from one of the articles shown as “evidence”:

For more than a year, some Democrats in Congress also have been trying, mostly unsuccessfully, to force the NRA to produce documents that could shed light funding from Russia, and its ties to Russian figures like Butona and Torshin.

Have been asking to produce documents. That tells you two things: 1) They have nothing credible (including the FBI) to get a subpoena for records. Yes, te records are legally protected, but if they had real evidence of money funneled illegally to the NRA, the FBI would have been on it like white on rice. 2) This is a fishing expedition to scare the shit out of people donating to the NRA. They figure that if they get the records and the list of donors is suddenly released to the public, people will stop sending money and thus crippling the NRA.

Now, I would not put past the current Special Counsel that they would try to get the records just the same just to make some more political hay. It is their way to admit the NRA is a powerful lobby when election times comes around and they are not probably feeling too  confident about the Blue Tsunami for next November. In fact, they are downright scared about not advancing in Congress and the local legislatures, so they need to hedge their bets eliminating a powerful entity like the NRA or at least tainting its image.

But if they continue to play this game, there might not like the results of the elections after all and I am not talking about what comes out of the ballot box. A lot of us do not take kindly being called traitor and might take offense.

4 thoughts on “Again, let me see if I get this straight.”