This story from The Trace popped up on my news feed.

The Ad Execs Who Want to Put Graphic Warnings on Ammunition

Oriel Davis-Lyons and Gustavo Dorietto hope their marketing campaign will prompt states to adopt the kind of graphic labels that adorn cigarette packs in more than 100 countries.

Imagine this: You head to your local gun retailer to buy bullets for your hunting rifle, and as you pick up the ammunition box, you are confronted with the image of a bloodied young woman in a hospital bed, the survivor of a near-fatal domestic shooting. A line of text below the photo reads: “In homes where domestic violence occurs, a gun increases the risk of women being killed by 5 times.”

If a pair of advertising executives have their way, this would be the future of ammunition buying in the United States.

Exactly what is the point of this?

The argument for the graphic warnings on cigarettes is that smokers don’t know what smoking does to them.  Showing them gory pictures of tumorous lungs will make them think of they are doing to their bodies and stop smoking.

The guy buying hunting ammo is not likely a spousal abuser and the act of buying ammo isn’t going to make him become an abuser.

Also, does the guy who goes to the gun store to “bullets for [his] hunting rifle” not know what bullets do?

Oriel Davis-Lyons and Gustavo Dorietto, creative directors at the New York City-based ad agency Droga5, are developing graphic warning labels for ammunition that are similar to those that adorn cigarette packs in more than 100 countries. Studies have found that such labels, which include close-ups of tumors and people dying of lung cancer, are effective at deterring all but the most nicotine-addicted smokers from buying tobacco.

Davis-Lyons and Dorietto say they want to inform consumers of the dangers that can result from guns, something that’s not currently being done at the point-of-sale.

I’m pretty sure gun owners know what the dangers are a lot better than some ad execs from New York City.

The guy who puts a 168 grain 308 through a deer doesn’t need a graphic ad to conceptualize it.

“Gun violence is a public health crisis, and we need to raise awareness, among both gun owners and non-gun-owners, about the devastating toll it takes on the lives of Americans,” Davis-Lyons told The Trace. Ahead of National Gun Violence Awareness Day on June 7, Davis-Lyons and Dorietto have released a one-minute ad and a website (both of which contain graphic images). They are also promoting the campaign with the hashtag #DontLookAway.

Gun violence is not a public health crisis.  It is a “there is a small percent of criminals who cause all the problems” crisis.  Gun violence does not spread like a disease where anybody who touches a gun has some statistically significant change of becoming infected.

If the campaign reaches a critical mass online, the two hope to leverage its success into a broader push to convince at least one state to require the ammunition labels.

The warning label idea came to Davis-Lyons and Dorietto after the Parkland shooting, which left them feeling “pretty despondent,” said Davis-Lyons, whose past advertising work also includes spots for Hillary Clinton’s 2016 presidential campaign and Amnesty International. “We spend a lot of time thinking about brands and how to make them famous, but how could we do something for this issue?”

Hopefully, this will be like the Hilary campaign, a very expensive loser.

This is what they propose. 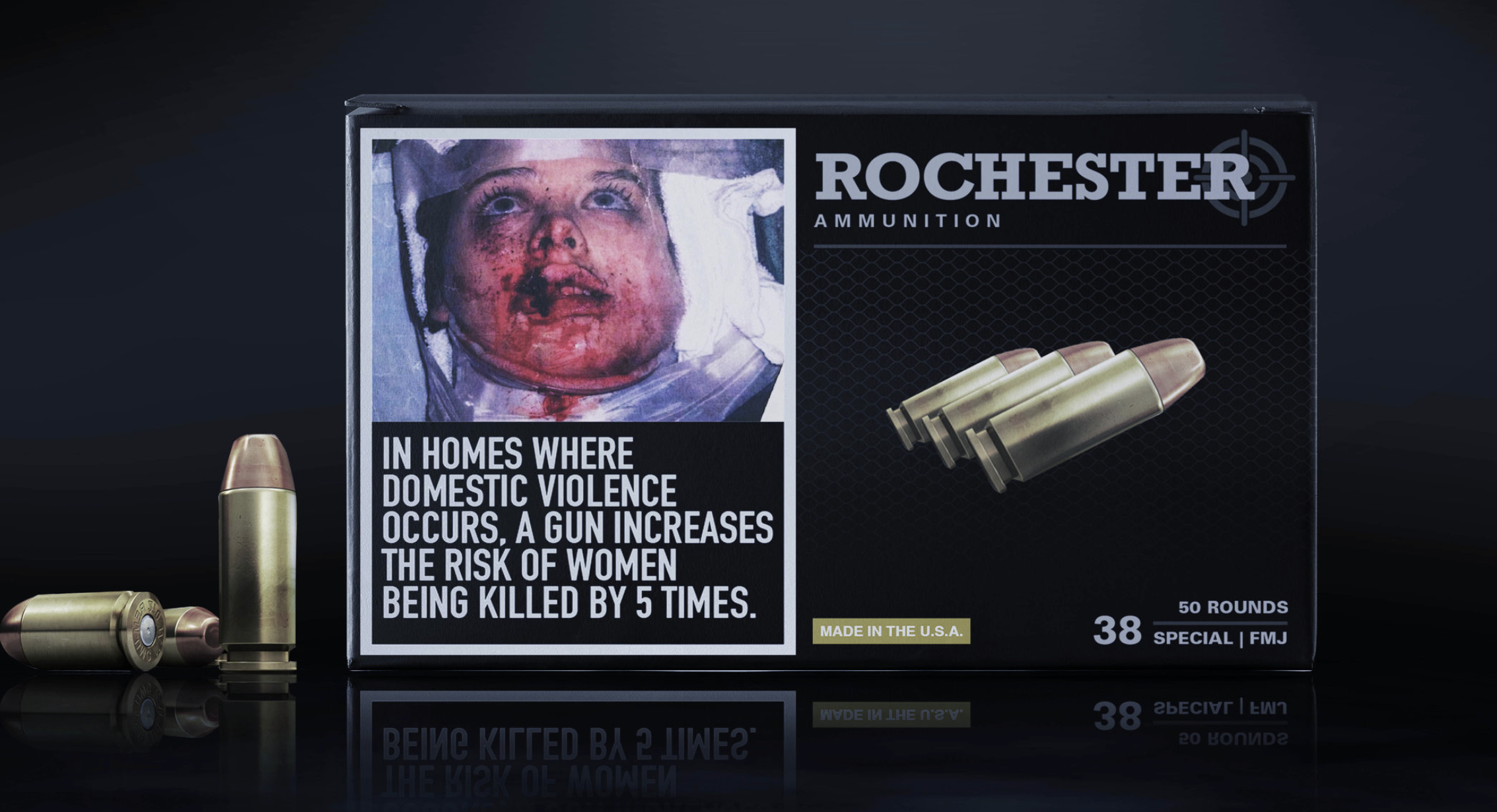 The prerequisite for that is that domestic violence already exists in the home.

I have never laid a finger on my wife in anything but affection.  Making ammo companies apply labels that assume that I am a spousal abuser is just offensive on its face.

And for the unconvinced spousal abuser, will that label stop them from buying ammo?

Mark Oliva, director of public affairs at the National Shooting Sports Foundation, the trade association for the American firearms industry, said that graphic warning labels on ammunition “is not something the industry would support. It would do nothing to contribute to public safety. All these things do is stigmatize gun ownership.”

Joseph Sakran, a trauma surgeon and gun violence survivor who has consulted on the labeling project, acknowledged the likelihood of opposition. “It’s going to be really difficult, because powerful lobbying groups in this country are probably going to make this an uphill battle,” he said.

Because treating law-abiding gun owners like assholes is the real goal here.

How about warning labels in doctors offices that say “Ask your doctor if he washed his hands well enough before he gives you sepsis or MRSA.”

That would also save lives but I assume doctors would hate it.

But Sakran said he feels the concept could prove effective because the focus is on bullets, rather than guns themselves. “I think for a long time no one really thought of focusing on the ammunition piece,” he said. “But if you think about it, the ammunition piece is important, because that’s how people who are either going to commit crimes or are a danger to themselves or others are able to follow through.”

That is some dumb shit.  That is college snowflake liberal “the Constitution doesn’t say you have a right to own bullets, how about a bullet ban” logic.

The concept also approaches gun violence as a public health problem, which is essential for reform, Sakran said, and it requires a multi-faceted approach. “Think of motor vehicle fatalities. In the ‘60s and ‘70s, we didn’t get rid of cars. We figured out how to make cars safer. We came up with seatbelts and airbags and we made roads safer. It’s that same type of approach.”

Again, getting people to wear seatbelts when that was not the cultural norm is different than accusing law-abiding people of engaging in criminal activities for buying a legal product.

Davis-Lyons said he’s consulted with gun reform groups, as well as the American Public Health Association, and believes that attorneys general in each state have the power to implement warning labels on ammunition.

But before he can focus on a trial run, he said he just wants to start the conversation. “People are starting to talk about the need to actually face the reality of what this gun epidemic looks like, but no one has yet found a way to do that in a way that reaches gun owners,” Davis-Lyons said. “So we’re hoping that this is the first step in bringing it to the public.”

How about graphic warning labels against raising boys in fatherless homes?  This is the number one predictor of both gang violence and school shootings.

But I have a feeling feminists groups would protest that.

This proposed warning label won’t save one life, it will just insult law-abiding gun owners to their faces, which really is the point.