And we are off to the races…

As predicted, unholy alliances have begun: 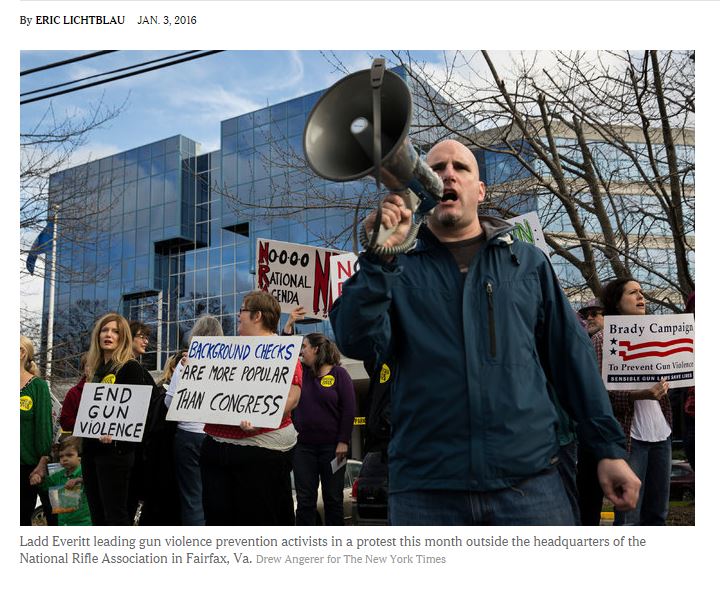 That is Dear Leader Ladd in which appears to be a joined Brady Campaign/CSGV protest in front of the NRA headquarters. Maybe is just a friendly get together of people with equal goals, or maybe there is some sort of strategic alliance from two groups who are very lean on cash.

I wonder if they will ask Gabrielle Giffords and Hubby to join them since they have a decent cash flow.

After that defeat, “we took a step back, and we realized we had to go state by state,” said John Feinblatt, the president of the Everytown group.
Everytown’s big footprint, however, worries even some fellow gun control advocates. They say some local officials in Massachusetts, Rhode Island and elsewhere have resented the perception of a high-profile, billionaire liberal like Mr. Bloomberg trying to change their gun laws.
“I see them as a lightning rod,” said an official with another gun control group, speaking on the condition of anonymity because of concerns about alienating supporters. “They’re stirring up this opposition, and the N.R.A. as a result is putting more resources into its state strategy.”

So there is trouble in Paradise. There is no doubt that Bloomberg’s acolytes are heavy-footed and want to be the only ones in control of the game, something that does not suit the other groups. But Everytown is top-heavy and although they have the money, they need to finesse (lie) to create wins.

Mr. Feinblatt said Everytown was changing the nature of the debate. He likened the focus on the states to the push for same-sex marriage, which began with a small number of states approving it before the Supreme Court struck down the Defense of Marriage Act in 2013 and it spread more quickly.

I am still blinking hard at this one: You want to use the strategies of a minority seeking freedom of association and marriage to restrict the freedom of keep and bear arms? Wouldn’t that be like replicating the Civil Rights Movement to impose Jim Crow laws?

Well, we will see what President Obama brings to the table via Executive Orders. I don’t think it would be much, but I am guessing they want to have some sort of event to jump-start their efforts this year. I expect brutal opposition to Florida’s Open Carry and Campus Carry as they got slapped hard with Texas going OC and they are desperate for a big win to rally their followers.

I know I am gonna make some mad, but the important bill for Florida’s future is Open Carry (CS/CS/HB 163) and if necessary, Campus Carry could be delayed one more season. So, let’s make sure OC is passed and signed in Florida, if nothing more to see the Opposition go nuts.

4 thoughts on “And we are off to the races…”