Anti-Catholic bigotry, more Brett Kavanaughs, and the death of the 1st Amendment

Last week I wrote a post about the rise in anti-Catholic bigotry in the Democrat party and how I believe it was associated with the Catholic Church’s continued stance against abortion.

This weekend went all out to prove me right.

The first story is about some Catholic School kids at the March for Life.

Mocked.  And how did they describe the scene?

A crowd of teenagers surrounded a Native American elder and other activists and mocked them after Friday’s Indigenous Peoples March at the Lincoln Memorial.

The kids surrounded the man.

Videos of the confrontation show a smiling young man in a red Make America Great Again hat standing directly in front of the man, who was playing a drum and chanting. Other kids could be seen laughing, jumping around and making fun of the chants.

They were wearing MAGA hats.

“I did not feel safe in that circle,” said Kaya Taitano, a student at the University of the District of Columbia who participated in the march and shot the videos.

She told CNN that the teens were chanting things like “Build the wall” and “Trump 2020.” Those chants were not audible in videos reviewed by CNN.

Here is one of the videos that CNN released on this.

What came next was immediate attacks from everyone on the Left.

Elizabeth Warren spent years advancing her career by lying about her non-existent Native American heritage.  Arguably that is terribly disrespectful, but being a Democrat means never having to have self awareness, so she Tweeted this. 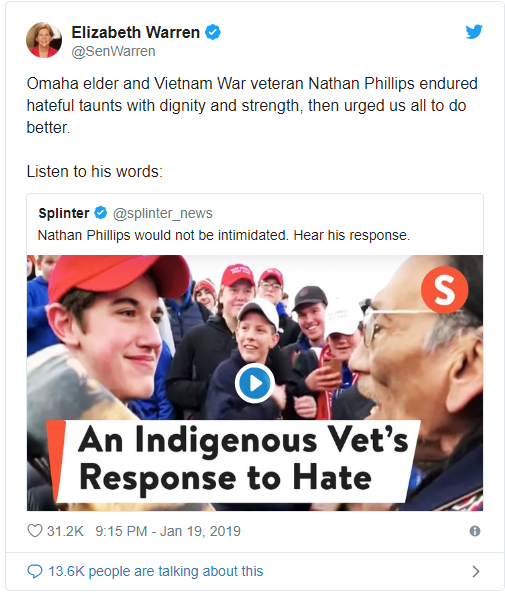 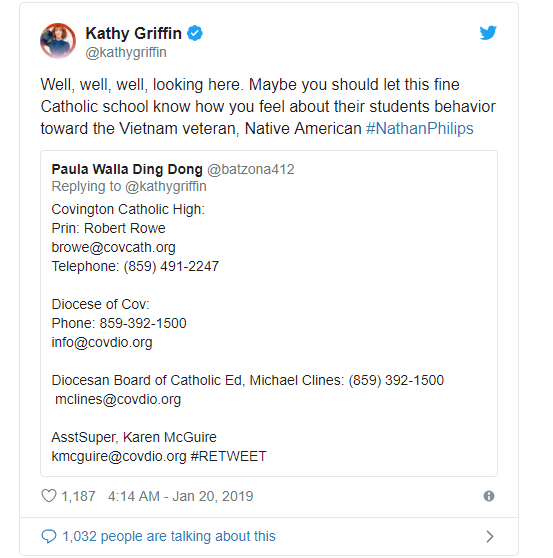 John Yarmuth, the ranking member of the House Committee on the Budget Tweeted this. 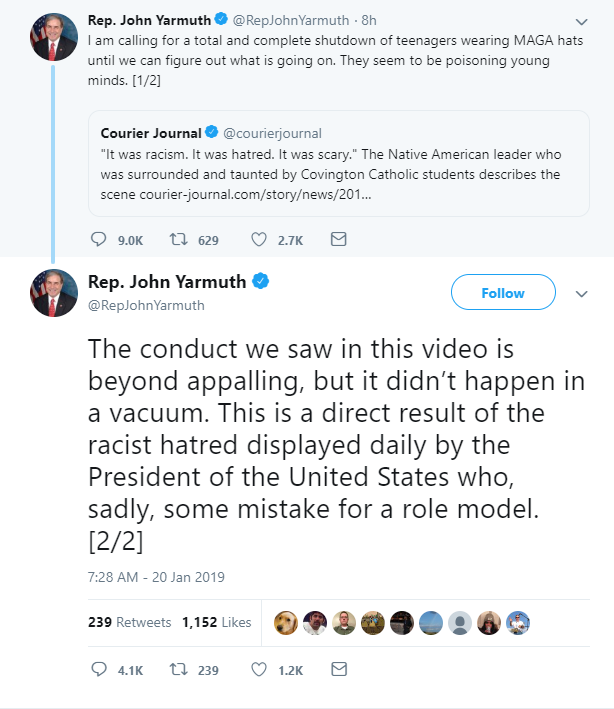 He wants to ban kids from expressing themselves because of Trump, because the First Amendment takes a back seat to TDS.

Here is former governor, DNC presidential candidate, and DNC chair calling a Catholic School a “hate factory” and calling for it to be shut down. 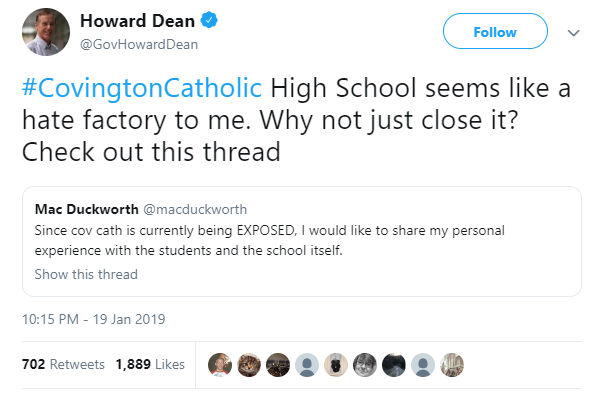 Back to the CNN story:

Taitano said the whole incident started when the teens and four young African-Americans, who’d been preaching about the Bible nearby, started yelling and calling each other names.

It got pretty intense, Taitano said, so Nathan Phillips, an elder with the Omaha tribe, started playing his drum and chanting what she was told was a healing prayer, to help defuse the situation.

Phillips walked through the crowd, and Taitano said things were starting to calm down until he got to the grinning boy seen in the video.

“This one kid just refused to move and he just got in Nathan’s face,” she said.
Other boys circled around, she said. “They just surrounded him and they were mocking him and mocking the chant. We really didn’t know what was going to happen there.”

It turns out that the more video exists.

The “four young African-Americans, who’d been preaching about the Bible nearby,” as it turns out were Black Hebrew Israelites.  If you have no idea what that is, it is a radical group that argues that blacks are the real Jews of the Bible and the Jews of Israel are Devil worshiping imposers.  It is a crazy, anti-semetic, black supremacist group.

They posted the video of their antics online, it has been mirrored and copied to you tube.  If you watch the whole video, or at least start at 45 minutes in, you can see these people cursing and screaming at these kids.

Going to about 1:11 in, you can clearly see the Native American man approach the crowd of kids and start banging his drum in their faces.

More video has surfaced and has been posted to Twitter showing that the supposedly aggressive and taunting behavior by these kids never happened.

No one said "Build the Wall"
& if anything
That kid deserves a peace medal pic.twitter.com/lPbPtQtTh7

Even the AP reported that the kids were not mocking the old man, and this from statements from other Native Americans.

With all the video evidence available, the media and Democrats are still pushing this narrative because they need to destroy a bunch of Catholic School boys showing support for the Right to Life.

If you go on Twitter, comment after comment about these kids is about how they are just like Brett Kavanaugh, i.e., entitled awful racist kids.  Just like in the Kavanaugh case, it doesn’t matter how thoroughly the accusations against Kavanaugh were debunked, the narrative was set and lives are going to be ruined because of it.

Here is celebrity Patton Oswalt dumping on this kid as the next Kavanaugh. 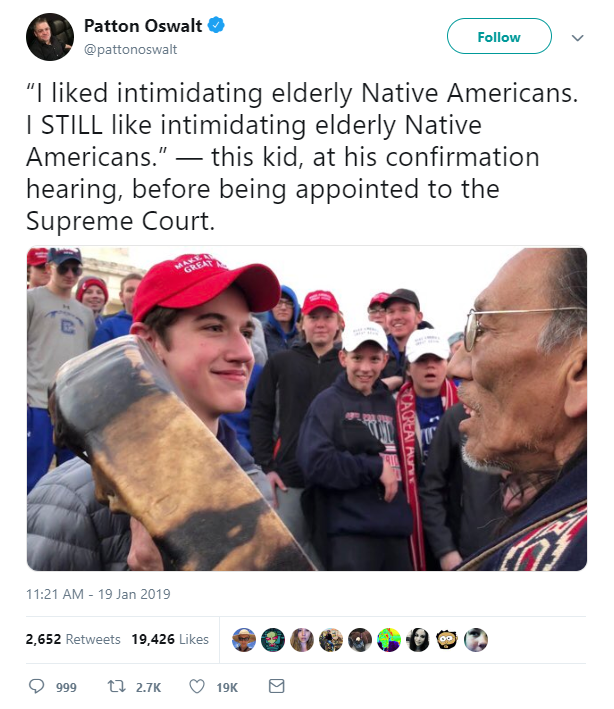 Yes, multiple Hollywood celebrities and Democrat politicians have gone on record with social media attacking this kid over a few seconds of out-of-context video.

Twitchy posted a thread from the brother of one of these kids, Tweeting about the harassment everyone in the family has faced in the last couple of days over this.  People have been contacting the poor boy’s perspective college demanding that they rescind their offer.

These poor kids are going to have this follow them around for life, because the Left decided to engage in a hatched job on some Catholic School boys.

Going all the way across the country to Hawaii, we are back discussing the anti-Catholic bigotry of Mazie Hirono.

Ben Sasse is about a mild a Republican as there is right now.  He’s little better than Jeff Flake was, and is not a Trump supporter.

He did the right thing for once and sought to enhance the protection of religious freedom in this country by reaffirming  the ban on religious tests for office.  Essentially reminding the Senate that holding a nominees membership in a religious organization like the Knights of Columbus, against them is tantamount to holding their religion against them.

This is meaningless except that “alt right” has become like “Nazi,” shorthand for “the Left hates you”

Jew hatred, Catholic hatred, a desire to collectivize the economy and push political indoctrination through free education that mandates ideological coursework (“diversity” classes as required coursework for graduation), exactly what is separating the Democrats from the Nazis of 1936?

6 thoughts on “Anti-Catholic bigotry, more Brett Kavanaughs, and the death of the 1st Amendment”