Semi-retired like Vito Corleone before the heart attack. Consiglieri to J.Kb and AWA. I lived in a Gun Control Paradise: It sucked and got people killed. I do believe that Freedom scares the political elites.
I can't think of a category

Civilian Self Defense Code of Conduct

It is my responsibility to respect Innocent Life. And the first Life to be respected is my own.

No matter how much the Old  Media portray us and how bad other people may think of us, we are no trigger happy crazies, spraying bullets at the slightest chance. If anything almost twenty years of Concealed Carry Permits have shown that Law Abiding Citizens are perhaps the most peaceful and less dangerous group of people anybody can ever meet. We respect Innocent Life for the simple reason we appreciate the toils and labors the average citizen must endure. We understand that they have dreams and aspirations, they have responsibilities of their own that they must fulfill, they have loved ones that he cares for and he is cared from.  We respect that because that is us too. We consider that life precious in the same level we consider our life precious and doing or not doing something that might put that life at risk is morally and ethically wrong.

A Rabbi I met during an NRA Instructor’s class put it very succinctly: The taking of a life in Self Defense is neither morally nor religiously wrong. It is understood and accepted by most religions. However Suicide is considered wrong, one of the foulest of sins that an individual can commit. The same applies at not doing anything to save a life. While it may be legally and morally correct to not intervene in certain occasions (level of death or grave bodily harm to oneself or an innocent life might be too much) doing nothing to defend yourself when able but not doing under the pretense of a false Moral Superiority (“I cannot just bring myself to kill anyone. That is so wrong!”) is the same as Suicide.

I suspect that a lot of those who wave this banner of alleged Moral Superiority are doing so because they are part of an unholy marriage of Cowardice & Convenience. Being prepared to defend oneself is a difficult task which will knowingly forces us to confront the ultimate societal fear of taking a life and the consequences of that might come after it. It is easier to spend your free time enjoying the fruits of your life than worrying about what it may happen if somebody wanted to take it away. It shakes the consciousness and peels away the veils that protect our false sense of security. It is more comfortable to lay the responsibility on somebody else (Police, security) that take it oneself. But at the end, it will be the individual who had the ability but chose not to exercise it the one responsible for the loss of an innocent life.

As civilians we are not offered the opportunity to belong to an established group for support and guidance. So when we take upon ourselves to be responsible for our own self-defense, we do it in solitary. We are castaways left to our own devices and with little guidance but a few lines of the law with almost no interpretation and no idea what we might face.The following is a Code of Conduct that I came up during a boring shift at work. I will never claim to be an expert and please understand so. These are just my observations from what I have experienced personally and from what others have learned. I am just going to post the list and I will expand on each one at a time in following posts.

I have chosen to be the First Responder of my Own Safety so:

This is a work in progress. I am guessing I will be adding or subtracting stuff as I get better at my writing or a kind soul happens to give a hand and improve on it. 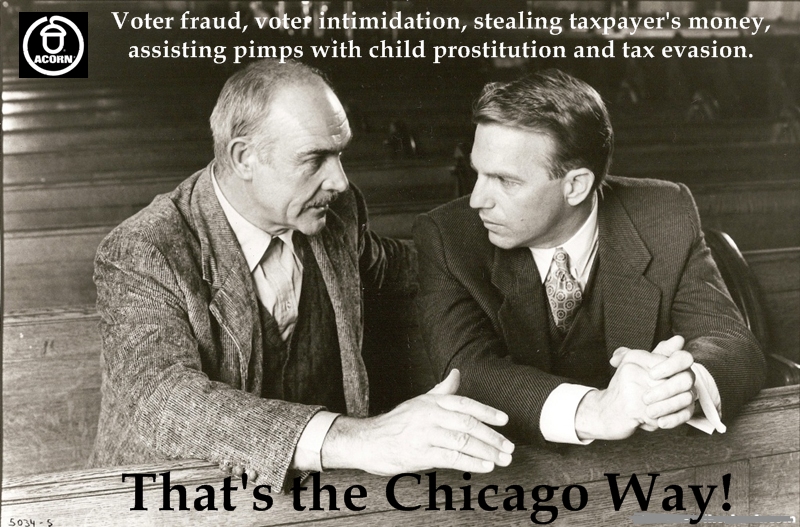 I have a feeling Capone was a much honorable adversary than ACORN.

Nope… It ain’t but helps is available. 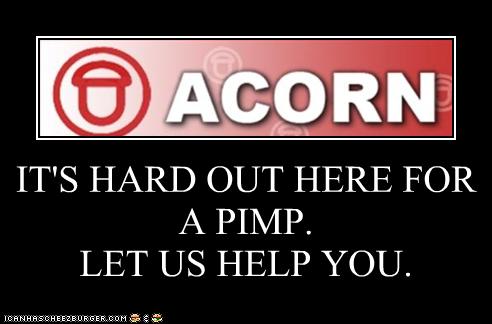 Poor dear Madame Speaker. Hot off the video presses here we see her…well, I am not sure she is emotional due to her constant and voluntary overdose of botox, but she seems to be feeling somewhat emotional.

She is a good politician. She is no coming out and saying: You all rednecks that hate my President have to shut the hell up and bow to the superior intellect.” but you know that is where she is heading. Specially when she mentions the “balance between Safety and Freedom” which whenever a politician mentions it, Freedom takes a serious hit.

Maybe she is finally getting the message that people are tired of their BS. Maybe somebody shook her from her daily reverie to the altar of Noam Chomsky and pointed to her that there is something going on because the serfs are revolting.  Maybe she was only getting her information from the ABC/CBS/CNN/NBC/MSNBC clique who are designed around the ignoring of the facts and the truth and thus missed stuff like ACORN personnel voluntarily agreeing to help pimp underage girls, that Czars are politically positioned to the left of Stalin and believe in population control or to fellow congresspeople who publicly admit their undying admiration for Fidel Castro and Hugo Chavez.

Pelosi reminds us of her sad memories of the violence in the 70s but fail to mention that it was her fellow political leaning terrorist the ones playing with explosives or dealing drugs to further the cause or executing police officers to later be nominated for the Nobel Peace prize.

Maybe too much botox is really harmful to the brain or maybe she is just LYING! Yes, I am gonna use that word before the Liberal Democrats bring back the The Sedition Act.

I am a racist.

According to the great “trustworthy” Mass Media types and with the official confirmation of none other than Super Former President Jimmy Carter, I am now a Racist because I am against the ultra-left wing policies of this administration. That kinda gives you a load of warm-fuzzy, doesn’t it?

How desperate can the Ultra Left must be to be throwing the Race Card around with such agility? Note to the first I-Hate-America-and-I-sucked-as President Jimmy Carter: A majority of voters elected President Obama. So when you state that ““There is an inherent feeling among many in this country that an African-American should not be president.” there tends to be a contradiction with reality, you know, the one that real people live and work? That one you do not seem to understand? Yep, that one.  If a majority of voted for him it would be a good guess that also a majority of Americans is not racist and they are just fed up with the LIAR in a very short time.

I really don’t give a flying crap how the melanine in your skin diffracts light and gives you that particular shade or if you light candles to a particular deity or not or if you engage in private  games involving Crisco, a bottle of milk, a saddle and a tuning fork with a consenting adult (apologies to Return of the Killer Tomatoes) or even your political views as long as they do not interfere with the Rights recognized in the Constitution. However, I am prejudiced to hell against those assholes that swore to protect and defend the Constitution without any reservation or purpose of evasion but they did just that. Yes, I am prefuduiced against Communist Red because my kin lived under the “wonderful” Communist shitholes. I get pissed when members of congress extol the virtues of Fidel Castro and or Administration Czars that consider the Chavez Revolution as a good thing. Against idiots like that, yes I am prejudiced and no amount of sensitivity training is gonna change that.

And before I am outed and before some enterprising young couple disguised as pimp and prostitute go through my account at WalMart Photographic section, I am displaying a picture of a local KKK gathering I just attended locally.

And in case somebody have not figured out yet, I am a Spic A.K.A a member of the “Oppressed” races with a Hispanic background and I don’t give a damn if you want to call me names, but do not condescend me or tell me what’s good for me because you know better. That is the truest form of racism ever designed.

And a class is done.

I guess it is now official: I am a firearms instructor. Two friends from my former job took the plunge and were willing to get the Basic Handgun class. They are expecting to go into Law Enforcement and they were smart to realize their handgun skills were somewhere between none and Black Hole vacuum.

I have to admit it was fun. I do need to polish a couple of points but I feel good about the support material I had prepared… hell I even admit Power Point is a good thing to use as guideline.  Time in the classroom just flew. I had to force myself to keep an eye on my watch for the breaks and not to overwhelm the students with a constant barrage of info. And let me tell you, after a decade and a half of studying, you will have a crapload of info to share. The trick is to decide what info do they need and what they can assimilate then.

Not a bad day at all.  Now gotta find me some more victims students. He He He.