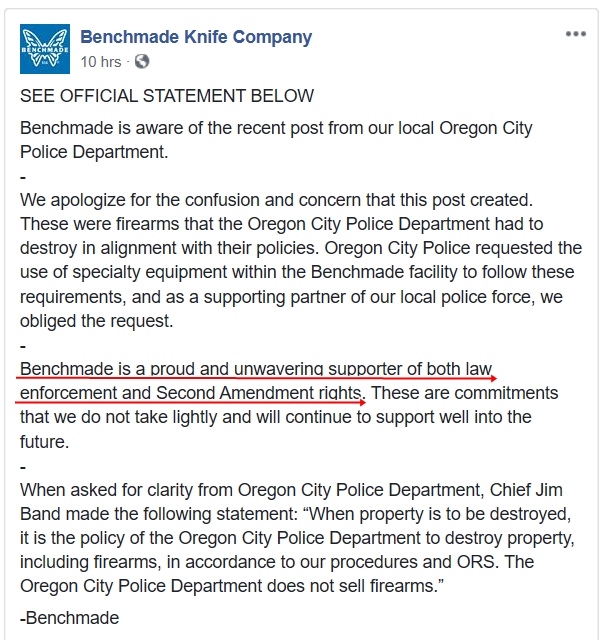 My dad (who was a printer) had a very nifty saying “El papel aguanta lo que le pongas” (Paper holds whatever you want to put (write) on it.” which meant just because it is on paper, it ain’t necessarily the truth.

Although Benchmade did not put it in paper but pixels, the principle holds., so let’s apply another saying: The proof is in the pudding. In my other post about this boondoggle, I shared a link from OpenSecrets.com which posted political donations from Benchmade people, let’s look at them and see how much they supported candidates who respected the Second Amendment, shall we?

Democratic Sen. Martin Heinrich – a hunter and former National Rifle Association member – is pushing gun control measures that would ban bump stocks and deny those on the federal no-fly list the right to buy firearms.Today, the New Mexico Democrat today teamed with Sen. Catherine Cortez Masto, D-Nev., and Jeff Flake, R-Ariz., on a bill to prohibit the sale of bump stock devices and other mechanisms which allow semi-automatic firearms to spray bullets much like fully automatic guns.
Sen. Heinrich pursues new gun controls

Congress must pass commonsense reforms to keep our communities safe, including legislation to: close the gun sales loophole and require background checks on all sales, prohibit the sale of military-style weapons and high-capacity magazines, remove barriers to gun violence research, increase the minimum buying age to 21, ensure better enforcement of current laws and regulations, and more.
Enough is enough. We demand action.
Earl Blumenauer’s website

Rob Cornilles was a 2012 Republican candidate who sought election to the U.S. House to represent the 1st Congressional District of Oregon.

I could not find an official stance of his on Gun Control, only a post from Oregon Firearms Association:

“During the primary, Cornilles would not take a position on gun rights. Some of the other candidates, even those who opposed gun rights, went on the record. Now that the general election is looming, knowing his position on the Second Amendment is more important than ever .”

This one was weird. He carries a B grade from both the NRA and Brady Campaign. Only record I could find was he supported Veterans being able to registering firearms brought from abroad.

Hamilton Creek School eighth-grader Berkley Ringler asked U.S. Sen. Ron Wyden at a Saturday town hall in Albany if he planned to pass bans on bump stocks and assault rifles.
His answer was short and drew some of the loudest applause of the event:
“Yes.”
Wyden on guns: This time is going to be different

The third issue was whether or not to institute an “assault rifle” ban, which was similar to the one that restricted new weapon sales for 10 years, including magazines that would hold more than 10 rounds. There was an overwhelming amount of the public who raised their hands to show they would be against such legislation.
“I’m supportive of those items,” said Merkley. His team found that in every massacre where at least six people died, they were all done with an assault rifle of 50 or more rounds. Merkley disputed the point that a shooter could change out magazines quickly. He also purported that more Americans died from “bullets than they are by car accidents,” causing an uproar of disagreement and a few people leaving the room.
Gun rights take attention at Merkley town hall

Scott Bruun is a Republican politician from the US state of Oregon. He served in the Oregon House of Representatives representing District 37

I can’t find a firm position from Brunn during his tenure. heck, not even a wobbly position and only a very mild “pro-gun” article written by him after he left office.

Those are the names found on that list linked above. You come up with your own conclusions.

7 thoughts on “Benchmade issues damage control statement. Does the company really stand for the Second Amendment?”