That’s why Jersey City will help start to transform the thinking about guns. Police departments are huge buyers of guns and ammunition but have not taken advantage of their power in the marketplace to demand change from gun manufacturers. This has been a missed opportunity that must be — and will be — reversed.

Via A New Approach on Gun Reform — Let’s Get Started. Huff-Po.

As far as I could quickly gather from the net, there are just over one million local, state and federal law enforcement officers in the USA. If they were to buy guns today for every each one of them, that would be one million firearms to cover every cop in the country and that would seem an awesome purchase order…. then again maybe not.

In another Huff-Po article (I guess they can’t do math either) we find out that in 2012 the FBI conducted 16.8 million background checks for gun purchases. That is at least 1,400,000 per month sold in the US to private citizens paying in some cases full retail during the gun frenzy. We are talking that providing a gun to every law enforcement officer in the US would be the equivalent of about a little more of 3 weeks worth of sales in the US. No business in the world will submit themselves to lose over 90% of their income to satisfy a political idiot trying to grandstand himself on this week’s Blood Dancing Marathon and Bloody Shirt waving.

Major Steven Fulop must be a close friend of Eliot Spitzer who actually proposed the same stupid thing last year. How can they run anything with taxpayer’s money if they can do some simple comparative math? 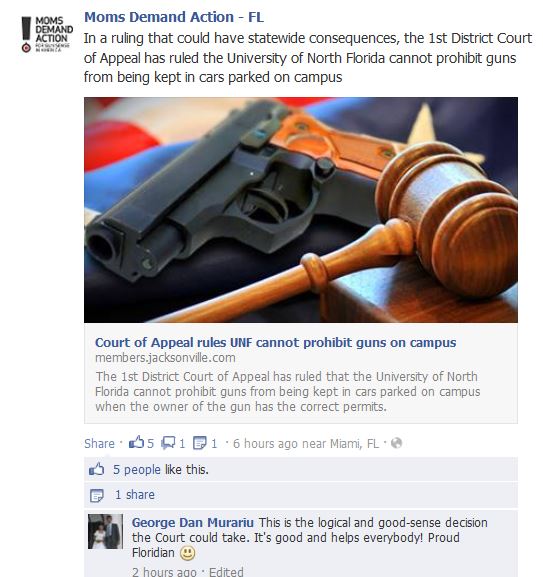 In a ruling that could have statewide consequences, the 1st District Court of Appeal has ruled the University of North Florida cannot prohibit guns from being kept in cars parked on campus.

The university had banned the storage of any “weapon or destructive device” on college grounds and said any student who violated the rule could face discipline up to suspension or expulsion.

The gun-rights group Florida Carry Inc. and UNF student Alexandria Lainez sued arguing the university didn’t have the right under Florida law to ban firearms because the state Constitution gives that power to the state Legislature…..

…….Circuit Judge L. Page Haddock agreed with the university and threw out the lawsuit. He also denied a request for a temporary injunction that would have allowed Lainez to bring the gun onto campus while the issue was argued in court.

In his ruling Haddock found that the law allowing schools to prohibit guns on campus applied to universities and all other schools.

But the appeals court, in a 12-3 majority ruling written by Justice L. Clayton Roberts, disagreed.

The law grants school districts, not colleges or universities, the right to prohibit firearms, Roberts said.

I don’t know what other implications it may have other than being applied to other locales of higher learning, but it was a sweet case and sweet victory for students, Floridians  and Florida Carry.
PS: The comment made on the Moms Demand Fl. might disappear soon  enough as it will be considered “abusive trolling and a threatening message.”

You can trust the Press about Guns.

Because, you know…they are well-informed in all subjects they cover, right? From an article in the Vancouver Sun. 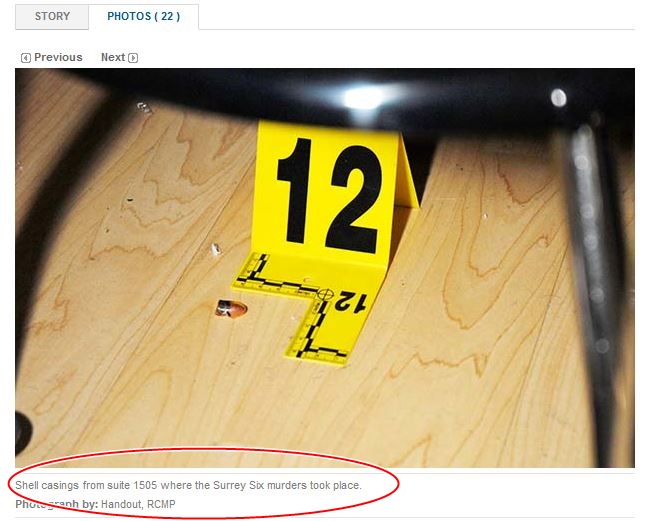 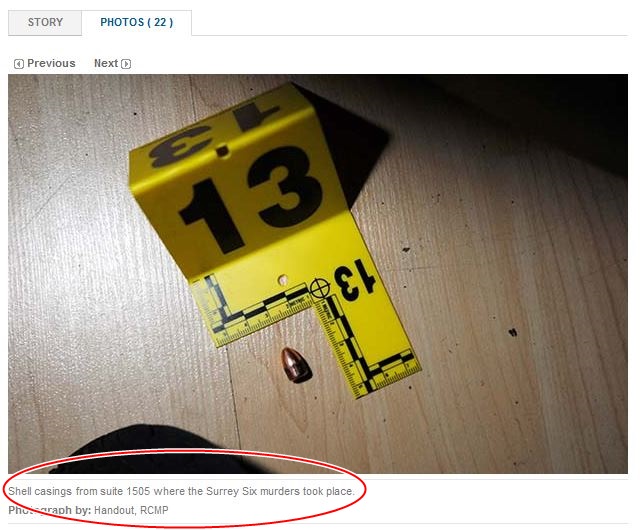 So Honduras has a Crime Problem….it must be Guns.

The Honduran constitution doesn’t enshrine a “right to bear arms” like the 2nd Amendment does, but gun laws have been historically lax in Honduras. The chief restriction is a law that limits an individual to owning just five firearms, but that’s lightly enforced at best. Successive governments in the 2000s theoretically tightened Honduran gun laws—a national registry was created in 2002, assault weapons were banned in 2003, and it’s been technically illegal to carry guns (openly or concealed) in public since 2007.

So there was a crime problem, they imposed Gun Laws and the crime problem increased. I would have never thought that was possible!

I checked Honduras’ Gun Laws to see how lax they are and they have that wonderful cornucopia of BS we expect to see from gun control idiots: From registration to forbidding ammunition handloading to ballistic fingerprinting. Curiously, if you are a government official or in the military, you are exempt from these laws as they were created for the peons.

Gun Control: Because actually going after the causes of crime is for people with testicular fortitude.

Banning all guns: The Myth of re-bottling the Genie

Backyard arms trader Angelos Koots admitted making up to 100 of the perfectly constructed MAC 10 machine guns – more commonly seen in war zones and believed to have been used in Sydney gang shootings – at his Seven Hills house.

The guns, sold with two magazines and a silencer, were of such quality that during “Mythbuster” style tests alongside a genuine MAC 10 they fired 600 rounds a minute.

via Jeweller Angelos Koots admits to making sub-machine guns at his Seven Hills home and supplying them to bikie groups | thetelegraph.com.au.

I know it is a cliché, but where there is a will there will be a way. To think otherwise is stupid and a waste of time and resources.

UPDATE: Go check Elfward, the Elf on a Shelf. It is worse that we thought! 😀

It seem there is a thing about an Elf behaving badly and having his picture taken misbehaving. Maybe Santa needs to be notified. 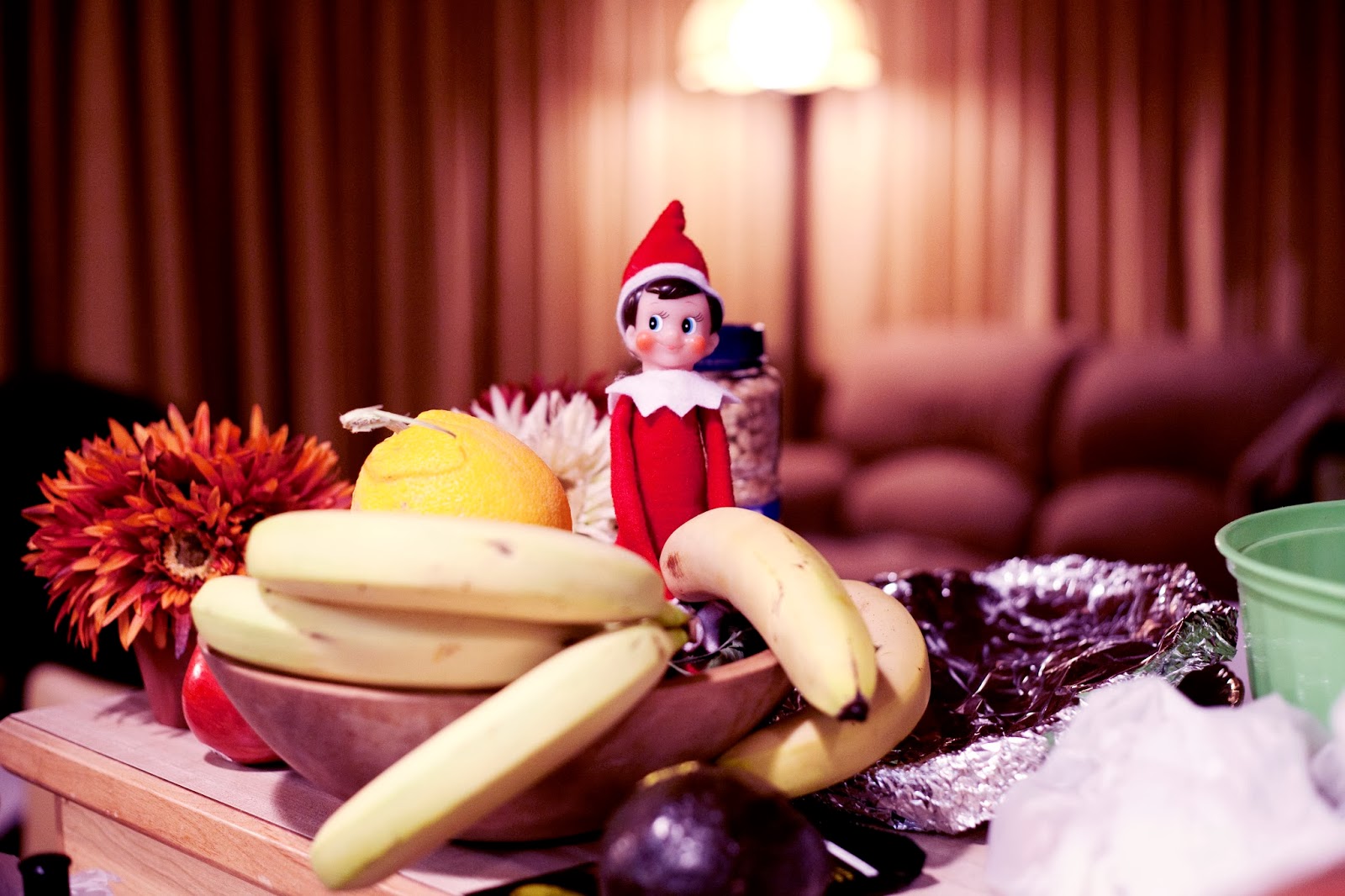 He obviously has a substance problem and it ain’t sugar cookies.