Redneck repairs are universal.  The Spanish language has a word for it: Chapuza. And ladies and gents, I am a graduate from the Redneck Chapuza College.

The freezer door of our fridge of 30 years was hot to the touch, specially around the gasket-thingy area. After the obligatory Google search, I found that it could be one of two things” The refrigerator condenser fan gone kaput or a lot of crap down there that was impeding the flow of air.

Now, this is me we are talking about and a fridge from the last century, so it ended being both problems. I cleaned up as much as I could and removed so much matted cat hair that for a moment I thought it was fiberglass padding or a filter. I guess three decades of kitties do leave a trace behind them.

Next I tried to figure out how to replace the fan and had to come to the sad conclusion that I would have to hire somebody since there was some tubes with cooling in the way and there was a good chance I’d screw it up big time with the obligatory beat up by the missus for losing all the food in the fridge or having to rush to the Big Box store to buy a new fridge and the suckers do not come cheap.

So, while trying to figure out what to do, I decided to test the efficiency of a clip on small fan I bought years ago for work.

Here is the experiment: 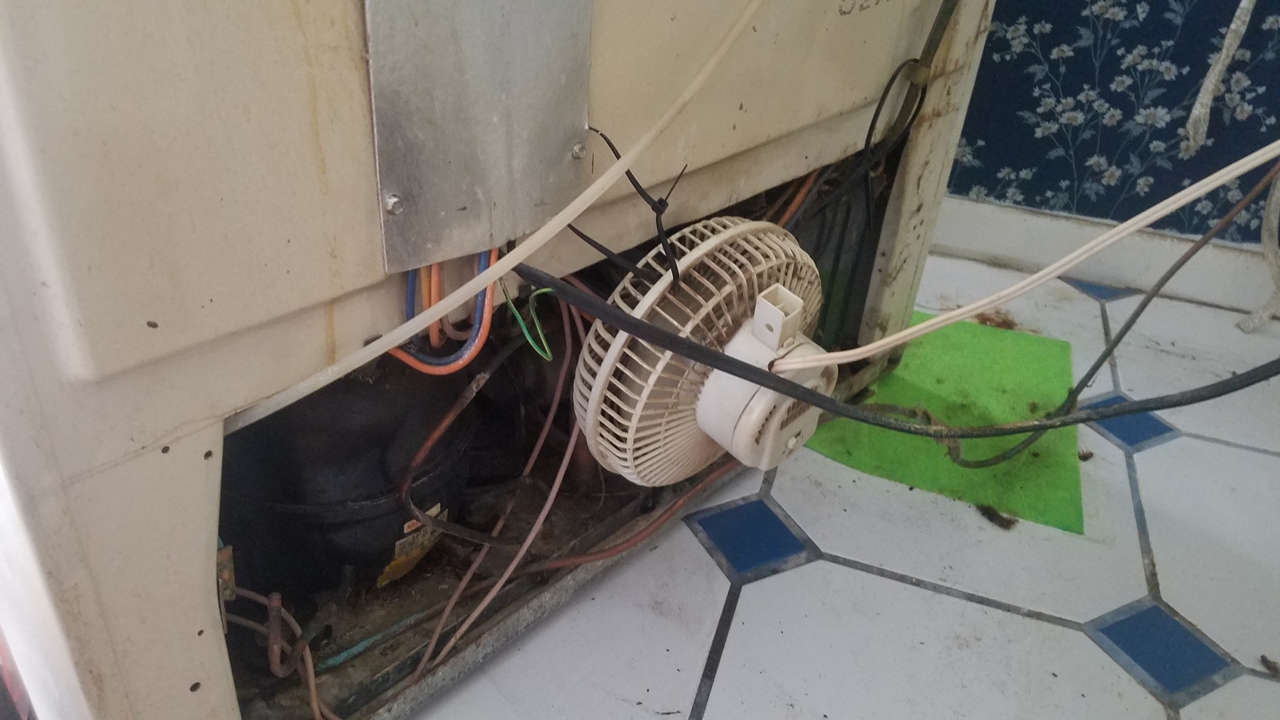 It is aiming at the general direction and not directly at the coils, but guess what? 10 minutes later the door of the fridge was no longer hot.

Obviously this is just a temporary fix. I saw there is almost 2 inches of space between the dead fan and the coils and the dim lightbulb lit. I just ordered a $16.99 muffin/axial fan for ventilation projects pushing 51 cfm and of the 120 AC persuasion. It is small enough to fit in the available space and figure it will push enough air to keep everything cool. Only drawback is it will never stop, but it is low noise, rated for 7 years and hidden inside the fridge so, who cares?

I’ll let you know how the substitute fan works after installed.