From CNN: NRA and some other nonprofits will no longer need to identify their donors to the IRS

And the screen grab 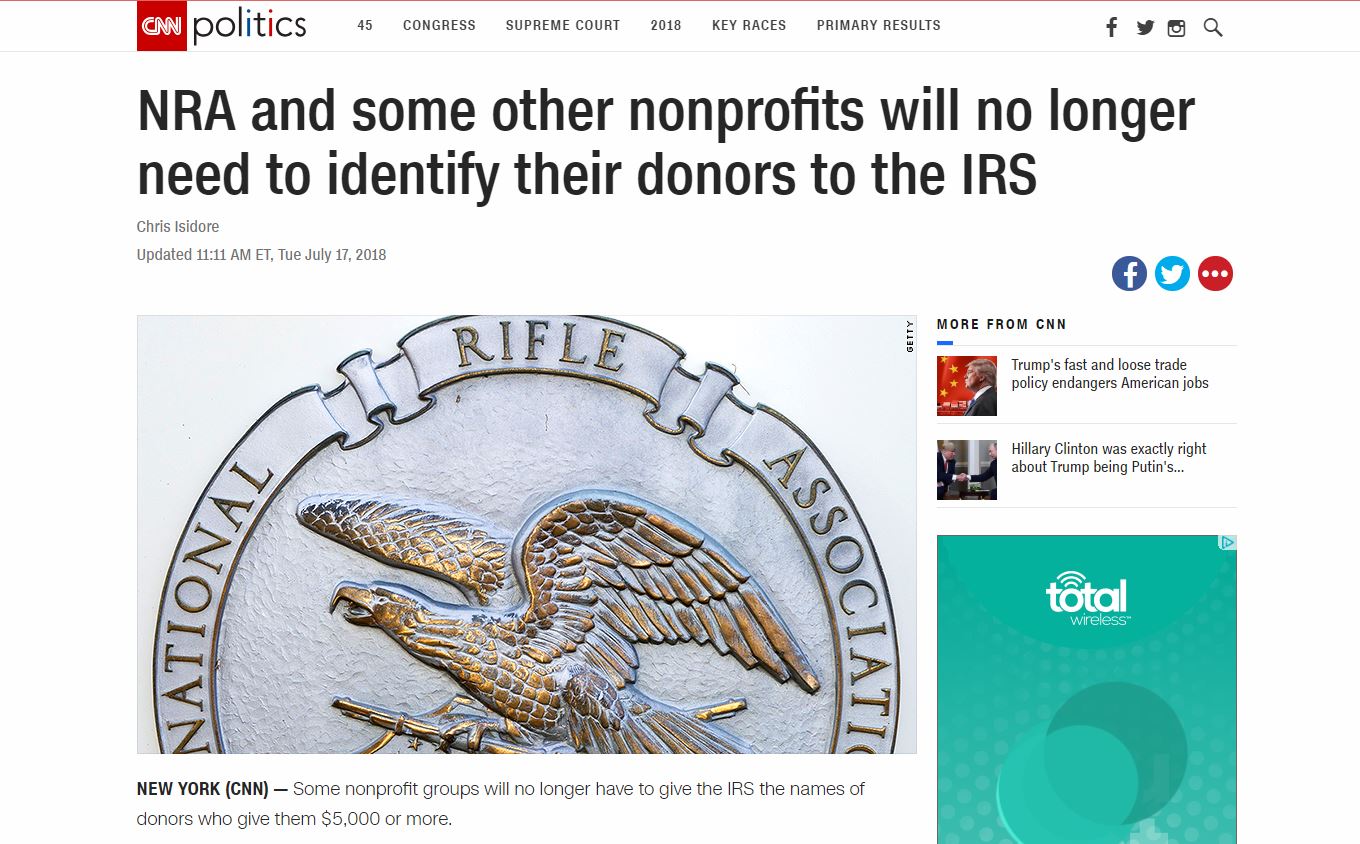 Oh no, the Russians will be able to donate the NRA and we’ll never know.

The IRS is conspiring with Trump and the Russians now too.

Some nonprofit groups will no longer have to give the IRS the names of donors who give them $5,000 or more.

Among the groups that will no longer have to report donors are the National Rifle Association, various chambers of commerce, and groups focused on particular issues, such as Americans for Prosperity, which has been closely associated with the Koch brothers.

Those damn, cheating conservatives.  They have figured out how to steal elections with “dark money” donations.

But the ruling also applies to groups like the NAACP, labor unions and volunteer fire departments.

It was a long-sought goal of some of those groups — particularly on the right.

The Treasury Department, which announced the rule change late Monday, said that information was never subject to public disclosure. Although the tax returns of nonprofit groups are public record, the information on donors’ names had to be redacted before their release.

Senior Treasury officials said that donor lists have inadvertently been released in the past, and groups on both the left and the right had worried that people would be reluctant to make donations if they were worried their names would become public.

Allow me to explain to the social media terrorism supporting assholes over at CNN exactly why this is good fucking law.

Burn that name into your fucking brains, Lefties.

Brendan Eich was one of the founders of Mozilla Firefox.  He was CEO of the company he helped create for 11 days.

Because the human shit stains to write for the ass-wipe The LA Times published that Brendan Eich donated $1,000 to Prop 8 against gay marriage.

The published his name, employer, and donation amount.

As a result there were protests against Firefox.  The dating site OK Cupid made it so Firefox users would get harassed with popups if they accessed the site.

Eich was forced to step down, despite it never having been alleged that he discriminated against anyone, for a donation.  For a political contribution he was pilloried in the media like he committed an anti-gay hate crime.  To the radical Left, he did.

So when Conservatives want privacy for their political contributions it’s because we know how you fuckers act.

You already cheered on the public harassment of Trump staff.

The media has in the past published the names of all the gun permit holders in NYC.

What happens when you shit rag site publishes the names of all the NRA donors in NYC or San Francisco or Portland or Seattle or DC so they get harassed and fired by their tolerant Liberal neighbors and bosses?

That’s what they want and that’s why they have to treat this like it is terrible.

They want the power to destroy people for their political donations to silence the opposition.

The Republicans took that away from them and now they are going to slant the truth to make the NRA look bad.