How much worse can they get?

In the wake of the Kavanaugh confirmation, we’ve seen news outlets and Lefty celebrities give the Democrats advice on what to do about their defeat.

None suggest that the Democrats take a more moderate approach, try to understand why their grievance politics are so offensive to so many people. 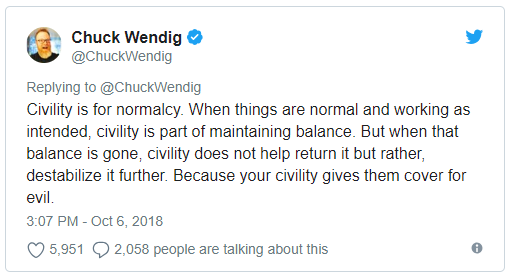 The Left threw civility out the window with the accusations of gang rape, cornering Senators in offices, and willingly getting arrested in the Senate building. 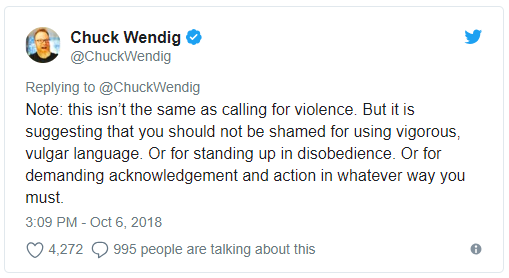 Except it is a call for violence, because the protesters stopped just short of that.  Disobedience was used and it got Flake to delay a week and Murkowski to vote present.

Or this headline from Politico:

Democrats Fear They’re the Wet Rag Party
Kavanaugh’s victory leaves many on the left saying it’s time to get mad—and even.

How much more mad could the Democrats have gotten?

Furthermore, considering how the way their anger manifested has caused any lead they had in polls for the 2018 election to evaporate, if they lose seats in November, how will they get even?

A belief in one’s own virtue feels good. Losing a battle that could shape the American political landscape for decades feels bad. The tension between the two left some Democrats grappling anew this weekend with the implications: Maybe they really are the Wet Rag Party.

“They are more ruthless,” said Jennifer Palmieri, who over a quarter-century has served as a top aide to Bill Clinton, Hillary Clinton and Barack Obama. “And I don’t want to be like them. … The answer can’t be for Democrats to be just as cynical.”

She means that the Republicans are more ruthless and the Democrats must act like that.

Funny that, because I don’t see Republicans Tweeting things like this:

It’s not just about political victories, it’s about ruining lives.

Is this the new Democrat standard.  Stand up to them and you will be destroyed in private?

This is more or less the Michelle Obama Doctrine, as articulated at the 2016 Democratic convention, just a few weeks before Hillary Clinton lost to Donald Trump: “When they go low, we go high.” Post-Kavanaugh Democrats interviewed this weekend aren’t exactly repudiating this idea—but they are qualifying it in important ways. As they articulate it, their answer is to be more realistic about what they see as Republicans’ strategy to disregard principle and process in their pursuit of power—as they argue the GOP did in ramming through Kavanaugh despite accusations of sexual assault—and more disciplined in a long-term way in fighting back.

So the chants of “shame,” the vagina costumes, the Handmaids Take outfits, the waiving and mailing of coat hangers to Senators, the screaming hysterics was going high?

When he worked as an aide to President Bill Clinton, Emanuel said, he often heard Clinton’s view that ever since Lyndon B. Johnson and Vietnam, Democrats have had “a physical allergic reaction about exercising power in pursuit of your goals.”

I’m aware that the Democrats suffer from projection, but this is historical revisionism.

But the example of Michael Avenatti highlights a tension for Democrats. As he flirts with an improbable 2020 presidential run, the lawyer for Stormy Daniels says his motto is: “When they go low, we hit harder.” People on both sides of the nomination fight said he probably helped Kavanaugh by introducing less credible allegations, showing that scorched earth isn’t necessarily fertile ground for Democrats.

I’m not sure they learned that, and if they did it’s only in hindsight.

Emanuel, who recently decided not to seek reelection in part because of dissent from his leadership within his own party, doesn’t frame it so starkly. “It’s not about being meaner and more vicious than the other side. It’s being tougher and ruthless about achieving your real mission” on policies, he told me.

Ruthless?  Like hounding opponents out of restaurants, having interns doxx them, or sending them death threats?

Amid Kavanaugh furor & threats to mbrs, Sen. Cory Gardner (R-CO) tells Fox that his wife received a text with a video attachment showing a gruesome beheading. Someone has has also released the names of and addresses of his family members.

This entire OpEd basically ignores every Democrat dirty trick.  Remember that Obama became a Senator because his people got his opponents sealed divorce opened to the media.

The Democrats are just upset that for the first time the Republicans stood up to the dirty tricks.

This is no different than their complaints about the electoral college.  As soon as they lose because they overplayed their hand (taking Wisconsin and Michigan for granted), they bitch about the rules and how the GOP doesn’t play fair.

It was Harry Reid that ended the 60 vote rule for SCOTUS nominations because the Dems thought that they would never be in the minority again.

The question is how much worse can they get?

If this confirmation hearing was the Dems being a wet rag and holding it back, I don’t want to see them being “ruthless.”

8 thoughts on “How much worse can they get?”