I can’t fault him on handgun choice

I caught this one over at The Firearm Blog.

King Abdalla II of Jordan and his SIG MCX

In this video, King Abdalla II of Jordan is participating in a vehicle tactics demonstration with his son, Hussein, who is also a crown prince and the heir to the Jordanian throne.

First thing to note is the  fact that King Abdalla isn’t running around firing an AK into the sky like their Arab neighbors*.

What The Firearm Blog fails to mention is that King Abdallah II trained at the Royal Military Academy at Sandhurst, the same school as Princes Harry and William, is a 35 year veteran of the Jordanian military, and commanded Jordan’s special forces unit.

The  other thing that caught my eye about this video is that the King runs a 1911. 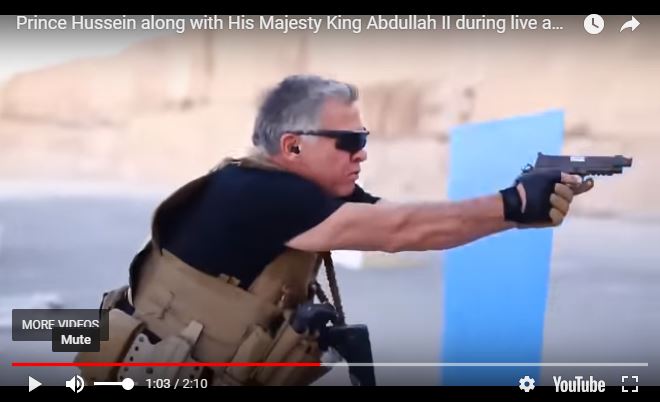 The man has the entire defense budget of Jordan at his disposal to get whatever he wants and he runs a 1911.

I have to give him props for that.

It’s good to be the king.

*If you want to understand Saudi Arabia, what you need to do is think of the worst, redneck trailer park imaginable, winning the Powerball when it hit $900 million.

Before Saudi Arabia was known for it’s oil, it was a desert shit-hole of nomadic tribes murdering each other over camels and goats.  There is virtually no arable land in the country and very little water for irrigation.  Without a strong history of agriculture, the industrial revolution passed right over it.  Unlike central Asia, there were not many long distance trade routes that passed through the lower part of the peninsula for large commerce hubs to be developed.

It was an impoverished national of tribal violence with no appreciable value to Western Civilization.  It sucked so much even the British didn’t want it to be part of their Empire.  King Al Saud united the country in the 1920’s.

Then oil was discovered in the 1930’s.  Foreign oil developers were brought in because the Saudis had no education or industrial know-how of their own and the country became wealthy practically overnight.  Every member of the royal family (this being a tribal nation means just about every cousin that can trace linage back to Al Saud) gets a cut.

The normal social development that a nation goes through to go from tribal backwater to First Wold rich never happened there.  Money just poured out of the ground by the billions.

So the opulence and the idiocy go hand in hand.  It’s hyper nouveau riche.

Saudi Arabia is every idiot, inbred, toothless, jobless, illiterate,  meth smoking, piece of trailer trash garbage who ever went out back to shoot up an old car while drinking Keystone Lite (the Saudi royal family are notorious drunks and drug users), except with the revenue of one-fifth of OPEC at their disposal.

5 thoughts on “I can’t fault him on handgun choice”