This is a current bill in Congress with all Democrat co-sponsors:

This is the text of the bill in its entirety:

“(a) Establishment Of Standards.—

“(A) RULEMAKING PROCEEDING.—Notwithstanding section 3(a)(5)(E), the Commission shall initiate a rulemaking proceeding under section 553 of title 5, United States Code, within 90 days after the date of the enactment of this section to establish—

“(i) a consumer product safety standard for firearm locks; and

“(B) FINAL RULE.—Notwithstanding any other provision of law, including chapter 5 of title 5, United States Code, the Commission shall promulgate final consumer product safety standards under this paragraph within 12 months after the date on which the Commission initiates the rulemaking proceeding under subparagraph (A).

“(C) EFFECTIVE DATE.—Each final consumer product safety standard promulgated under this paragraph shall take effect 6 months after the date on which such standard is promulgated.

“(A) are sufficiently difficult for an unauthorized user to de-activate or remove; and

“(B) prevent the discharge of the firearm unless the firearm lock has been de-activated or removed.

“(3) REQUIREMENTS FOR FIREARM SAFE STANDARD.—The standard for firearm safes promulgated under paragraph (1) shall require firearm safes that reliably secure firearms from unauthorized users, and include reliable security features, quality, and construction to reliably prevent unauthorized users from gaining access to a firearm by damaging or physically manipulating the safe.

“(b) Certain Provisions Not To Apply.—

“(1) PROVISIONS OF THIS ACT.—Sections 7 and 9 of this Act do not apply to the rulemaking proceeding under paragraph (1) of subsection (a).

“(2) FIREARM LOCK.—The term ‘firearm lock’ means any disabling or locking device that is not built into the firearm at the time of manufacture and that is designed to prevent the firearm from being discharged unless the device has been deactivated or removed.

“(3) FIREARM SAFE.—The term ‘firearm safe’ means a container that is advertised to be used to store a firearm and that is designed to be unlocked only by means of a key, a combination, or other similar means.”.

(b) Conforming Amendment.—Section 1 of the Consumer Product Safety Act is amended by adding at the end of the table of contents the following:

At face value, I cannot find anything wrong with this bill.

But… the bill was sponsored by Rep. Elliot Engle (D-NY) who is a notorious anti-gun asshole, and all the co-sponsors are Democrats.

That automatically raises my hackles.

Understand that there is already an industry standard for trigger locks.  It is ASTM F2369 – 19a – Standard Safety Specification for Non-Integral Firearm Locking Devices.  If falls under ASTM working subcommittee F15.53.  Let’s just say, readers of this blog might know someone who is a member of that subcommittee.

I am more suspicious about the term “firearm safe” because most “safes” aren’t safes.  There is another industry standard, this one by Underwriters Laboratory, for a Residential Security Container (RSC).

If you buy a gun safe at a store, it should have at a minimum, this sticker on the inside of the door. 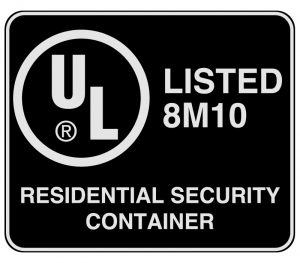 UL has safe ratings that start at B and go up to TXTL60x6.

This is important because insurance companies will only insure cash or valuable up to certain dollar values in various levels of secure containers.  If you lock a million dollars in diamonds inside one of those $99 lock-boxes from Wal-Mart that mostly plastic and sheetrock filler and it gets stolen, your insurance company is going to tell you to pound sand.

Prior to the change, there was a one-size-fits-all level of performance for RSCs: a five-minute attack test using common hand tools.

The standard was upgraded:

Attack level one requires the product to withstand a five-minute attack by one technician using common hand tools such as drills, screwdrivers and hammers. If the product successfully performs to the minimum requirements, it is eligible for certification.

Attack level two products must be able to withstand a ten-minute attack by two technicians who use more aggressive tools such as picks, high-speed carbide drills and pressure applying devices. In addition, the technicians will attempt to make a six-square-inch opening in the door or the front face of the gun safe; the product must resist their efforts.

Attack level three also gives two technicians a ten-minute window to perform the test, but the range of tools become even more aggressive. Additionally, the size of the maximum attack opening shrinks significantly from six-square-inches to two-square-inches.

Once you start to get into this level of safe, you are looking to spend $10,000 or more.  The safe weighs multiple tons, and usually made of two layers of steel filled with poured high-tensile strength refractory concrete.

I go into all of this because the gun and gun storage industry takes this seriously.

So when Congress decided to make the Consumer Product Safety Commission set standards that say:

Gun locks should be “sufficiently difficult for an unauthorized user to de-activate or remove” and gun safes should “reliably secure firearms from unauthorized users, and include reliable security features, quality, and construction to reliably prevent unauthorized users from gaining access to a firearm by damaging or physically manipulating the safe” what standards are they going to create?

(Now is where I get mad)

I know people with YouTube will bring up the Lock Picking Lawyer.  Let me tell you, as an engineer on ASTM committees and who lives my life by ASTM standards.

The Lock Picking Lawyer is a God-damned, son-of-a-bitch, motherfucking asshole.

Yes, there is a lot of garbage out there.  I will not deny that.  But a guy who spends years studying and testing locks, buying and making all sorts of specialized equipment for picking locks, is not the norm for home security threats.  But he makes it look easy and people get an unrealistic idea of what security means.

I find it fucking infuriating to get into conversations with these people.

“But, but, but… the Lock Picking Lawyer broke into a tubular lock pistol box in three minutes.”

Fuck you.  The thief ransacking your house so he can buy meth is not running around with a tubular lock picking tool just in case he comes across a pistol box.  Neither is the five-year-old I don’t want touching my bedroom gun.

ASTM standards are intended to meet the threat of someone with a screwdriver and a wire cutter who wants your gun so he can trade it for some fentanyl, not Ocean’s 11.

Here is my worry.  It is the law that guns are sold with trigger locks. If the CPSC makes the trigger lock standard too high, it could make it difficult for gun companies to comply with the law by limiting their access to locks or making locks very expensive, and passing that cost onto the customer (imaging adding a $100 lock to the cost of every gun).

With safes, I see the same issue in states with mandatory safe storage laws.

I believe deeply in buying a high quality, overbuilt safe, but many people can’t afford a multi-thousand dollar safe.  So if the CPSC sets a standard that high, and states mandate that safe storage require a CPSC rated safe, then a simple $50 lockbox cable locked to bedframe or an eye-screw in a stud*, which is enough to keep one pistol out of the hands of a child is suddenly against the law.

Maybe I’m just being a little too tinfoil behatted, but there are already industry standards that the industry follows.  I don’t understand why the Democrats need a regulatory body do study this and what they plan to do with the information.

* Double eye-screw lock method.  A cable lock can be made very secure to a wall using two eye-screws.  Get two eye-screws, at least 1/4 inch diameter with at least 3 inches of thread length.   Drill two holes in your stud or floor joist about an inch apart.  Screw in the two eye-screws next to one another.  Use a lock to lock both eye-screws and the cable lock together.  That will double the pull out rating of the screws and prevent someone from unscrewing the eye-screws since they can’t be rotated without unlocking them.

Doing this in a closet lets you put a cable locked lockbox on the shelf with less of a chance that the whole box will walk away.