I found my breaking point in Texas

H.L. Mencken wrote “Every normal man must be tempted, at times, to spit upon his hands, hoist the black flag, and begin slitting throats.”

So I ask myself, at what point will I start slitting throats?

What has to happen such that I say to myself “by the end of today, there are going to be a lot of dead people because of me?”

This story from The Federalist.

Six-year-old James is caught in a gender identity nightmare. Under his mom’s care in Dallas, Texas, James obediently lives as a trans girl named “Luna.” But given the choice when he’s with dad, he’s all boy — his sex at birth.

In their divorce proceedings, the mother has charged the father with child abuse for not affirming James as transgender, has sought restraining orders against him, and is seeking to terminate his parental rights. She is also seeking to require him to pay for the child’s visits to a transgender-affirming therapist and transgender medical alterations, which may include hormonal sterilization starting at age eight.

One of the operative words in that excerpt is “Dallas.”  Texas may be seen as a Red State, but Dallas is strong Blue.  Below is a map of the 2016 Texas election results. 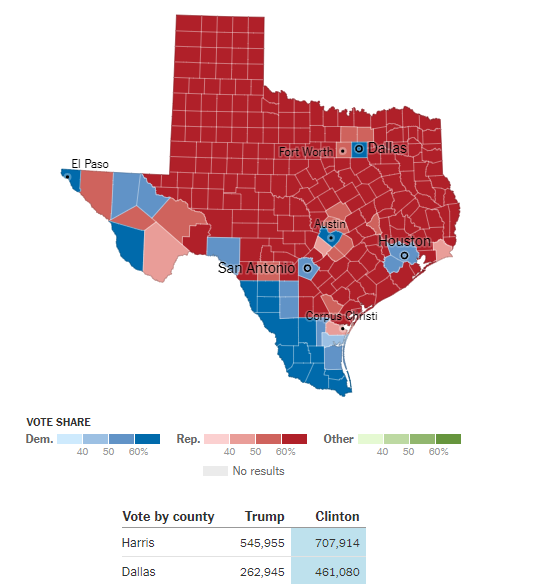 The website SaveJames.com which was set up by a family friend of James’ father contains a PDF of all the court documents. so you can read them yourself.  The About page gives a succinct synopsis of James’ plight.

Our friend Jeff has twin 6 year old boys, James and Jude. Jeff is currently in a very tenuous custody battle as he and his ex-wife each fight for full custody. When the boys were 3 years old, Jeff’s ex-wife decided that James should not be a boy. She began dressing him as a girl, calling him by the name “Luna” and enrolled him in “social transitioning” therapy to prepare him for chemical castration. This process can begin at age 8. She has enrolled him in Coppell Schools as a girl. He is currently in 1st grade. The teachers and administrators know that he is a boy, but the other parents and students are unaware.

Courts have enjoined Jeff from dressing James as a boy at school, from teaching him that he is a boy, and from sharing religious teachings on sexuality and gender. He has been accused of abuse for saying that his son is a boy.

James can choose how he wants to dress when he is at home – and when he is with his father, he chooses to be a boy.

The Federalist article sheds some more light on the situation.

So the counselor is a radial activist.

The transition therapist has observed that James is not consistent, insistent, or persistent in the desire to become “Luna.” For example, a dossier filed with the Dallas court says that, under the skilled eyes of the therapist, the child was presented two pieces of paper, one with the word “James” and one with the word “Luna,” and asked to pick the name he preferred. When the appointment only included his mother, James selected Luna, the name and gender he uses at his mother’s home and in his first-grade classroom. When the appointment was only with his father, however, James pointed to the boy name James, not the girl name.

This is just my amateur armchair therapist analysis, but I suspect mom has some sort of political Munchhausen By Proxy going on.  Whether is it an actual mental illness or just fame seeking, I’m not sure.  But it seems to me that mom is probably using and abusing her son so that she can be seen as the ultimate LGBT ally, affirming her trans child’s transition.

I remember reading about another trans-child case, under similar conditions.  The boy was expressing desire to be a girl.  When concerned people dug deeper, it turns out that the boy’s parents has just divorced and mom was saying a lot of the bitter divorcee “all men are bastards” type things around her son, and he as an impressionable young child, thought that if he became a girl, mommy would love him again.

Back to James, or more specifically James’ dad.

When James is away from his mother, he consistently rejects the idea that he is “Luna girl” or that he wants to be a girl. Because the court prohibits dad from dressing James as a boy or from teaching him that he is a boy by sharing religious or science-based teachings on sexuality, dad presents James with male and female clothing options and James always chooses, even insists on, his boy clothes. Dad told me, “James violently refuses to wear girl’s clothes at my home.” This is not a sign of gender dysphoria.

The courts have enjoined James’ dad from talking to his son about his sexuality or gender, giving him boy clothes, or even cutting James’ hair.

They have stopped the dad from being a dad.

Where this turns into a true horror story is that mom is pushing for James to be subject to puberty blockers at age 8.  He’s six now.

That right there is the breaking point.

I, for the most part, don’t care what an adult man wants to do to his body, as long as I am not forced to pay for it.  If an adult wants to transition, fine.  It’s not my business unless he starts scaring my wife in the ladies room.

A child is something very different.  Applying puberty blockers to an 8 year old is some Josef Mengele level medical evil.

It is putting radical Progressive ideology over the heath and mental safety of a child.

The day a judge tells me I cannot stop a doctor and a radical activist “gender counselor” from putting a needle in my son’s arm to fill his body with organ destroying poison is the day I fill people with bullets, take my son across the border, buy plane tickets to Ben Gurion airport, can claim asylum in Israel.

Now I know my wife, and she would never do that to our children.

What I fear is the activists who will.  The Twilight Zone future that I hope we are not headed to, but I think we might be, is when a story like James’ isn’t that of a poor boy caught between parents in a divorce, but an activist teacher or school counselor versus parents.

If there is a hill I am going to die on, it is stopping unhinged Lefties from performing Auschwitz level medical grotesqueries on my child.

11 thoughts on “I found my breaking point in Texas”