If you want to understand why J. Kb. got heartburn and high blood pressure…

If you read his post about the Israel Dismissal debate, you can tell he was running blood pressure about 20 mmHg higher that is recommended. I watched the debate too, but I am on medication so I have the advantage.

But we both believe in te old saying “Misery loves company” so here is the link to the Florida Senate video of the debate so you can enjoy it with a bottle of your favorite hard liquor.

If you want an example of how convoluted and distorted the Democrats went to cover and try to toe the line imposed by Broward County Political Machine, I urge to to watch from 1:45:15 till 1:48:07 and try not to lose composure as Senator Audrey Gibson (Minority Leader) comes up with th weirdest interpretation of what happened at Parkland while ignoring every school shooter protocol established since Columbine. You see, according to her, the BSO deputies were establishing a perimeter so the Coral spring officers could go in. They were not cowards or badly trained or nothing like that, they were in a support position!

And the intervention of Senator Book, mentioned by Hunter Pollack in the tweet that J. Kb. shared, can be seen starting at 2:34:21. The intro is beautiful, she sort of hints that the removal od Israel is akin to the killing of Martin Luther King. It goes downhill after that. 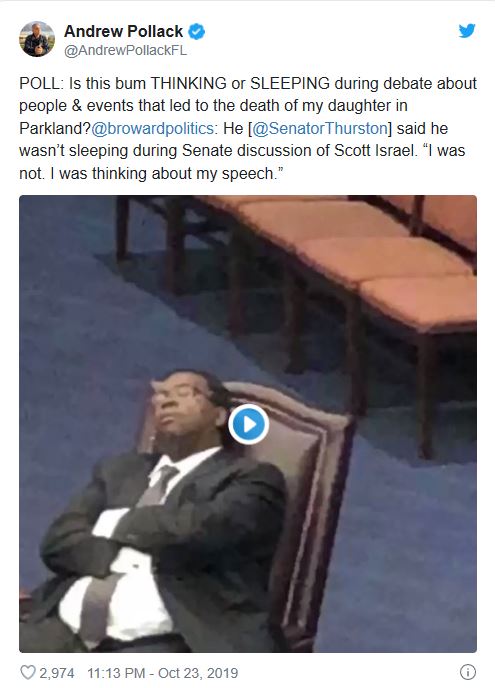 I wish I could comb the video and share with you more examples of the rampant stupidity and callousness shown yesterday, but my stomach cannot deal with that much crap.

One thought on “If you want to understand why J. Kb. got heartburn and high blood pressure…”