Two children have died after being detained by Border Patrol.

The Democrats are poised to try and make this into political hay as soon as they get sworn in, in 2019.

Senator Dianne Feinstein has already announced her intent to hold hearings over this:

Read my letter calling for a hearing on the deaths of two young children in Border Patrol custody this month. We must know more about the care and treatment of these children. pic.twitter.com/oPHuOEkM9D

The letter she Tweeted: 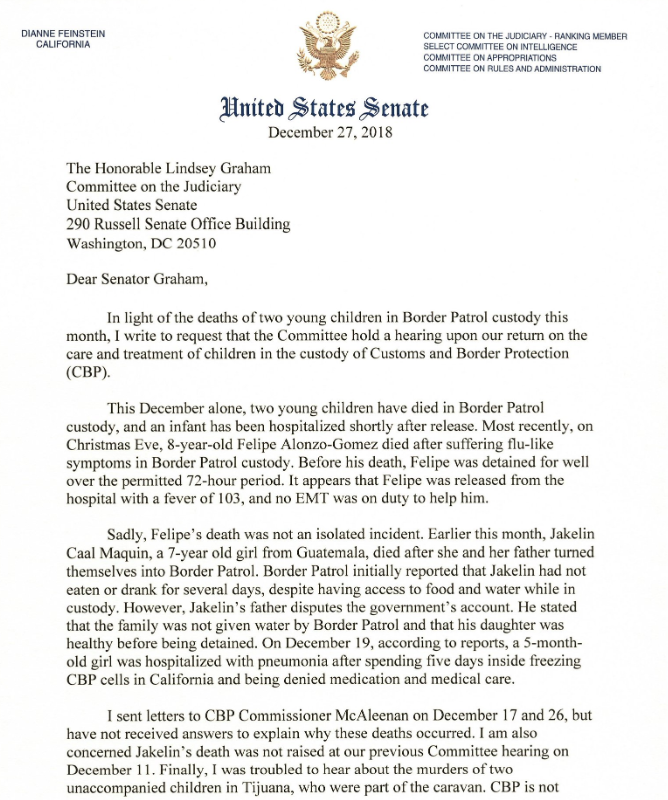 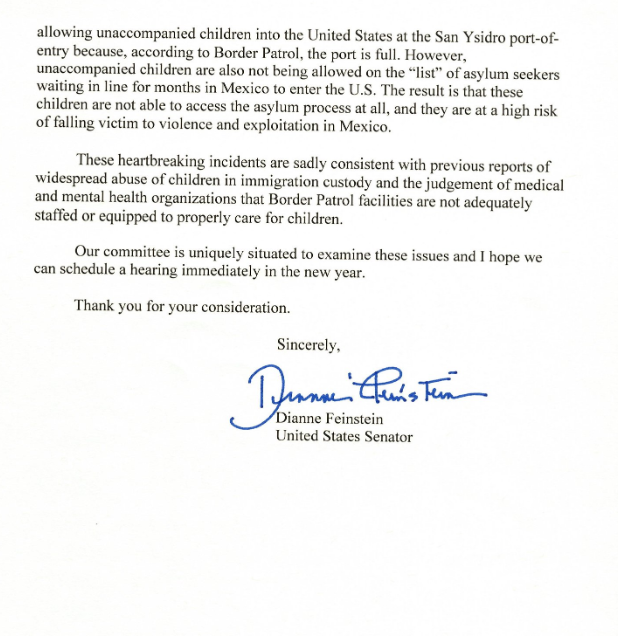 I think, or at least I hope, this is one of those issues where the Democrats’ heads are so far up their own asses they can’t see how the rest of the nation might see the issue and it causes a backlash.  Call that situation the Kavanaugh Effect.

The Left has already turned the first child that died, Jakelin Caal Maquin, into a martyr and a hashtag, #Jakeliln.  The accusation is that her death is the ultimate example of how racist and cruel America, and the Trump Administration in particular, is.

The facts aren’t exactly bearing that out.  Once again, I’m turning to a non-US news outlet, The Guardian, for the best reporting on US news.

Why did a little Guatemalan girl die after crossing the US border?

After a final stretch on foot along a dirt road through high desert, a father and his young daughter crossed into the United States at the end of a 2,000-mile journey through Mexico.

It was after dark and they were part of a group of 163 people, apparently including dozens of unaccompanied children, who had made it to Antelope Wells, New Mexico, considered the most remote spot along America’s entire southern border.

Just over 27 hours later, despite desperate efforts to save her, seven-year-old Jakelin Amei Rosmery Caal Maquin was dead.

According to the DHS , her death followed days of traveling through the desert without enough food or water. A Washington Post report said the border patrol agency cited statements from her father.

So she traveled through Mexico for days, to suffer from dehydration and a lack of care, but she dies of exposure after one day inside our borders and it’s our fault?

The situation with the second child to die is similar, but his cause of death seems to have been influenza.

Both of these children died of conditions that took days or weeks to manifest, and cannot be cured in short periods of time.

Severe dehydration causes brain damage, it works like oxygen deprivation (which is it since water is what your body uses to turn Oxygen into energy).  If you dehydrate someone enough to cause the brain damage, then you give them water, they will still die.  Once the damage is done, it’s done.

The Democrats are effectively taking a stand that says “any migrant can me mortally wounded in another country, but if they die in the US, regardless of how little time they were in the US, it is our fault.”

I don’t think that is going to fly with Middle America.

“Well Mr. John Q. Public, if a gang member shoots someone, and they run onto your property before they die, we are going to charge you with the murder.”

Another aspect to this that has annoyed me for some time, that I am waiting for the backfire on is the icebox.

The media has been repeatably using the word “icebox” to describe the ICE detention centers.  This comes from the word the migrants use for the centers, “hielera” which translates to “icebox.”  They are often described as “freezing cold.”

Clearly the language intends to convey something torturous.

I have found two news sites that have actually given the temperatures inside the detention centers.

This is from the Chicago Tribune:

The agency says temperature settings are never used for punitive purposes and thermostats are checked regularly to ensure they are between 66 and 80 degrees, the range that CBP deemed reasonable under the terms of the Flores settlement.

Last year, the agency designated a Flores juvenile coordinator to ensure compliance with the court agreement. While conducting unannounced inspections of detention facilities, the coordinator carries a thermometer and records the readings in his reports.

The inspector, Henry Moak, wrote in a June report provided to Gee that during his visits to eight detention facilities, he found only one instance of a temperature setting below the established range.

In most facilities Moak measured, the temperature ranged between 70 and 75 degrees. But in interviews with 38 detainees, many also told Moak they were cold, including one 4-year-old boy from Guatemala. Moak noted that the temperature in the cell was 76.4 degrees, but the boy’s father told him they had not received a blanket or mat after four hours in custody.

It’s winter so 70 degrees is what my thermostat is set to right now to get the heat to kick on.  In the summer, I set it at 72 so that my AC bill isn’t unbearable.

This is the title of a Mother Jones article:

Why Are Immigration Detention Facilities So Cold?
There’s a reason Spanish-speaking detainees call them “hieleras.”

But why are CBP facilities so freezing? The answer is elusive.  That’s partly because CBP refuses to acknowledge that its detention facilities are consistently cold. Rather, the agency says that cells are kept at about 70 degrees, and it denies that its agents use the term “hielera.”

But Mother Jones can’t find a single detention center that is colder than that, only anecdotal evidence from migrants who said their cells were cold.

The thing is, both the Chicago Tribune and Mother Jones report on exactly what the problem is:

Customs and Border Protection officials vigorously dispute allegations of mistreatment. Many of the migrants in custody are from rural parts of Central America, they note, and simply not accustomed to air conditioning, or what some Border Patrol officials refer to as “refrigerated air.”

We have heard those reports before, and you have to understand, when these folks come in from the desert, they’re hot,” a spokesman with CBP’s Rio Grande Valley sector told me. “They’re sweating…We’re not going to adjust the temperature for a each new group. It would work the system too hard.” He added that keeping the facility at 70 degrees helps control the spread of bacteria.

It also keeps American law enforcement officers who are in uniforms and body armor from dropping dead of heat stroke.

Guatemala is at 15 degrees north latitude, inside the Tropic of Cancer.  Anybody who came across the border on foot spent between days and months in the desert of northern Mexico where sustained temperatures above 104F are normal.

It’s a running joke that South Floridians put on parkas when the winter comes and hits 60 degrees.

When people who have lived all their lives in a climate where the dead of winter is 75 degrees and the average temperature is north of 90 degrees hit 70 degree A/C, sure, they will feel cold.

But the average temperature of an American living room in a house with central air is not a human rights violation or a torture chamber.

The media and the Democrats are trying to say that it is.

Once that clicks with Middle America, I don’t think the Democrats will find many of them (Middle Americans) on their side.

The Left is trying to paint a picture that America is torturing and starving innocent brown children to death because we are heartless and evil.

The reality is that children are being starved, dehydrated, neglected, abused, and raped early to death by smugglers south of the border, only to die in an air conditioned building, under the care of medical processionals because they were too far gone before they got here.

I think, or at least I hope, that these hearings will make most Americans realize the latter and not buy the former.