It was a trap and this CEO fell for it

A CEO’s assertion that a dress-wearing male teen looked like an “idiot” prior to prom has caused his ouster from his Tennessee job.

Sam Dalton is now the former head of telemedicine company VisuWell, thanks to a viral video of his interactions with Franklin High School senior Dalton Stevens.

The businessman countered by saying the video doesn’t capture the impetus for his approaching the teens.

“[This was] about obnoxious, loud behavior by this group of teens,” he told Newsweek Tuesday. “[My party] had just sat down for dinner at this restaurant that we frequent, and I was returning from the restroom when I was presented with their loud cursing. Making it about the dress was their idea and they edited out most of the exchange.”

Mr. Dalton added that he harbors “no ill will towards anyone or their personal choices, so long as it does not harm me or my family.”

Here is the video that was posted online:

Here is a prom picture of the boy in the dress. 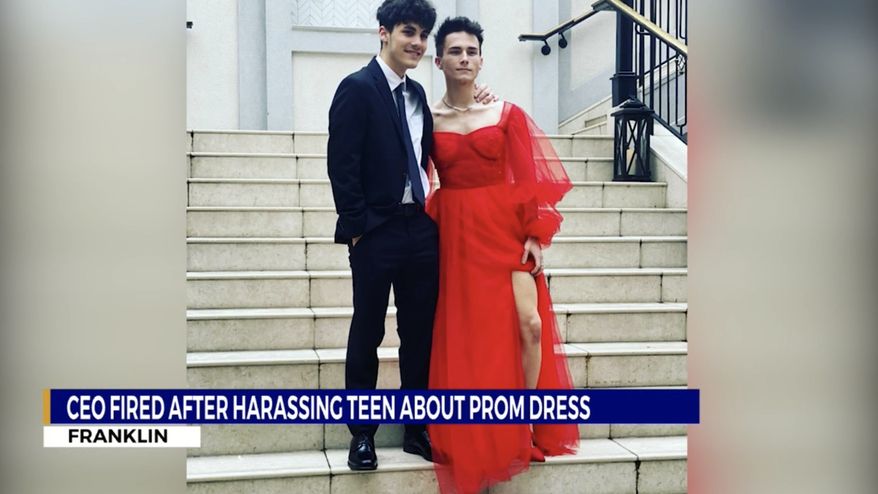 I feel bad for this CEO, he didn’t realize he fell for a trap.

This is how the woke mob operates.  This is how they collect scalps.  It is cry-bullying.  They play the victim all over social media to take someone else down.

It is how they exert their power.

Back when I was in high school 20 years ago, schools had rules about what kids could wear to prom.  Then the LGBT brigade made a boy wearing a dress or a girl wearing a tux a thing and so those sorts of traditionalist dress codes were done away with in the name of progressivism.  Those weren’t the only limitations.  Trust me, if I could have worn a powder blue, ruffle front tux I would have.

This boy picked the ugliest, looks like a cheap hooker, dress he could find in the hope that he would bait a normie into saying something that he could use to get them canceled.

When he wasn’t getting enough attention, they started acting in a way that would guarantee attention.  Probably hoping that the hotel would kick them out, so they could turn around and say “the hotel kicked an LGBT prom couple out because they are [insert identity] phobic.”

The hotel wasn’t dumb enough to fall for it but this CEO was.  And he lost.

If you see something like this where you live, just leave.  Get up, walk away, and leave.  Some woke LGBT cry-bullies are baiting you.

If you see a humongous land-whale in an impossibly tiny street-walking hooker dress, it’s the same thing.  That’s a fat feminist baiting you into finding her unattractive and giving her a look that will allow her to go all fat pride in your face.

If you see something that looks out of sorts, just walk away without attracting any attention to yourself, it’s a trap.

The best advice I can give you when it comes to Wokenistias is straight from Prince Humperdink:

I always think everything could be a trap, which is why I’m still alive.