Kavanaugh causing the suicide of the American University

In the last couple of weeks I have covered how Yale and Harvard are destroying their reputations over Judge Brett Kavanaugh.

The law schools and law students associated with both of these schools have abandoned reason and the principles of American justice to come out against a man because they disagree with him politically.

This insanity has metastasized across the University system in America.

A couple of days ago, a Georgetown professor named Christine Fair let loose on Twitter with this garbage. 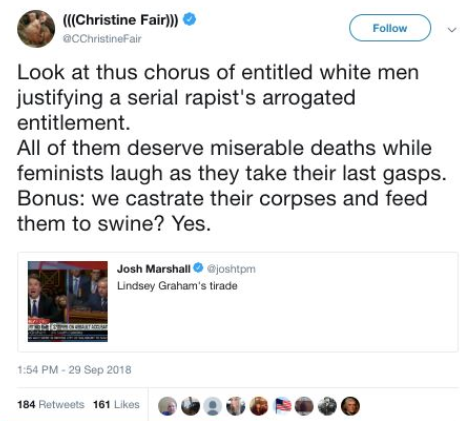 Georgetown is standing by Fair, but over at the Catholic University of America, a dean was suspended for questioning the validity of Julie Swetnick’s obscene and egregious allegations.

Call for the murder and mutilation of Republicans is fine, but be skeptical of a allegation against a Republican that is ridiculous on its face and be punished.

A group of more than 1000 law school professors signed a letter sent to the New York Times as to why Kavanaugh should not be seated on the Supreme Court.

The Senate Should Not Confirm Kavanaugh

Judicial temperament is one of the most important qualities of a judge. As the Congressional Research Service explains, a judge requires “a personality that is even-handed, unbiased, impartial, courteous yet firm, and dedicated to a process, not a result.” The concern for judicial temperament dates back to our founding; in Federalist 78, titled “Judges as Guardians of the Constitution,” Alexander Hamilton expressed the need for “the integrity and moderation of the judiciary.”

We are law professors who teach, research and write about the judicial institutions of this country. Many of us appear in state and federal court, and our work means that we will continue to do so, including before the United States Supreme Court. We regret that we feel compelled to write to you, our Senators, to provide our views that at the Senate hearings on Sept. 27, Judge Brett Kavanaugh displayed a lack of judicial temperament that would be disqualifying for any court, and certainly for elevation to the highest court of this land.

The question at issue was of course painful for anyone. But Judge Kavanaugh exhibited a lack of commitment to judicious inquiry. Instead of being open to the necessary search for accuracy, Judge Kavanaugh was repeatedly aggressive with questioners. Even in his prepared remarks, Judge Kavanaugh described the hearing as partisan, referring to it as “a calculated and orchestrated political hit,” rather than acknowledging the need for the Senate, faced with new information, to try to understand what had transpired. Instead of trying to sort out with reason and care the allegations that were raised, Judge Kavanaugh responded in an intemperate, inflammatory and partial manner, as he interrupted and, at times, was discourteous to senators.

As you know, under two statutes governing bias and recusal, judges must step aside if they are at risk of being perceived as or of being unfair. As Congress has previously put it, a judge or justice “shall disqualify himself in any proceeding in which his impartiality might reasonably be questioned.” These statutes are part of a myriad of legal commitments to the impartiality of the judiciary, which is the cornerstone of the courts.

We have differing views about the other qualifications of Judge Kavanaugh. But we are united, as professors of law and scholars of judicial institutions, in believing that he did not display the impartiality and judicial temperament requisite to sit on the highest court of our land.

This is a partisan political hit.  This is bullshit of the highest order.

There has to be some sort of name for this type of philosophical trap.

Senate Dems: “You are unfit to be a Judge because of a ridiculous and baseless accusation in which you are claimed to be the ringleader of a group that drugged and gang raped girls in high school, presented by an attorney who openly hates the President that nominated you and wants to run against him in the next election cycle.”

Kavanaugh: “Fuck you, that’s not true, that accusation is partisan horse shit.”

This is a Democrat talking point and these law school professors have signed their name to it.  They are the ones putting partisanship over everything including basic human decency.  But the narrative is always whatever the GOP is doing is party over country and whatever the Dems are doing is in the best interest of the nation, no matter how often that is proven to be untrue.

Lastly we turn to the University of Southern Maine.

A public university has pulled an offer for one college credit for students who travel to Washington to protest Republican Sen. U.S. Susan Collins as she considers Supreme Court nominee Brett Kavanaugh.

University of Southern Maine President Glenn Cummings said Wednesday the “pop-up course” was hastily arranged without his or the provost’s knowledge.

Maine GOP shared a Wednesday email in which a university employee says students could receive college credit for bussing to Washington, D.C., to demonstrate. The email links to an online form asking students if they’re willing to be arrested.

Cummings said the university immediately pulled the credit offering and said no university money will go to the trip, set for Wednesday night. Maine GOP spokeswoman Nina McLaughlin demanded to know which outside group organized the “liberal sham.”

The Maine Republican Part sent out this information about the event. 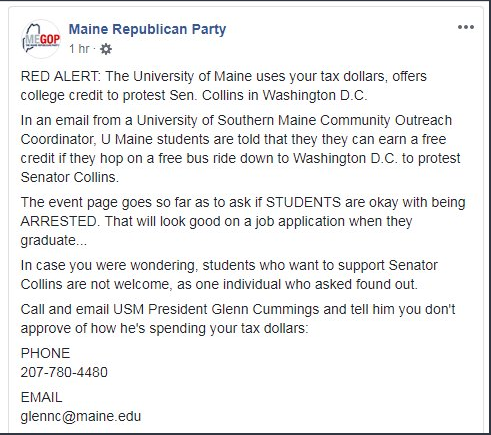 Good for the school president for shutting this down, but did he do it only because of public backlash and what about the professors that arranged this nonsense?

This is clearly hyper partisan activity that would have been subsidized by state and Federal tax dollars.  Tuition at USM is $271 per undergrad credit hour plus transportation costs.

That professors thought they could do this is extremely telling.  People should be fired over this, but I have a feeling they won’t be.

It’s like colleges looked at what happened at Mizzou and Evergreen State and how those schools became a national embarrassment and enrollment dropped and students who graduated couldn’t find jobs because the reputation of the school was tarnished and they sad “we want that here.”

The American college system is committing suicide over Brett Kavanaugh, showing us just how inside the Progressive bubble they are.

As a parent, I’m scared for my children’s’ future.  I want them to get a good education they need for a good job, but when happens when every place in America becomes a partisan reeducation camp that teaches them nothing but intersectional politics?

It is a terrifying thought.

5 thoughts on “Kavanaugh causing the suicide of the American University”