I had to get rid of the old charcoal grill I had. It was too big, turned out to be a cheap POS that was coming apart and occupied too much space in my small back porch.  Besides, now that is two of us, we don’t need a big cooking area to grill our favorite stuff.

I had been looking at what they call “table top” grills and ended up with the Char-Griller Side Fire Box 22424. Small enough to use little real state and looked tougher than the other tin POS I had so we got it.  It is well built, thicker steel and…heavy.  Dear God my back did not like that.

Much to my chagrin I realized I needed to add wheels so I racked my brains for a couple of weeks till I hit a solution: A service cart! Most were too big and expensive till I bumped into one in Amazon that was not only perfect but you would swear it was built for the grill it fits so good and it was cheap (Paid $27.14): 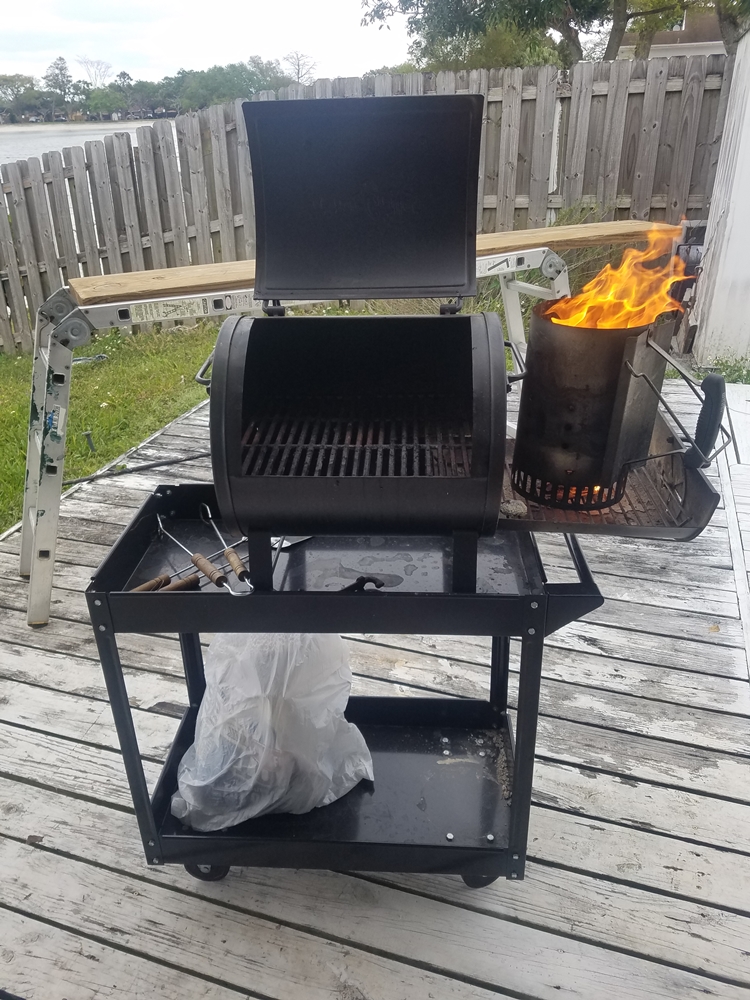 It was an added bonus when I realized i could keep all the grilling stuff together in one neat package, roll it around easily and still using less space than the previous grill.  Even with the bag of charcoal,  the chimney starter and fluid, the set up is obviously top heavy but not too much. I just drive it around carefully and even the nasty winds we’ve been having have been able to tip it.

Speaking of wind, it is a certified biatch to light up charcoal with 15 mph winds and gusting to 25.  I looked into what to use to start the charcoals and found all kinds of crap from expensive small rolls of dried grass stamped with the ecological label to what amounted to cups sawdust and paraffin or cubes of paraffin and some sort f absorbent, flammable material. Now, I have some household paraffin (non-toxic used for canning) and at the time several small Amazon boxes, so I got busy and came out with this .

Strips of box cardboard about 2.5″ x 1″ dipped in paraffin. I tried to get fancy by adding a wick, but it was a total failure.  What I did was to cut the cardboard like you see in the photo and let it be its own wick. They work great!  So just go ahead, cut a bunch of cardboard, dip it in the molten paraffin (use long tweezers if you have them or needle nose pliers) and once coated well, drop them on aluminum foil.   once they cool off, you just need to fold the foil and you are ready for the next grilling event. The good news is that even with winds, they will stay lit which is also the bad news because they are light enough to be blown away while on fire. Don’t ask. So light them up and toss them quick under the charcoal chimney.

I will probably do some adjustments, but I am pretty happy with this system.

8 thoughts on “Lazy Grill Set up”