"Concealed Carry Reciprocity" would force every state to accept other states' concealed carry standards, even states that have weaker standards, or, worse, no standards at all. #StopCCR pic.twitter.com/Eq0a3tzm4Z

As Trump would say:

Here is the list of “Acceptable Firearms Training Documentation” required for a Florida CCW:

To qualify for a concealed weapon license, Florida law requires you to submit proof of competency with a firearm. A copy of a Certificate of Completion or similar document from any of the following courses or classes is acceptable:

Miguel turned me on to the FL CCW requirements in the application.  Particularly this section:

The training documentation I submitted for my FL CCW is the certificate from the Florida Hunter’s Safety Course that I took at Boy Scout summer camp, which was the classroom instruction that we sat through in order to use the camp’s rife range.

Going to the Florida Fish and Wildlife Conservation Commission website there are a number of ways to earn a Hunter Safety certificate.  The include everything from a Traditional Courses and Skills Day to a Florida Virtual School Outdoor Education Course, but all require some sort of shoot.

Here is where things get more complicated.  The Boy Scouts, Girl Scouts, and 4-H are all approved instructors under the right conditions.

So when I went to Boy Scout camp and got my riflery and shotgun merit badges, all of us Scouts had to sit through the hunter safety course from a Florida Wildlife officer before we could touch a gun, I got my certificate it was because shooting was part of the merit badge requirements.

Florida only specifies “you to submit proof of competency with a firearm” which they define very loosely.  So loosely that shooting a single shot 22 at Scout camp when I was a teenager got me a CCW at 21.

This is why I said that FL didn’t have a live fire requirement.  I didn’t connect my BSA merit badge to my CCW, and since the minimum age to complete the FL hunter safety course is 12 and there is no date on the certificate (not on mine) it seems that shooting a 22 at 4-H camp at 12 is “proof of competency with a firearm” nine years later.

To pass the range qualification portion of your Illinois Concealed Carry License Training, you must hit the silhouette target in the black area, at least 21 out of 30 shoots fired, or a score of at least 70%.  That’s anywhere in the silhouette, not a scoring ring, just in the target.

Nebraska mandates drawing from  concealment.  Both states require it be a handgun.  The intention being that the CCW applicant be able to use the gun he or she intends to carry with some level of competency at the time they are applying for their permit.

Florida is like “Fuck it, did you shoot a rimfire rifle at Scout camp before you were old enough to get your learner’s permit?  That’s good enough for us for a CCW.”

You don’t actually have to prove you have any competency with the handgun you intend to carry.

This actually makes the later part of this post even more relevant.

Now back to the rest of the original post:

Of all the documentations that you can send in, this his one is my favorite:

Other Acceptable Forms of Training Documentation

Documentary evidence of experience with a firearm obtained through participation in an organized shooting competition is also acceptable.

This means that, at least in theory, you can submit documentation of your classification from IDPA or USPSA as proof of competency.

So MDA got their facts wrong on the level of training Florida requires.

Then they bring Alabama (and Georgia and Mississippi) into the mix.

This is the problem with people with a statist mentality.  They think like bureaucrats.  Everything must be quantifiable and acceptable by a government employee behind a desk with no real world knowledge or experience.

Just about everyone I know who has a CCW is a regular shooter of sorts, but this is not something that a desk jockey bureaucrat can quantify.  All the target shooting you do at the range counts for nothing because someone with the approval of government didn’t sign a pre-formatted piece of paper.

A course I took at Boy Scout camp when I was 16 demonstrated my “competency with a fire” enough for my my CCW when I was 21 because of the fairy dust of bureaucratic approval.

This is the kind of bureaucracy vs. reality that inspired Kafka to write.

This is the firearms qualification for FL law enforcement. 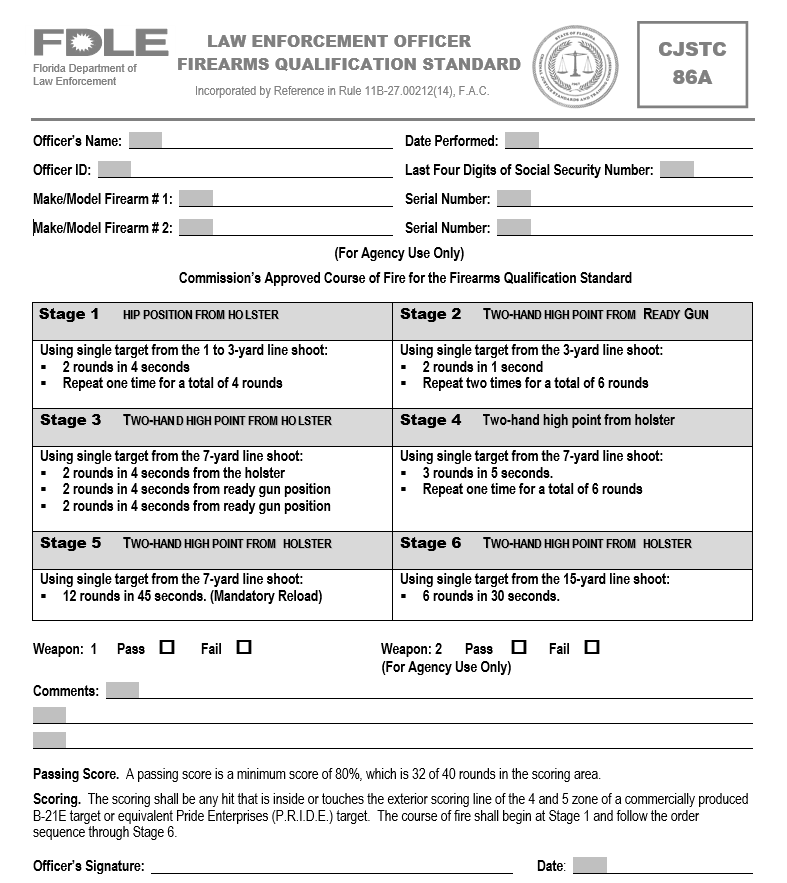 That’s not a difficult challenge by any standard, 80% on a man size B-21 target at 7 yards.  But it’s been approved by goverment so a police officer who shoots this once a year is a expert.

This is Travis Tomasie, captain of Team Remington formerly of Team PARA.

He is a USPSA Grand Master and National Champion.  He’s also an Alabama resident and a hell of a nice guy.

He hasn’t taken the FL training class so by MDA standards is totally unfit and too dangerous to carry concealed in Florida.

It’s not that they know anything about guns or shooters.  It’s that they think like statist bureaucrats, and anything that hasn’t been approved by a committee can’t be trusted or considered.

Instead, MDA is saying that Alabama’s non existent training requirements are a danger but Florida’s “one summer at Scout camp with a 22 rifle” is less dangerous because it has the approval of a bunch of bureaucrats.

I will stick to my guns about this point.  There are many experienced shooters that are far better and more knowledgeable than the minimum requirements of any state CCW.  It is typical bureaucratic thinking to assume everyone will only achieve the minimum set standard.  Without the blessing of a bureaucrat you are just dangerous garbage.

Consider that while you think about this:

Kellogg’s had to recall Honey Smacks because of salmonella.

When was the last time you heard of anybody getting salmonella from a a couple of kids who set up an illegal, unlicensed lemonade stand?