For two years now, we have watched as the losers of the 2016 election have spent every possible breath and drop of ink denouncing the Electoral College and the Senate.

The checks and balanced built into our system of government checked them, so reflexively, they hate it.  We country bumpkins have too much power and it should be taken away from us and put in the hands of a dozen big cities.

Of course, our founders created the bicameral legislature and Electoral College to empower the smaller states and more rural populations from getting dominated by the cities.  They understood, even in the 1780’s, that without some sort of check in place, urban centers would dominate politics and that would be bad for rural farmers.

But to hell with the system because it kept Hillary out of a seat she was entitled to.

They have pulled out every dirty trick to try and stop him.  This last ditch effort to destroy him with an allegation from high school is the worst yet.

Forget that I support Kavanaugh’s judicial oppinions.  Forget that I want him on SCOTUS because I’d love to get a decision that protects assault rifles and CCW.  Let’s address some basic facts:

So the question is: do we destroy the career and professional life of a man, based on a 36 year old accusation, without a conviction or even evidence of a crime?

What kind of precedent does that set?  A terrible one.  Baring any new evidence, if this is used to destroy Kavanaugh, that should scare the shit out of every man in America.

You may have your entire life and reputation destroyed by a single, unprovable, unverifiable, accusation dating back to adolescence.

While society is more flexible than the law, we still take guidance from the law.

Innocent until proven guilty is still a principle that many Americans hold dear.  It must be destroyed.

So how do you prove guilt when there is no evidence?  Social Justice and Kafkatrapping.

We don’t need evidence to prove guilt beyond a reasonable doubt.  Social Justice demands that we believe the woman because she is a woman.

Our judicial system was based on the idea of Blackstone’s formulation:

“It is better that ten guilty persons escape than that one innocent suffer.”

Forget that now.  Let all the innocent men suffer if means that we never question the accusation of a woman.

As for the “nothing to gain” part.  Have we not seen the actions of the #Resistance over the last two years.  What she has to gain is beatified hero status for taking out Kavanaugh. 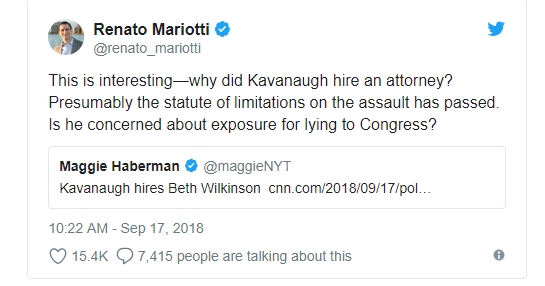 This man is a fucking lawyer.  He is a CNN legal analyst and prosecutor.

Under no circumstances should hiring a lawyer or seeing counsel be construed as evidence of guilt.  Our right to counsel is enshrined in the Bill of Rights.

CNN is now saying “only guilty people want lawyers.”  Our Founders put that to bed in 1789.  To go down that path is the ultimate Kafkatrap.

In their effort to take out Kavanagh, they are nuking our entire Judicial system.

The oppressed victim status of the accuser is more credible than evidence.  Providing character witnesses is evidence guilt.  Hiring a lawyer is proof of guilt.

Justice cannot withstand this kind of assault.  This is going to turn is into a Banana Republic where people will be destroyed in court for political expedience.

This is what is on the line with Kavanaugh’s confirmation.

6 thoughts on “More Kafkatrapping of Kavanaugh”