I posted this before and I was right to. 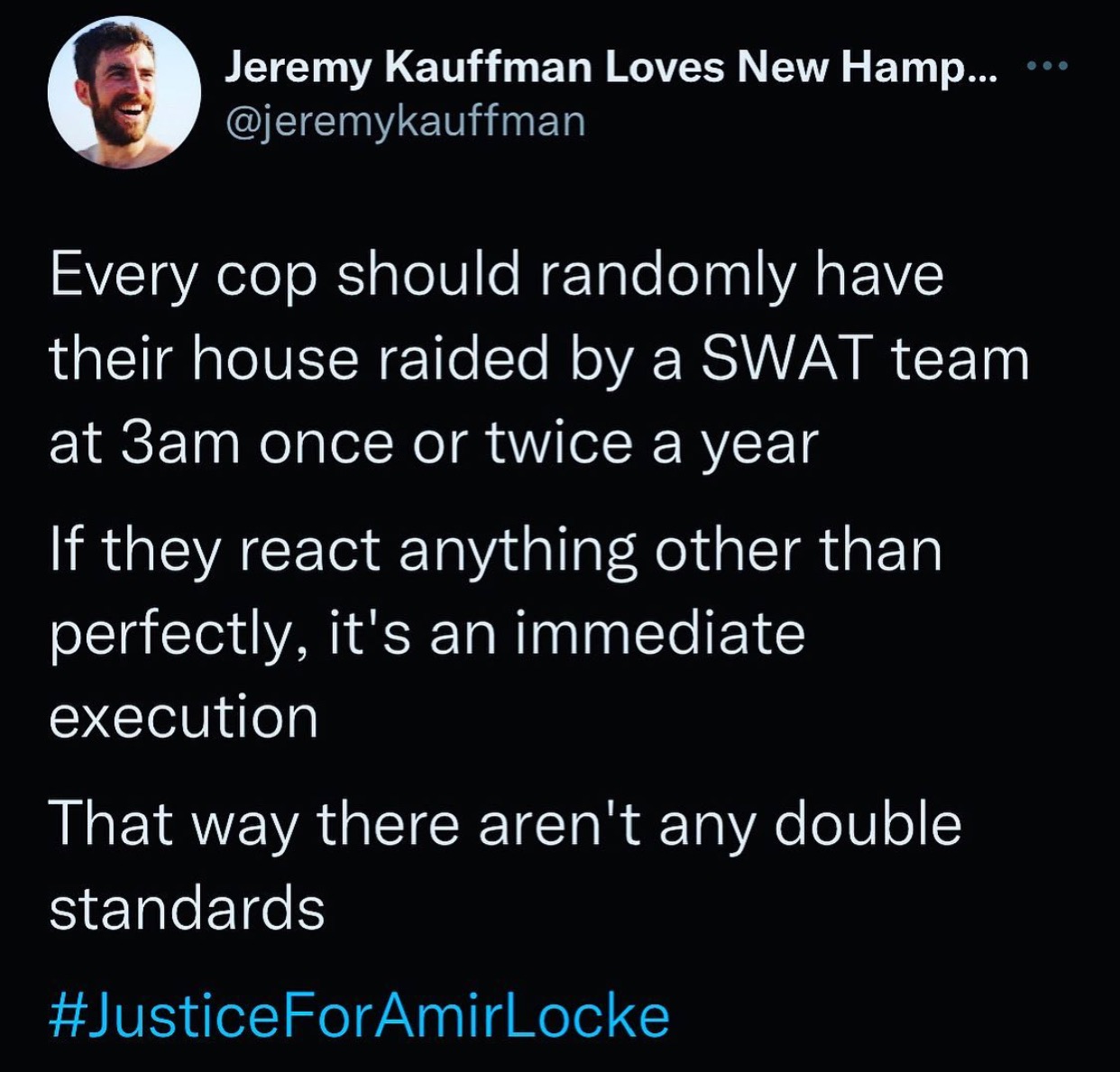 Well here is a blood boiling story out of Florida that makes me double and triple down on it.

Pensacola Police says its SWAT team attempted to serve a search warrant at a home when Marioneaux Jr. fired a shot at an officer. The bullet hit the officer’s shield.

“If that shield hadn’t been there, that officer would have been struck in the head,” Mike Wood with Pensacola Police said.

No one was hurt. Marioneaux Jr. eventually surrendered and was taken into custody.

But there is more.

The incident happened around 5 a.m. in the 2500-block of N 7th Ave. as Pensacola Police SWAT were executing a search warrant.

According to the arrest report obtained Friday, an officer “knocked on the front door numerous times while also announcing loudly, ‘Pensacola Police, search warrant!'” The officer continued to do this for approximately 10 seconds.

The report states after receiving no response, the officer struck the door with his door ram.

According to the report, upon breaking down the door, Marioneaux Jr. fired a gun at the officer — striking his shield — before the officer fired back.

The report states Marioneaux Jr. then complied to demands to drop his weapon and was taken into custody. No one was injured.

The report adds police interviewed multiple neighbors who all said they heard “officers announcing themselves” while inside their homes. Channel 3 spoke to a neighbor on Friday who said she woke up to gunshots, but never heard police.

Oh but the shit show continues.

Pensacola Police said Monday the search warrant last week that resulted in an officer-involved shooting was in relation to a shooting near downtown Pensacola in January.

“Due to the high risk nature of the incident, SWAT was utilized to serve the search warrant. Members of SWAT knocked and announced their presence and waited approximately 15 seconds before opening the residence’s door,” Pensacola Police said in an updated release on Monday.

Channel 3 reported Friday that according to the Pensacola Police arrest report, SWAT officers reported they knocked and announced their presence for “approximately 10 seconds” before ramming the door and entering the home.

Channel 3 checked the department’s policy, which states, “generally, members must wait at least 15 seconds after the onset of knocking and announcing before forcibly entering.”

Police told Channel 3 Friday afternoon that it does not have video of the shooting. The department said this was because its SWAT team doesn’t wear body cameras for fear of divulging tactics.

But Monday, they said that’s not the case. Instead, the department says it spent the past seven years prioritizing patrol officers when assigning body cameras. Chief Eric Randall eventually wants SWAT officers to be next.

If you’re not mad yet, this will really do it.

Marioneaux Jr.’s two young children — ages 1 and 3 — were inside the home at the time. The family argues Marioneaux Jr. shot at the officers because he feared they were intruders.

At 5 a.m. last Thursday, the children — Caion and Cylen — were asleep with their dad at the N 7th Ave. home. Dixon says she was asleep at her own home.

Receiving the alarming phone call, family told her what they knew. Among the info relayed was that her 1-year-old was injured.

“I get out my car like, ‘Where’s my baby? Where’s my baby?'” Dixon said. “And I get my baby and I see his face — and it’s almost unrecognizable compared to how he looked when I left him last.”

A picture shows the 1-year-old’s nose and lip swollen, a scrape on his lip, scratches on his nose and several bumps on his forehead. Dixon’s first thought — “Who did this?”

The department claims both kids were in the backseat of a car with an investigator. The investigator got out of the car.

Escambia County tells Channel 3 that EMS was called out at 6:40 a.m. for a hemorrhage and laceration on a toddler. They arrived six minutes later.

The county couldn’t specify what EMS saw and said. But it claims the call was canceled 20 minutes later.

The toddler was not taken to the hospital by EMS — so Dixon took him herself. Dozens of pages of paperwork from the hospital document the child’s injuries after CAT scans and x-rays.

So let’s go through all of this.

Marioneaux Jr., who was not the subject of a search warrant, was asleep in his bed at 5:00 am.

He is also a licensed gun owner (CCW presumably) with no criminal record.

A SWAT team pounds on his door for 10 seconds then batters it down with a ram, and may have violated department policy in doing that.

At least one neighbor says she didn’t hear the police announce themselves.

Marioneaux Jr. wakes up thinking someone is breaking into his house, fires one round, then surrenders when he learns it’s the police.

The cops pull his two kids from their beds and drop his 1-year-old on his face.  They call EMS, which doesn’t take the baby to the hospital.

Marioneaux Jr. is charged with attempted murder of a police officer.

The SWAT team doesn’t have body cameras and the department gave some bullshit answers as to why not.

It’s a miracle nobody was killed but Marioneaux Jr’s life is ruined.  He lost his job and will have to pay huge sums for legal defense, which he may not win.

This sort of warrant execution is too risky for all parties but the cops love themselves some violence and departments love spending money on tactical training.

Police who carry these raids out, the judges who sign off on them, and the prosecutors who throw the book at people who defend themselves in these raids thinking they are victims of home invasions needs suffer harsh penalties.

This abuse needs to stop.