There’s enough money in this country to pay workers what they deserve, guarantee health care for all and stop the climate crisis.

And I know where it is. pic.twitter.com/7WLtI8bWp0

There is plenty of money to cure all of society’s ill.  It’s just in the hands of the wrong people.  If I take their money I can fix the world with it. – h Bill de Blasio

What kind of person would look at the record of history and think that will work? 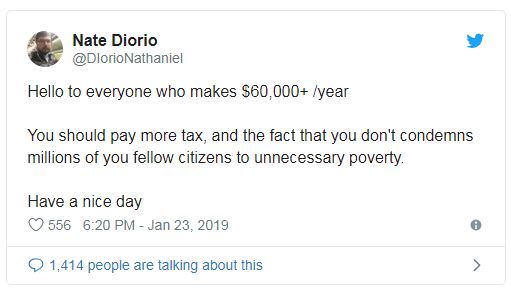 Remember what I said about dekulakization?

There will always be someone poorer than you who thinks that it’s not fair that you have more and wants to take what you have.

Congresswoman Alexandria Ocasio-Cortez promised us that she will only take 70% over $10 million.

When everyone on the right said that AOC’s tax plan would never work and the middle class would end up getting hit by it,  here comes Nate to prove them right.

By Nate’s standards I’m a kulak, and I guess he is going to support de Blasio and AOC taking most of my money too.

I wonder which Green New Deal project I’m going to be worked to death building when Nate goes to the polls.