This is an actual headline from the New York Times opinion section.

Attacks on Jews Over Israel Are a Gift to the Right

I’m going to screengrab it for you just in case. 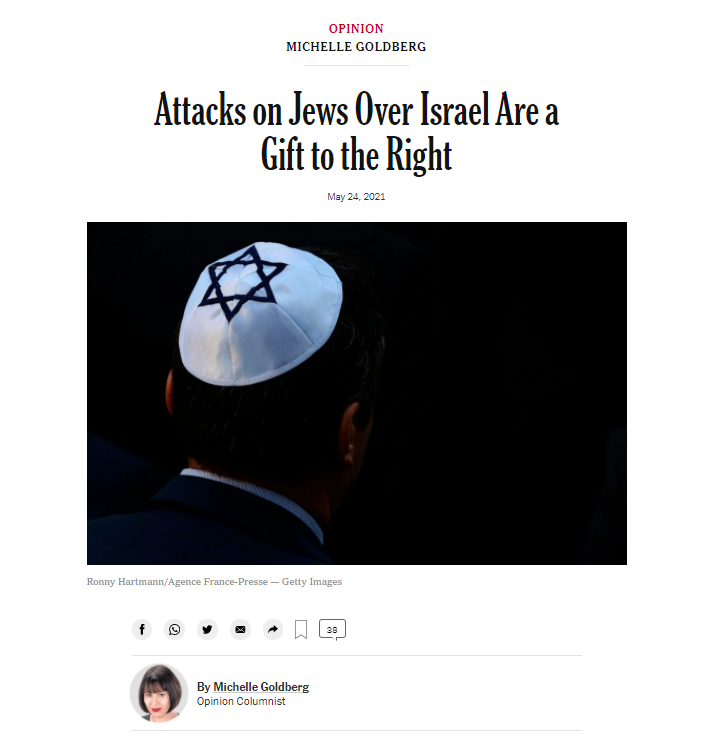 So what is in this opinion with such a disgusting bullshit title?

Violence between Jews and Muslims in the Middle East is often accompanied by spikes in anti-Semitic activity in the United States, but what’s happened over the last week or so has been different.

As Jonathan Greenblatt, the national director of the Anti-Defamation League, put it to me, Jewish organizations are somewhat inured to, say, pro-Palestinian graffiti on a synagogue following a protest. What’s new, and more reminiscent of the sort of anti-Semitic aggression common in Europe, is flagrant public assaults on Jews — sometimes in broad daylight — motivated by anti-Zionism.

These apparent hate crimes are, first and foremost, a catastrophe for Jewish people in the United States, who’ve just endured four years of spiking anti-Semitism that started around the time Republicans nominated Donald Trump in 2016. “It feels like it’s a new front opening up against the American Jewish community,” said Greenblatt.

But this violence also threatens to undermine progress that’s been made in getting American politicians to take Palestinian rights more seriously. Right-wing Zionists and anti-Semitic anti-Zionists have something fundamental in common: Both conflate the Jewish people with the Israeli state. Israel’s government and its American allies benefit when they can shut down criticism of the country as anti-Semitic.

Many progressives, particularly progressive Jews, have worked hard to break this automatic identification and to open up space in the Democratic Party to denounce Israel’s entrenched occupation and human rights abuses. This wave of anti-Semitic violence will increase the difficulty of that work. The Zionist right claims that to assail Israel is to assail all Jews. Those who terrorize Jews out of rage at Israel seem to make their point for them.

It’s awful irony, but anti-Semitic violence helps shore up this system by strengthening the taboo against calling it what it is. I get the sense that some people on the left find talking about violence by Palestinian sympathizers embarrassing; it certainly doesn’t receive the same sort of attention as white nationalist attacks. But it should be treated as a crisis, both as a matter of basic human solidarity and because it’s a political danger.

It is a core tenet of Judaism that the land of Israel belongs to the Jewish people as part of the Covenant.  The Jews agreed to be God’s chosen people and live by God’s 10 Commandments and 613 Mitzvot, and endure the suffering that being God’s chosen people endure, in exchange the land of Israel is ours and our people (the children of Abraham) will be as numerous as the stars.  To deny Israel to the Jewish people is to end the Covenant and is an attack on one of the foundational aspects of Judaism.

The Left has transitioned to “anti-Zionism” because the Left excels at playing these rhetorical games, in which they manipulate the language and obliterate the meaning of words to achieve what they want.

Remember, it’s not racist when the Left engages in explicitly anti-White acts, like the mayor of Chicago announcing that she will only talk to reporters of color because racism is “power plus prejudice” and therefore marginalized people can’t be racist because they don’t have power.  No, it’s racist.  But they play these rhetorical games to explain why their evil isn’t really evil.

They glommed onto “anti-Zionism” because they can’t admit that they are just old-fashioned anti-Semites and still have the moral high ground.  So they declare Zionism to be racism and then by being viciously anti-Semitic under the banner of anti-Zionism, they can as anti-Semitic as they want and still be the good guys.

The problem is, when the Left gets angry, they lose their self-control, and the mask slips.  They don’t ask “are you a Zionist” but “are you a Jew” before beating you up.  Their repeated chants of “Hitler was right” belies the true feelings they have.

Mr. Goldberg’s entire opinion is centered around the idea that she’s “one of the good ones” in which she’s ethnically Jewish but hates Israel and is a devout Leftist and therefore should be spared from the attacks on Jews.

My hatred for Jonathan Greenblatt and the ADL entirely comes from Greenblatt being a dyed in the wool Lefty and turning the ADL into a Leftist organization that exists to excuse Leftist anti-Semitism.

When a few hundred assholes with tiki torches chant “the Jews will not replace us” the ADL loses its shit and condemns everyone remotely on the right of being Nazis.

When thousands of Palestinians and supporters beat up Jews while saying “the Jews will not replace us” the ADL is suddenly less inclined to call that out.

What terrifies Ms. Goldberg and Mr. Greenbaltt isn’t Jews getting beaten up.  It’s Jews and others who are not dyed in the wool Leftist noticing this and seeing the seething Jew-hatred on the Left.  That “anti-Zionism not anti-Semitism” is meaningless when “anti-Zionism” takes the form of beating up anyone in a Yarmukle and throwing firebombs at businesses owned by Jews.

Being Jewish is not easy.  There is, unfortunately, a long history of Jews who decided to try to take the easy path by siding with the dominant Jew-hating political power over the Jewish people.

This is not uniquely Jewish.  The founding father Samuel Adams famously said: “If ye love wealth better than liberty, the tranquility of servitude better than the animating contest of freedom, go home from us in peace. We ask not your counsels or arms. Crouch down and lick the hands which feed you. May your chains set lightly upon you, and may posterity forget that ye were our countrymen.”

Under Nazi Germany, these Jews were Kapos.  In the Soviet Union, they were Yevsektsiya.  In America, they are NYT opinion writers.