Selena Spier, a student at Pitzer College, painted a mural of a gun with flowers coming out of the barrel.  Pitzer College is a private liberal arts college in  in Clairmont, CA.  Pitzer’s mission statement is a follows:

“Pitzer College produces engaged, socially responsible citizens of the world through an academically rigorous, interdisciplinary liberal arts education emphasizing social justice, intercultural understanding and environmental sensitivity. The meaningful participation of students, faculty and staff in college governance and academic program design is a Pitzer core value. Our community thrives within the mutually supportive framework of The Claremont Colleges, which provide an unsurpassed breadth of academic, athletic and social opportunities.”

Uh oh… They encourage Social Justice, AKA Progressive Jihadism.  That is never good.  You KNOW that something is going to happen now.  No bygones will be let to be bygones.  Somebody made a public statement about something, this case in the form of art.  Now, in the interest of Social Justice, somebody else who’s opinion doesn’t align exactly 100%, or just needs some attention, is going to engage in a Robespierrian wave of terror. 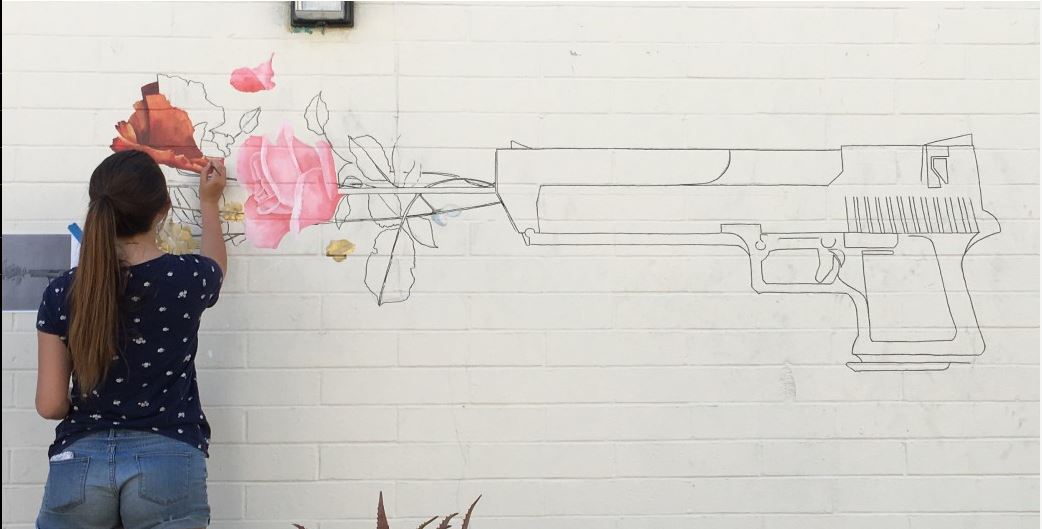 This manifested itself in one student, Gregory Ochiagha, responding to the mural with a campus wide email stating:

“It’s truly in bad taste to have a large depiction of a gun in a dorm space—especially when students of color also reside there…  My Black Mental and Emotional Health Matters. I shouldn’t be reminded every time I leave my dorm room of how easy my life can be taken away, or how many Black lives have been taken away because of police brutality. This is emotionally triggering for very obvious reasons. And if you want to belittle or invalidate by [sic] black experience, I live in Atherton, come thru, let’s have that idiotic conversation.”

OK.  I’m going to have this idiotic conversation.  By “Atherton” I assume Mr. Ochiagha means Atherton, California.  A city of about 7,000 people, it is listed by Forbes as having the No.2 most expensive zip code in the country with a median home price in excess of $4 Million.  It sounds like Mr. Ochiagha grew up in the ghetto.  I can’t imagine all the police brutality he must have faced from the town’s 21 police officers.  Mr. Ochiagha is lucky to have gotten out of Atherton alive.  His experiences must have earned him some sort of hardship scholarship to attend a $63,880/year college.

I know, it terrible of me to belittle his black experience.  It’s just that when one dives deeper into an understanding of police brutality and police shootings, you find out that wealth, education, and class are  better predictors of a violent encounter than race.  Statistically speaking, a young black man living in the second most expensive zip code in the country, attending am elite private college is unlikely to face much in the way of abuse by police.

Given the way he phrased his statement “I shouldn’t be reminded every time I leave my dorm room of how easy my life can be taken away, or how many Black lives have been taken away because of police brutality.”  It sounds like he himself has never experienced police brutality.  He is being triggered by proxy because of violence other people, he has never met, have been the victims of.

That’s a lot like saying you have PTSD from the War in Iraq, not because you were deployed, but because you marathon watched Generation Kill on HBO GO.

Of course he’s going to get what he wants. “Spier plans to modify her mural. ‘I spoke with Gregory earlier and we agreed on a modification that preserves the integrity of the original piece while avoiding any potentially triggering content—it’s a change I was absolutely happy to make in the interest of creating a safe and inclusive environment for everyone in my community.‘”  He brow beat somebody else into changing their work to appease his feelings.

Good news is at least a few student disagreed with him:

“I love our radical liberalism. However, I’m not in love with the trend of shutting down voices that don’t align with liberal ideologies.” – Alessandra Elliott

““I actually love the mural and thought it was obvious that it was about the flower power movement/a message of anti-violence.” – Jennifer McNamara

But they both sound like white women, so their opinions don’t matter.

A professor at an unidentified western state college has decided that it is her duty to render one of her students a unperson for the egregious act of thoughtcrime.

See, one of the professor’s students, a girl name Sarah, demonstrated an interest in firearms by stating that she fired an AK-47 over winter break and that she was looking forward to obtaining her CCW permit.  This last statement was not made to the professor but to another student and the professor overheard it.

This, by the way, led to an incredibly woefully ignorant and bigoted statement by the professor:

“I overheard her confiding that she was looking forward to getting her concealed-carry permit. (Disclosure: I don’t teach in Texas.) I hadn’t known we had such permits in our state but apparently we do. Or did. Students could legally come to the campus armed until recently, when our legislature banned weapons from all state university campuses.”

“Disclosure: I don’t teach in Texas.”  Oh god forbid she teaches in Texas.  Do you know that THOSE PEOPLE are like?  They are not safe for civilized, gun-fearing liberals to be around.  You can just feel her hatred for the Texas drip from the page.  Knowing that she went to MIT (because everybody who went to MIT feels the need to mention it whenever the situation allows, and when it doesn’t allow – name dropping is the true mark of an Ivy Leaguer), her hatred and steryotyping of everyone below and Mason Dixon and Lone Star State is not socially acceptable, but encouraged.

“I hadn’t known we had such permits in our state but apparently we do. Or did.”  Yes, your state does have such permits.  All 50 states do.  It’s not just Texas anymore that you can walk down the street wearing a gun.  We permit holders are everywhere.  I know, you must be terrified that they let us crawl out from our double-wides and moonshine shacks and mingle among you decent folk.

Now that the professor knows the truth about Sarah, that she is one of us.  The professor is having second thoughts about writing Sarah a letter of recommendation to a carrer boosting, credential program.  Sarah likes guns and the professor is now tempted to destroy Sarah’s chance at a rewarding career because of it.

But it’s not what you think.  The professor doesn’t hate guns.

“I belonged to a family with guns. They were used for hunting and trap shooting. I can’t remember ever not knowing where both the shotgun (a Browning over and under with the most lovely filigree you ever saw), and the rounds (little red tubes with shiny, cupped copper bottoms) were stored. They were in separate locations, as per standard gun-safety practices, but eventually they both disappeared. At some point my mother let it be known that she had gotten rid of them.”

Let me make one thing clear.  If you are anti gun, but you try to make yourself look like a moderate by talking about daddy’s trap gun or grandpa’s squirrel rifle and that you are not scared of guns because you shot a .22 at pop cans when you were a kid; that is the anti gun equivalent of saying you are not a racist because you have one black friend, and you’re not scared of black people because your black friend is a CPA from the suburbs.  Guess what?  You’re still anti gun… and a racist.

But back to Sara and the fact that the professor agreed to write her a recommendation BEFORE she found out Sarah liked guns, and now the professor is trying to figure out how to wiggle out of it while maintaining the moral high ground.

Allow me to clue you in on something professor, you lost the moral high ground already.  You’re a bigot and you are trying to act on your bigotry without getting in trouble.  You sort of know this already, because your are feeling uneasy about your moral quandary.  You just don’t get WHY you feel uneasy because you are putting your political ideology above a passionate student’s future.  You are going to stand in the way to Sarah’s career because her political leanings don’t align with yours.  That makes you a good Liberal and a terrible person.

If you had the courage of your convictions, you would have published this article with your real name and where you went to school, so that Sarah, and her parents, and all the other students, and their parents, know that if they want the chance to live productive lives and own guns, they needs to make sure that they don’t let you get anywhere near them.

You are a bigot and a coward and you don’t deserve to entrusted with the shepherding of student’s lives.