Only one of these is allowed in school

This is what happens when you mix being woke, a Progressive goverment, and legalized marijuana.

THORNTON, Colo. (CBS4) — A school district has apologized to parents after hosting a drag queen as part of a career day. A spokesperson for Adams 12 Five Star schools said Rocky Top Middle School staff should have notified parents a drag queen would be speaking to their children before allowing the speech to happen.

Who in their right mind thought this was in any way appropriate?

Look, I’m a tolerant human being.  I don’t really care what a man wants to do in the privacy of a his home or at a club.  But my cousin was gay.  I’ve been to South Beach a few times.  I’ve seen a drag show or two.  I am familiar with “Drag Culture.”  I don’t care if RuPaul’s Drag Race has been on for almost a decade and has “mainstreamed” drag, I know its origins and the double entendre and overt sexual themes that are at its core.

You don’t do that at a middle school.

Students at Rocky Top in Thornton range from 6th to 8th grade. The drag queen, identified as a woman who goes by “Jessica L’Whor,” is a relative of one student. The district confirmed she was invited to attend career day.

His stage name is pronounced “la whore.”  Let that sink in.

“I knew it was going to be controversial because that was nothing that would be allowed when I was in middle school,” L’Whor said. “At the same time, it opened up a door for conversation.”

District spokesperson Joe Ferdani said staff believed the visit by L’Whor would demonstrate their inclusiveness of all, no matter how they prefer to dress.

So they are now trying to sell this disaster as a “diversity and inclusion” thing.  Bullshit.  They got called on their bad decision and are covering.

“The school’s focus is to have an event that is representative of the diverese backgrounds and careers in the community,” Ferdani said.

L’Whor said dressing in drag is her career. She told CBS4’s Dillon Thomas her work takes her around the country and often leaves her working six days per week.

Woe be to the school administrator if my kid came home from school and said “daddy, I don’t want to do my math homework, I want to put on eye makeup and tuck it because Suzie’s uncle said he makes a lot of money doing that.”

Anybody who is familiar with Action Figure Therapy and the character of EOD might have seen this meme. 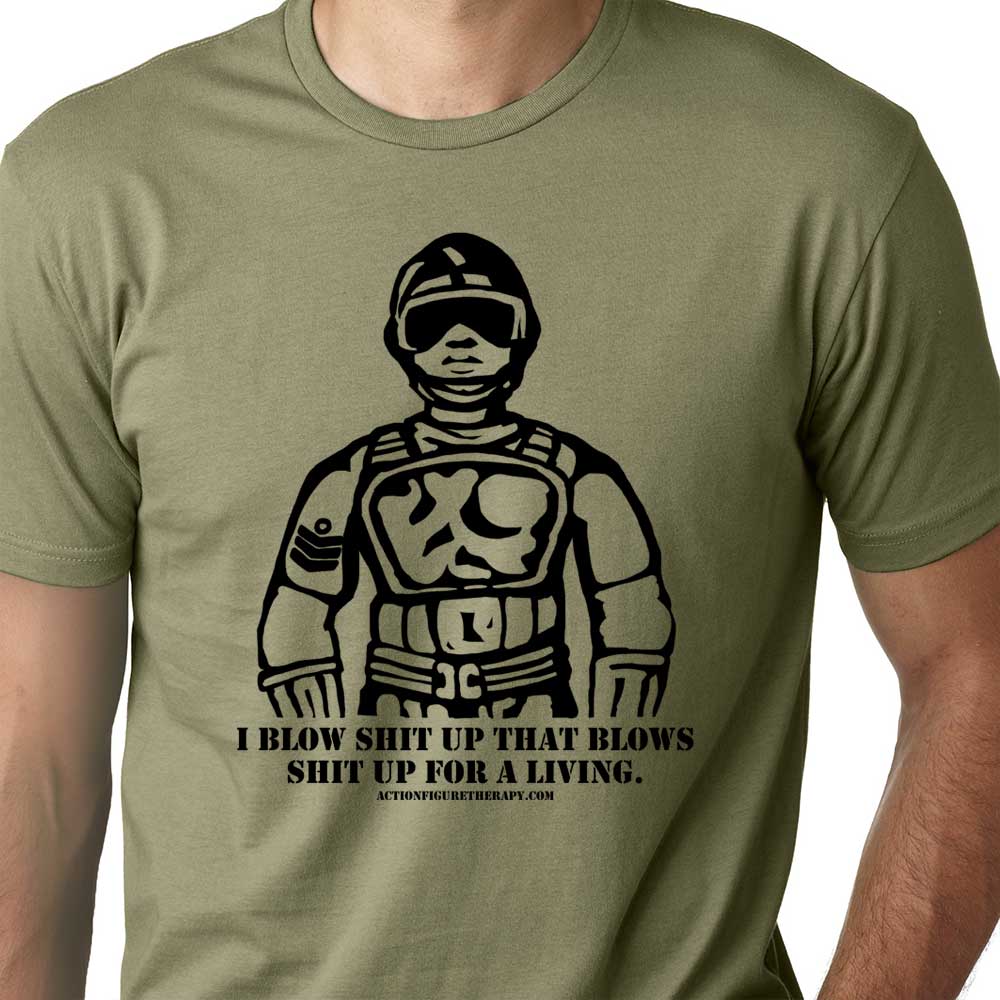 I’ve said it before and I’ll say it again, I have three degrees in engineering, BS, MS, and PhD.  I am a licensed professional engineer.  I’ve been published in peer reviewed journals.

If you ask me what I do for a living, I will say “I make the shit that blows shit up.”

And I love my job.

I have a real doubt that I would be allowed to speak in a Colorado middle school.

“So kids, who wants to learn how to adjust the gas port size in a gas operated machine gun to ensure proper bolt velocity without battering the receiver to death?”

“Who wan’ts to know how to calculate the proper shape charge angle to get maximum penetration through RHA out of a 40mm HEDP grenade?”

“Who wants to know which ogive profile gives the best performance out of a .338 caliber projectile to have maximum terminal performance on a target past 1,000 meters?”

Yeah, I’m never being invited back despite literally millions and billions of dollars of research and defense contract money, as well as the lives of our servicemen and women overseas depending on me knowing how to do that correctly.

The school would probably have Children and Family Services pay my home a visit too.

Maybe that’s what I’ll do.

I’ll go to Colorado and give a lecture on case hardening of machine gun bolt heads for maximum endurance life in sustained fire while wearing high heels and fake tits.  I think that might cause their brains to short circuit.

3 thoughts on “Only one of these is allowed in school”