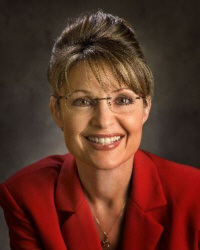 I have not made my mind yet on Sarah Palin’s nomination as VP. First impression is I like her, but I do want to learn a bit more before going full burst. However things look good because the Dems are throwing a gigantic hissy fit about her supposed lack of experience and how 2 years as governor of Alaska cannot prepare her for a job as important as the Vice Presidency which is to say that Dems are afraid that since McCain is old, he may kick the bucket and a woman (Lib Dem Says:Gasp! Only Dems are allowed to have a woman President!) with only two years of experience as governor (Lib Dem Says: Please ignore Obama’s 140 days as Senator) may become POTUS. The Horror! And of course the Lib Media is going after her, her redneck husband (Lib Dem Says: Snowmobile races? Is there anthing more retarded?) and her 17 year old pregnant daughter. Top that with the fact that she is an NRA member, likes guns, fishes and hunts to boot. Lib Dem Says:Oh My G-O-D! Poor Bamby!)

So what we have is a fighting conservative with two years of experience as governor, with guts to shake the corrupted old boys network within her own local party, who won the governorship on merit and not money, large family with problems but loving anyways and loved guns and went shooting & hunting & fishing and may reach the Presidency if something happens to the elected President. It sort of sounds familiar…. I heard something similar that happened before… Oh yes!

I think she is starting to look pretty darn good just about now.

On toting guns and verbose stupidity.