Smashing the hand that supports you. 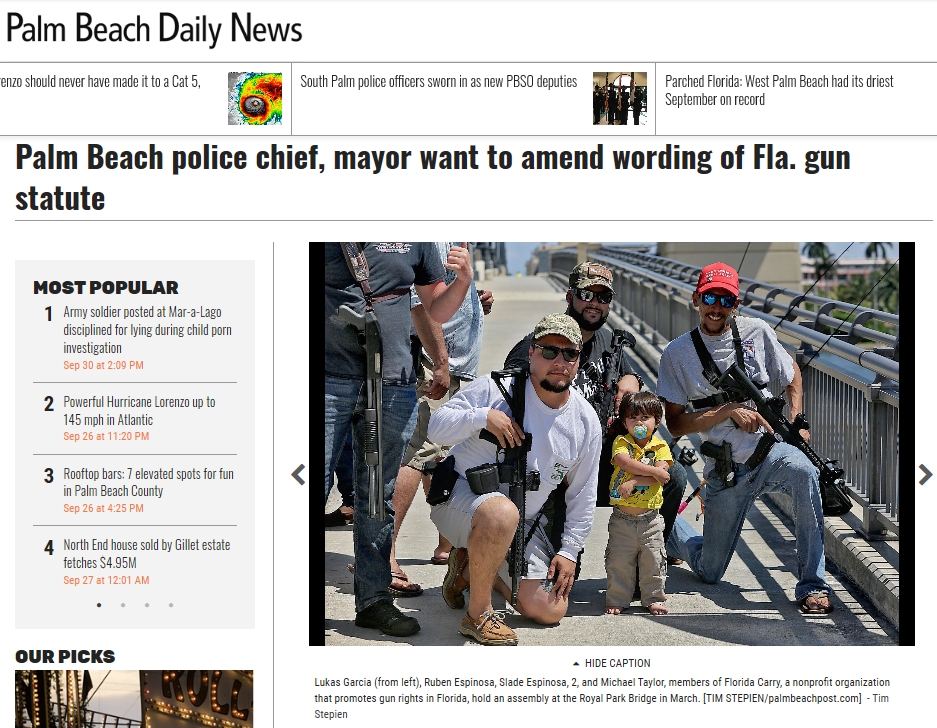 The move by Police Chief Nicholas Caristo and Mayor Gail Coniglio comes in the wake of a March incident when members of the gun-rights group Florida Carry displayed firearms at the Royal Park Bridge.
Palm Beach Police Chief Nicholas Caristo and Mayor Gail Coniglio are urging the state senate to change the wording of the Florida Weapons and Firearms statute.
They have written a letter to State Sen. Bobby Powell prompted by the Town Council at its April 23 meeting after the gun group Florida Carry, which supports President Donald Trump, stopped at a bridge within the Town of Palm Beach openly displaying firearms.

They are requesting that the language in the statute be expanded to say a lawful activity “may not be conducted within 1,500 feet of the real property comprising any school, house of worship, government building, or guarded beach.”

This not unexpected. We are just simply seeing the fruits of the Tree of Dumb growing and I am keeping my eye on the Florida Legislature website for when the bill is up for consideration. A bill that probably will be discussed in at least one sub committee and I am willing to bet NOT ONE of the Chest Thumpers® will show up to the hearing to fight against something that should have not been brought up in the first place, but was because you needed to play dumb games.

But that is not as bad as the next item. This is something that slides right into the domain of stupid. 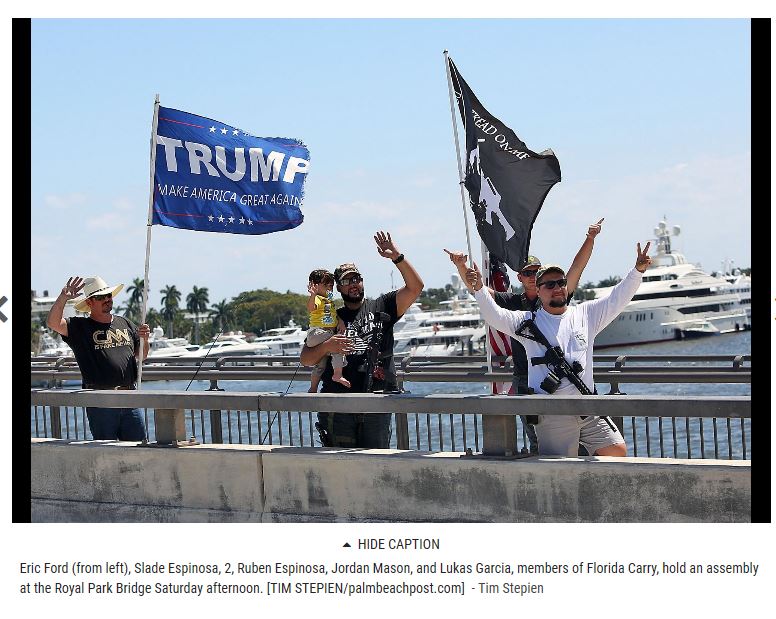 In its website, Florida carry identifies itself as a non-profit, non-partisan, grassroots organization who has applied for 501(c)(4) status. Lord knows the last time the website was updated, so I don’t know if the 501(c)(4) status is active or still pending. If I am not mistaken, a 501(c)(4) organization is federally Tax Exempt as long as it does not engage directly in politics as in supporting a party or a candidate or they risk losing the Tax Exempt status and getting audited.  If you notice in the article, the paper had no problems sticking Florida Carry as direct supporters of President Trump  from the get go.

From what little I have been able to gather, Florida Carry and many of its members was not aware that the Trump flag was going to be used. Also, members have commented about the non-partisan nature of the organization, perhaps worrying about the tax exemption or maybe because there has been a change on the group they were not informed about which is natural.

And no, the OCI clan did not apologize nor it seems they understand the consequences of their actions which can go as far bad as Florida Carry being shut own and its leadership ending up in Federal trouble for violations of the Tax Law.  And it probably has not crossed their minds that helping the Opposition with ideas on adding Gun Control bills to the legislative session is something we should avoid entirely.

One thought on “Smashing the hand that supports you.”