Sorry not sorry on Jew hatred 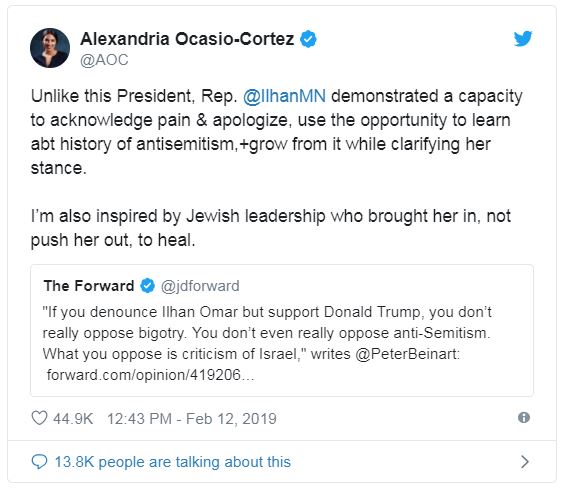 I read a great article in Tablet titled:

No More Mr. Nice Jew
How to deal with those who hate us? Two historical examples tell us why dialogue is to be avoided.

It’s a good start but doesn’t cover everything.  Ilhan Omar’s antisemitism isn’t the result of ignorance.  It is the result of a deep seeded ideology.

Any “learning” she receives on the subject won’t make her less of a Jew hater, it will just teach her how to hide it better.

I cannot understand these Lefty Jews who do not get that.  As though if they just sat down with her and had coffee she would suddenly stop trafficking in antisemitic conspiracy theories and let the Jews have sovereignty in their home land.

It is a ridiculous premise.

So let’s see how well Omar learned her lesson.

Rep. Ilhan Omar, D.-Minn., who earlier this month was forced into a hostage tape style fake apology for anti-Semitic tweets, is unrepentant. Speaking at a liberal event in Washington, she accused Jews who have criticized her anti-Semitic statements as holding her to a different standard because she’s Muslim, while again peddling a classic anti-Semitic dual loyalty smear.

Cut to Wednesday night, when Omar and Tlaib were at a left-wing event held at the activist cafe Busboys and Poets.

Busboys and Poets is a restaurant and public forum in DC that styles itself after a European socialist salon, where Leftist activists can hang out under a mural inspired by Howard Zinn and promote Progressive ideas and antisemitic conspiracy theories.  It was founded by Jew hater and Iraqi Progressive activist Andy Shallall.

“It is about the Benjamins,” shouted one audience member to laughter and acclaim, referencing Rep. Omar’s now-deleted tweet linking Congressional support for Israel to Jewish influence and lobbying. To this, Reps. Omar and Tlaib both smiled along furtively.

Boy those people loved that quote.

According to the report, “the moderator asked what ‘we as a community here can do to support you criticizing Israel for some of the war crimes that it has done so that it’s not seen as “‘you’re anti-Semitic’?”

The report reads: “Rep. Omar elaborated that when she hears her Jewish constituents offer criticisms of Palestinians, she doesn’t automatically equate them as Islamophobic but is ‘fearful’ that people are painting her as anti-Semitic because she is a Muslim. Omar continued, ‘What I’m fearful of — because Rashida and I are Muslim — that a lot of our Jewish colleagues, a lot of our constituents, a lot of our allies, go to thinking that everything we say about Israel to be anti-Semitic because we are Muslim,’ she explained.”

Actually…. that is a pretty solid reason.  How come the Left never questions why there is so much targeted antisemitic violence by Muslims.

It’s not like the Prophet Muhammad went out of his way to slaughter Jews and say that at the end of the world even the rocks and trees will help the Muslims kill the Jews.

As if any reminder were needed that she’s learned nothing, Omar then renewed the dual-loyalty line of attack on supporters of Israel, saying, “for me, I want to talk about the political influence in this country that says it is okay to push for allegiance to a foreign country.”

Does she mean like Rep. Tlaib’s goal of aligning the US against Israel and for the Palestinians and the same people who bombed the USMC barracks in Lebanon and have traveled to Iraq just to kill Americans?  That kind of foreign influence. 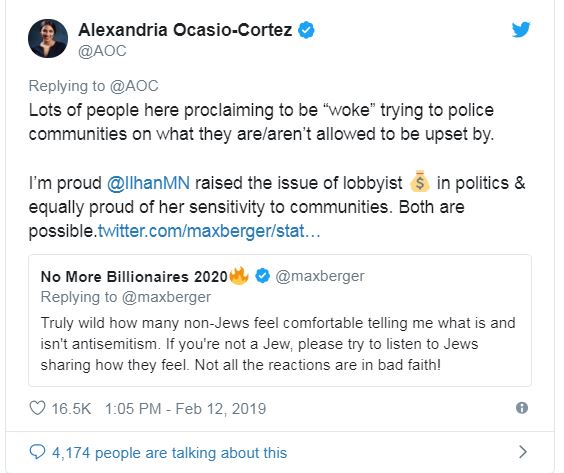 The Jew haters responding to her love this.

Omar echoed the antisemitic conspiracy theory that the Jews have bought Congress or the US Government.  This conspiracy theory is all over the Middle East, repeated by Lewis Farrakhan, and Jew haters on both the far Left and far Right.

AOC and her fans totally ignore and whitewash over this with “she’s just talking about lobbying money.”

When in reality Pro Israel donors, like the NRA, are way down on the list of big money donors.  Left leaning unions and Planned Parenthood/NARAL are much higher up on the donation charts.

But the Left will never admit to it.  Only “ammosexuals and teh Joooooos donate evil blood money to buy Congress.”

The Democrats woke heroines are two raging Jew haters who can’t seem to attend an event or open their mouths without saying something antisemitic  or surrounding them selves with other antisemites, and one socialist who covers for the others’ Jew hatred.

Between their antisemitism and support for South American Dictators, I wonder what future people like me have in the United States if they are legitimately the future of the Democrat party and America.

One thought on “Sorry not sorry on Jew hatred”