The Coronavirus war on Orthodox Jews

The Coronavirus outbreak has been an opportunity for the Left in government and the media to all but declare outright war on the Orthodox Jewish community.

The other day I wrote a post about the Washington Post’s needless criticism of Orthodox Jews in Israel continuing to use the ritualistic bath, the mikvah.

It should be noted that just today, the headlines from Israel are:

Coronavirus: Cases decline, gov’t to present plan to go back to normal

Absolutely nothing about the mikvah in Israel put people at risk, but that didn’t stop the Washington Post from their Jew-baiting.

I thought that was the end of this story but I was wrong.  The Atlantic covered the same topic, but about Jews in the United States.

Orthodox Jewish Women Are Facing an Impossible Choice Right Now
Women who observe the Jewish laws of sexual purity have to immerse in a ritual pool after their period. Doing so during an outbreak is complicated—and potentially risky.

The Atlantic explains how important the mikvah is to Jews.

Although Orthodox women are by far the most common mikvah users, the pools are also used for Jewish conversions, life-cycle events such as weddings, and men’s immersions before prayer. By and large, these other uses have been put on indefinite hold. “There are a lot of fixtures of Jewish life that Jews can actually live without,” Rivkah Slonim, a Hasidic woman who has written and lectured extensively about mikvah use, told me. “We can be without synagogues. We can be without a Torah scroll. We cannot, in Jewish law, move forward as a community … without a mikvah.” Immersion is a commandment that comes directly from the Torah, and the punishment for violating it—being cut off from God—is severe. That’s why many communities have kept their mikvahs open even when everything else is closed.

This is the same reason Israel kept their mikvahs open.

Secular news outlets have widely condemned people in New York’s and New Jersey’s Orthodox Jewish neighborhoods who have refused to comply with stay-at-home orders, gathering by the hundreds for funerals and weddings against strong government advice.

This has been a major problem, getting very close to crossing the line of outright “Jew poisoning the well” levels of anti-Semitism.  All but blaming the insular Orthodox Jewish community for the spread of the virus but ignoring all of the lack of social distancing that occurs on NYC public transportation.

The Crown Heights Mikvah in Brooklyn is seeing 20 to 25 women each night, which is when women typically immerse, said Leah Yechielov, an attendant there. This is a significant reduction in the average traffic to their three pools, but still means that roughly 150 women are going in and out of the facility each week.

How does that 150 people per week compare to the daily traffic of essential services in New York like bodegas?  Probably a drop in the bucket.

Many Jewish leaders believe mikvah immersion is safe. Lila Kagedan, a rabbi who works as a bioethicist at several hospitals and universities in New York and Boston, has spent recent weeks advising rabbis and mikvah directors around the country about how to handle the coronavirus crisis. She constantly monitors the latest guidelines from the Centers for Disease Control and Prevention and local governments. Mikvahs are not distinctively risky spaces, she told me. She pointed out that many more people go through a grocery store on a typical day than through a mikvah where women are spacing out their immersions, and mikvah attendants aggressively wipe down surfaces and treat the water with sanitizing chemicals. Even so, scientists are still determining how the coronavirus travels through the air and how much danger is involved in different activities. And people who appear to be healthy can infect others, according to the CDC.

See, it doesn’t matter how the Jews work to keep the mikvahs clean and do everything possible to prevent the spread of the Coronavirus during the ritual, and never mind that not one case in Israel has been tied to their mikvahs, the Jews are still doing this weird thing that puts people at risk.

Orthodox Jews have been targeted for not-socially distancing during religious ceremonies.

New Jersey cops broke up two large weddings this week that went ahead in violation of officials’ warnings against large gatherings, according to a new report.

Police busted up both celebrations — one at Fountain Ballroom and the other at Lake Terrace, both in Lakewood — around 8 p.m. Tuesday and reminded venue staff of Gov. Phil Murphy’s order banning gatherings of more than 50 people, NJ.com reported.

All guests and workers were forced to leave, Lakewood police Capt. Gregory Staffordsmith told the outlet.

A wedding at Ateres Avrohom in Williamsburg, Brooklyn, was shut down around 4:30 p.m. Tuesday after community members complained to City Hall, which sent the FDNY to clear it out, FDNY spokesperson Jim Long told The Post.

“They were operating outside of the recent directives in regards to social distancing and we addressed the issue based upon health and safety,” Long said.

Later that evening, video emerged of another Hasidic wedding on East 29th Street in Midwood, Brooklyn, showing revelers jumping and gyrating, arm in arm, in a cramped driveway, according to political consultant Menashe Shapiro, a “modern” Orthodox Jewish man with ties to the community.

Then there was the now-famous NYPD mishandling and breakup of a Rabbi’s funeral in New York.

It didn’t stop there.

At least one person was taken into custody after police broke up another crowd at an Orthodox Jewish funeral in Brooklyn on Thursday.

It happened along a stretch of 15th Avenue and 43rd Street in Borough Park.

The incidents come two days after police had to break up a large crowd assembled for an Orthodox funeral in Williamsburg.

It’s not just weddings and funerals, everywhere Jews congregate is being rousted by police.

The NYPD dispersed crowds of Hasidic Jews who showed up to get free food at a Brooklyn Yeshiva amid the coronavirus outbreak in New York on Wednesday afternoon, police said.

The free-food offer at the Yeshiva on Keap Street near Division Avenue in Williamsburg drew long lines of people from the community when they opened their doors from 9 a.m. to 11 a.m., police said.

Jews show up to get free food at a Jewish religious school they the NYPD breaks it up.

Muslims get handed half-a-million free meals by the City of New York for breaking the fast during Ramadan.

As part of ongoing efforts to support New Yorkers during the pandemic, the city will increase the supply and distribution of halal meals at 32 Grab and Go sites across all five boroughs where there are large Muslim populations. More than 400,000 halal meals will be available at 435 school sites where all New Yorkers can go for food.

That 920 meals per site.  Crowds of Muslims given taxpayer-funded Ramadan food is fine.  Jews lining up for food at a Yeshiva are driven away with bullhorns.

The assault of Yeshivas has lead to headlines that one could imagine being printed in Der Stürmer.

Brooklyn yeshivas are operating in the shadows to avoid coronavirus lockdown restrictions, according to a report.

The Orthodox Jewish schools are continuing to hold classes in private apartments and in locked buildings throughout Williamsburg, a source told The Forward.

The Yshevias have had to move underground and out of Synagogues because:

NYC Mayor to synagogues: Close for coronavirus or be shut down permanently

Jews are unable to hold religious schools inside the Synagogue or risk it being closed, so they teach underground in secrete gatherings that get broken up by the police.

Video clips obtained by The Post and posted online show a heavy police presence amid a chaotic scene in a Hasidic Jewish neighborhood in Brooklyn on Thursday afternoon — two days after a massive funeral there that drew big crowds despite coronavirus restrictions.

In one clip, horns honk, people shout and sirens wail as a cop orders bystanders, “Back up! Back up!” in front of the Judaica Corner store in Borough Park.

This is getting violent over here. They just arrested somebody,” a narrator says.

The chaos unfolded in the wake of a “zero tolerance” warning from Mayor Bill de Blasio to New York’s “Jewish community, and all communities” regarding violations of social distance rules.

A spokesperson for the NYPD said cops responded Thursday to a synagogue on Kent Avenue in Brooklyn, where they issued two summonses over doors being chained from the inside. Another summons was issued for social distancing.

This absolutely unbelievable harassment of a very visible and insular community.

Understand that New York City is being very selective in how it enforces social distancing.

Hundreds of New Yorkers were caught flaunting coronavirus social distancing restrictions in Brooklyn’s Domino Park on Sunday — and cops did little about it, according to witnesses.

The scene, captured on a video posted on Twitter, shows rows of people soaking in the sun at the riverfront park in Williamsburg despite City Hall’s professed crackdown on large gatherings — and Mayor Bill de Blasio’s initiative to have residents snitch when they see lockdown violations.

Look at all these non-Jews not getting harassed by the NYPD. 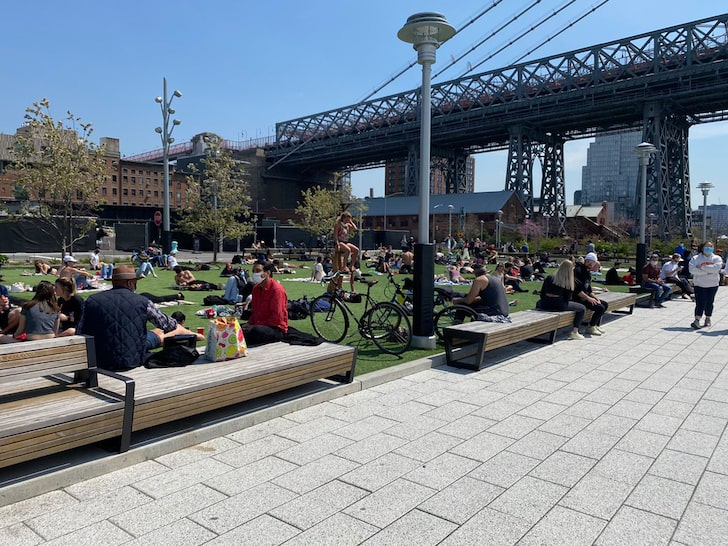 Then there is this headline:

Coronavirus News: Social distancing is not happening on the NYC subway

MTA has reduced service because of the enormous drop in ridership, but at least during rush hour riders seem to be placed in unsafe, overcrowded environments on subway trains and buses.

Photos and videos posted on social media and shared with Eyewitness News on Wednesday showed standing room only on a 5 train at the Jackson Avenue Station.

Look at all these people not get rousted by the NYPD.  Why?  Because they are not Jews celebrating a religious event.

How about these fabulous gay men frolicking in a park in Greenwich Village in the sun?

Christopher Street Pier – 4:48pm. Not sure if the message is getting through. pic.twitter.com/RXNQ5pUWkn

The NYPD would be loathed to roust gay men getting tanned and be accused of attacking New York’s LGBT community in one of its famous gay districts.

If they were Jews praying on the other hand, Progresssives would have no problem with them ending up dispersed or in handcuffs.

I’m not the only person to have noticed this.

The Coronavirus lockdown in New York City and the surrounding area has unleashed local government and the police to stamp the boot in the face of the Orthodox Jewish community.

When it is young black men and Muslims beating the piss out of Orthodox Jews, destroying property, and vandalizing Synagogues, the NYPD is nowhere to be found.

When a bunch of Jews gather together to pray during a virus outbreak, the NYPD is there to bust it up like 1936 Germany.

This is absolutely obscene and there is no excuse for it.

The true character of the leaders of NYC and the surrounding area has been revealed.  When the opportunity exists to harass religious Jews, they will indulge in it.

6 thoughts on “The Coronavirus war on Orthodox Jews”