The difference between Americans and Venezuelans (hopefully)

Socialist everywhere are the same.  It doesn’t matter where you go, the behavior of socialist is the same.

The high ranking members of the Soviet Politburo had their Dachas and cars and fine food, while the working people of the Soviet Union lived packed into concrete boxes and went hungry.

Fidel Castro and his brother Raul live in the lap of luxury, while the rest of Cuba is impoverished and dilapidated.

Hugo Chavez died a wealthy man, his daughter is the richest person in Venezuela, and she and Maduro’s family are exceptionally rich, eating steak cooked by a celebrity Communist chef.

AOC has a luxury apartment in New York and another in DC, and has a car and driver chauffeur her any distance further than a couple of blocks.

They know that because of their connections and influence that Socialism will be good to them.

None.  Our socialist are not any more exceptional than socialists anywhere else.  Ours are motivated by the same greed and self serving interests, and so American socialism will follow the same path as socialism elsewhere.

A buddy of mine sent me this article from The Daily Mail.

The heartbreaking footage that lays bare the depth of Venezuela’s crisis: Mother carries body of her emaciated 22lb daughter to a morgue after the 19-year-old died when doctors couldn’t treat her because the blackout forced hospitals to shut 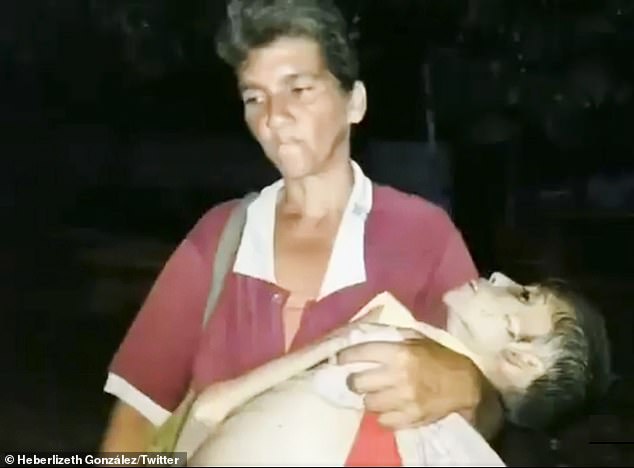 Elizabeth Díaz (center) carries the body of her daughter, who died Saturday after the Venezuelan massive blackout didn’t allow doctors to treat the young woman

A severely malnourished 19-year-old girl died in her mother’s arms after doctors in Venezuela were forced to turn her away because a massive blackout shut down a hospital.

Heartbroken mother Elizabeth Díaz was forced to carry her daughter’s body, which weighed just 22 pounds, through the streets to a morgue.

Díaz visited a local Integral Diagnostic Center [CDI] in the northern city of Valencia on Saturday night but was immediately turned away by doctors because their shift had ended because the facility didn’t have any electricity.

The mother was advised to visit another medical center in Las Lomas where she was assured the staff could provide treatment for her daughter’s cerebral palsy and chronic malnourishment.

According to Díaz, the young woman was repeatedly convulsing and her condition worsened before she felt her daughter’s body stiffen.

Upon arriving at the second hospital, the family was shunned at the entrance because it didn’t have a functional backup power generator.

The heartbroken mother then carried her daughter’s body through the darkened streets to a local morgue.

The mother’s dire economical situation hasn’t allowed her to reclaim her daughter’s body for a proper burial service.

Make no mistake, this is Medicare for All and the Green New Deal.

Two different hospitals turned away a dying young woman because their shifts has ended and they didn’t have gasoline to run their generators.

“Please, tell me they failed because they didn’t try socialism hard enough. Because, God knows, if that were my daughter or wife, I’d wage a crusade against that regime that would be written about for hundreds of years.”

My buddy, like me, is a middle class American.  Like the rest of middle America, we are used to some very basic things.

When we turn on the faucet, we expect clean, drinkable water, that is hot or cold, on demand.

When we flip a switch, we expect our lights to come on.

I have health insurance that is covered by my employer and I pay for out of my paycheck every two weeks.

I expect that when I go the local hospital with my child in my arms in an emergency, he or she will be taken care of on the spot.

When we go to the grocery store, we expect there to be fresh food on the shelves and that our money is good enough to buy it.

I have lived through hurricanes in Florida and blizzards in South Dakota.  I have had the power go out, the water shut off, and the shelves go bare, but those were all temporary.  It lasted a few hours to a week at most (Hurricane Andrew), and it was always the result of a natural disaster, the proverbial act of God.

What we as Americans do not expect is that BECAUSE of goverment, we are reduced to getting our drinking water out of an open air sewer and drainage ditch.

We do not expect to find our grocery store shelves bare for weeks on end and to stand in bread lines for hours for nothing.

We do not expect the power to go out because everyone who knew how to run the power plant fled or was arrested, and for what little food we have to go bad and rot.

We do not expect to have to eat our pets, stray dogs, and road kill, or hunt for food in garbage trucks and landfills.

We do not expect our money to become so worthless overnight, that all we can do is buy rotting meat and offal in an alley.

And we most certainly don’t expect to do this while we are told by a multi millionaire career politician, that the problem is “the money is in the wrong hands.”

I know that there are plenty of those in middle America who are not going to be very, very angry when the lights go off, the water stops running, their pantries go bare, and they know it’s all the politicians’ fault.

We have a collective memory of the words of one of our Founding Fathers,

The tree of liberty must be refreshed from time to time with the blood of patriots and tyrants.  It is its natural manure.

7 thoughts on “The difference between Americans and Venezuelans (hopefully)”