The inevitable shrinking of the Miami Herald continues 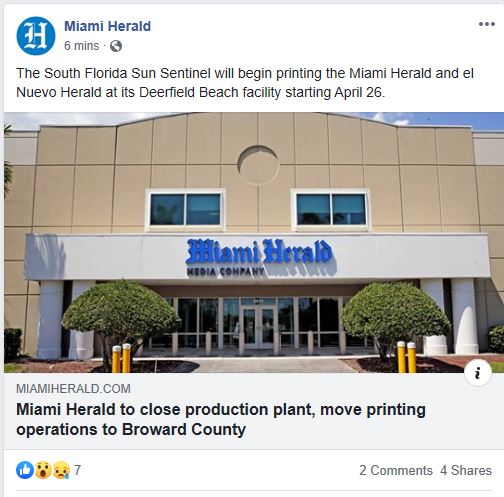 The Miami Herald Media Company announced Tuesday it will move its printing and packaging operations to Broward County. The South Florida Sun Sentinel will begin printing the Miami Herald and el Nuevo Herald at its Deerfield Beach facility starting April 26.

The newspapers have been printed in Doral since the company moved from its downtown Miami headquarters in 2013.

The Herald has been disconnected from the people they were supposed to inform for a long time now. And yes, the new era of news online has to affect the old way of doing business, but you still need to produce content that is of interest for your population. The Herald’s Top People have been missing clues on how things have changed:

The Doral printing plant was built in 2012 and 2013 on a six-acre parcel next to the Miami Herald Media Company’s headquarters at 3511 NW 91st Ave. The printing press building was sold in February 2016 for $13.85 million to the pension plan of McClatchy, parent company of the Miami Herald and el Nuevo Herald. The property and building is assessed by Miami-Dade County for tax purposes at $14.5 million.

You build a massive printing shop and then in less than three years, you have to sell it? Ands now you have to subcontract your printing needs to the paper from the next county? Somebody added two plus two and got twenty two. That is not a financial; punch in the nuts but a harsh kick in the gonads.  And believe you me, it is not the executives the ones that paid for it.

But the paper will continue to be printed because thousands of bird cages need poop liners.

One thought on “The inevitable shrinking of the Miami Herald continues”