Congresswoman Ilhan Omar is perhaps best known for her Tweet attacking Israel using words borrowed straight out of the Protocols of the Elders of Zion. 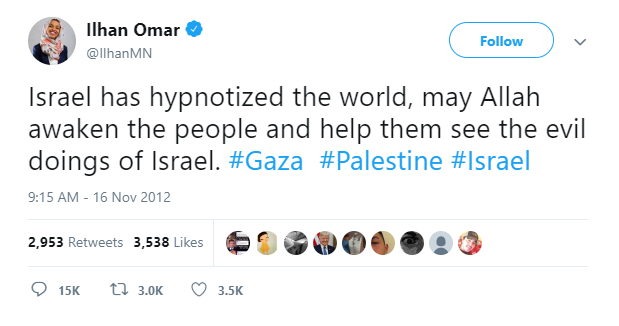 During an interview, she said she didn’t know that invoking Antisemitic tropes in her “comments would be offensive to Jewish Americans.”

So fast forward to the Covington Catholic School story.

The full video shows that a group of Black Hebrew Israelites were screaming horrible things at the Covington boys, including calling them “dirty ass crackers,” “future school shooters,” “Incest kids,” and “faggots.”

Black Hebrew Israelites is listed by the SPLC as a hate group.  Vox tried to whitewash the group, calling them a “a rarely discussed religious group,” but couldn’t ignore the SPLC’s description of them.

The SPLC refers to them as an “extremist sector within the Hebrew Israelite movement whose adherents believe that Jews are devilish impostors and who openly condemn whites as evil personified, deserving only death or slavery,” and also have a history of sexist and anti-LGBTQ remarks.

Given what we’ve seen on video, that description is accurate. 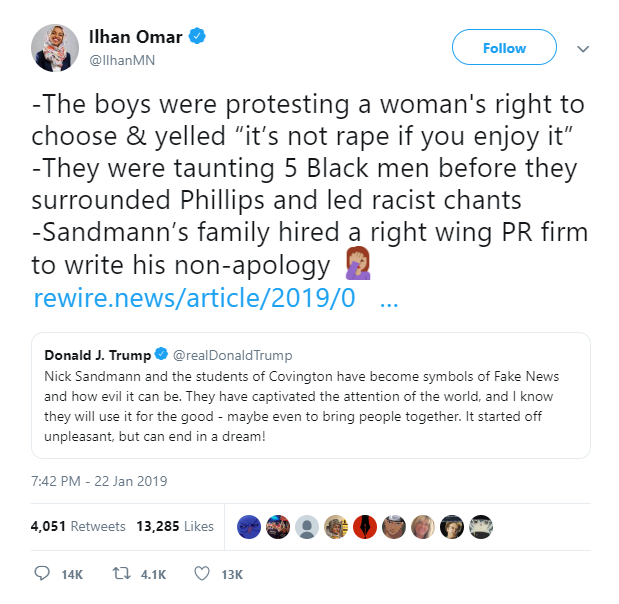 That Tweet is from yesterday.  More than 24 hours after all the details came to light.

Her facts are wrong, the boys did not taunt the Black Hebrew Israelites.

But it is noteworthy that the people she rushed to defend AFTER every other media outlet started to cover the whole story, is the one group that called Donald Trump a homosexual, called the boys faggots, and calls Jews in Israel lying devils.

I guess the Freshmen class of Democrats found one type of Israeli they like, the black supremacist cult that hates white people, Catholics, and Jews.

3 thoughts on “The Left finally found some good Israelis”