The revolution will eat Bloomberg’s people

Miguel posted a video this morning of protesters calling Bloomberg a fascist.

(To be fair, it’s hard for me to disagree with that assessment of Mr. McGunSodaVapingWalkingWhileTextingTransfatSugarBan)

But as history has shown us, the Revolution will always come for its own over purity tests.

Bloomberg might survive due to the amount of money he has in the bank.  Those who will pay the price are his supporters. 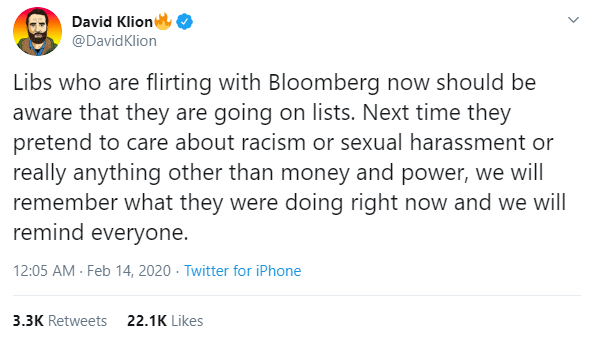 David Klion is a writer for Jewish Currents, which is a “Progressive, secular magazine” for the “Jewish Left.”  Really it’s a magazine for Communists who reject their Judaism but like to eat bagels and lox.

One would think that a Jew would uniquely understand the dangers of making lists of political enemies because Jews are pretty much always toward the top of those lists, but as I’ve said many times, Progressive/Leftist Jews stop being Jews and just become pure Leftists.

Matt Bruenig here is dispensing with the warning and going straight to making lists of names.

Every Socialist and Fascist (just two flavors of Leftist) government of the 20th century created lists of dissidents.  The people on those lists had their ashes scattered across Germany or were buried in mass graves in Poland or Siberia.

If the Democrat party manages to rig the primary to make Bloomberg “the Moderate” the winner, I have a feeling that the violence that we see directed toward his staff will be tantamount to what we’ve seen carried out by Antifa in Portland.  The Left always ends up destroying itself, and the Democrat offices and officials that will be responsible for this fix are located in deep blue states that have made room for Antifa in the past.

Normally I wouldn’t care if Leftists destroyed each other, but the revolution never has an “are we the baddies” moment.  The victors always end up being the worst and most extreme members.

Maybe I’m being overly negative, but what I see in the future for the Left is terrible for America.

2 thoughts on “The revolution will eat Bloomberg’s people”