They are both not wrong and why I hate Twitter

So I saw this going around the Internet.  It originally dates back to February, but I guess it was recently “discovered” so that it just started making its way around.  It even has a Reddit page. 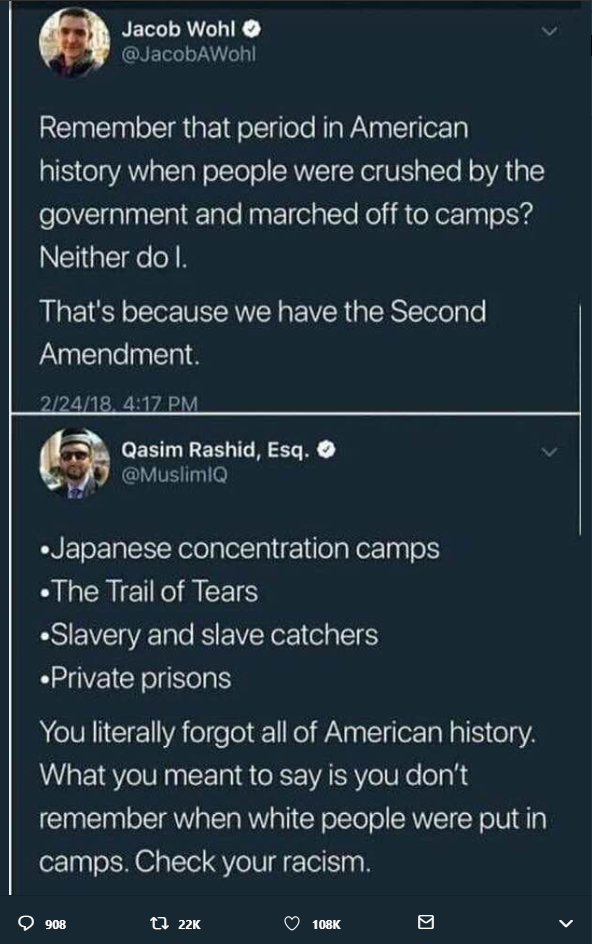 There is a lot to break down here.

I love Hanlon’s Razor.  It is an aphorism that states “never attribute to malice what can adequately be explained by stupidity.”

There needs to be one for situations like that states “never attribute to racism what can adequately be explained by thoughtlessness.”

Considering that Wohl is Jewish, he may have been thinking of a place like Auschwitz when he made his statement.  As awful as Japanese interment was, that pales in comparison to the enormity of what the Nazis did to the Jews.  If that was his perspective, not including Japanese internment isn’t a racist or white supremacist act.

Accusing him of such doesn’t start a dialog that allows the topic to be explored to a mutually edifying result, it only creates combativeness.

This is why I hate Twitter.  This is a perfect example of “Dunking Culture,” for lack of a better thing to call it.  Even Slate agrees “Dunking” Is Delicious Sport,
But it might be making Twitter even more terrible.

Rather than having a discussion for (once again) a mutually edifying result, the goal is to generate likes and re-tweets by stating something that makes the other person seem foolish.  Whether or not your statement isn’t equally inaccurate, is beside the point.  You dunk, you win, everyone else is worse off because 140 characters of snark isn’t edifying.

They are both right and both wrong and I can’t tell what the point of the response is.

If you go into the Twitter thread and read the replies, there are a lot celebrating the dunking, a lot calling Wohl stupid or racist, a few making vaguely anti-Semitic statements about Wohl, but none that I can see exploring this topic.

If, we go with my previous supposition, that Wohl, as an American Jew is thinking about contraction camps the way American Jews think about such things, , i.e., the Holocaust and possibly Soviet Gulags (if like me, you have Russian Jewish blood too), than he is factually correct.

The United States Government has never systematically rounded up, put into camps, and exterminated millions of United States citizens.

The Holocaust wiped out half of Europe’s Jews, roughly 6,000,000 people, in six years.  It was mechanized slaughter of unprecedented scale.   The Nazis killed another 5 million people as political dissidents or undesirables, bringing their body count to almost 11 million civilians total.

Stalin starved 7 million Ukrainians to death and murdered another 10 million Soviet citizens, either by execution or being worked to death, in Gulags in Siberia.

Total Japanese internment was 117,000 people.  During that time 1,862 people died during interment, mostly from old age or natural causes.

Korematsu is perhaps one of the most evil decisions made by any group of jurists in the 20th century, but it isn’t in any way tantamount to Wannsee Conference.

The Trail of Tears was one of the worst human rights violations (by modern standards) in American History.  Roughly 4,000 Indians died while being forcibly relocated.  The Soviets did that to pave one road.  The commander of Auschwitz would have called 4,000 dead a slow day of work.

I am not justifying Japanese internment in any way, or attempting to white wash it.  Likewise with the mistreatment of the Native Americans.  However, rational people can quantify evil and by both intent – relocation vs. extermination – and body count – thousands vs. millions – what happened in the United States is no where near what has done in Europe.

This seems like a good time to point out that FDR who signed Executive Order 9066, and Andrew Jackson who led the Trail of Tears were both Democrats.

Slavery and slave catchers are a more difficult to square against the Wohl tweet because that was private enterprise, not government.

Private prisons also difficult to square against the Wohl tweet because that is goverment contract work.  You can dislike the idea of a company profiting off imprisonment, but if the Iron Law of Bureaucracy has taught us anything, letting goverment employees and bureaucrats run a prison isn’t going to improve anything, and will probably make it worse.  We can have a much longer discussion of prison reform later, but the hatred of private prisons is nothing more than than the myopia of people who think that goverment bureaucracies are the fix for everything, and don’t realize how bureaucracies are generally the problem.

All that said, Mr. Rashid’s grander point – that the US government has engaged in human rights violations of ethnic minorities – is accurate.

Both Mr. Wohl and Mr. Rashid are right within a certain framework, and both are wrong in certain ways as well.

One of the issues I have with Mr. Rashid’s dunk is that I don’t think he has talked to many gun rights activists.  His Twitter feed shows that he is on the political Left.

Most, if not all, the ones I know – myself and Miguel included – have cited Japanese interment and the Trail of Tears as justifications for the Second Amendment.

Mr. Rashid has seemed to concede a point often made my the Left that “the Second Amendment only applies to white people.”  Again, this isn’t something that actual Second Amendment proponents believe.

I remember that had FDR lived through WWII, he would have had us Jews relocated under his M Project, so I support the rights of all people to defend themselves from goverment tyranny.

The fact that groups in the past have not been sufficiently able to defend themselves only justifies giving them more access to the tools of self defense.

But rather than have a discussion about gun rights for minority defense, someone decided to dunk and accuse racism instead and the thought termination began.