Moat people have shame in being wrong.

It seems that lawyers advocating for their clients have no shame in being wrong and announcing the magnitude of their own ignorance.

This is the First Amended Complaint in the case of Camacho v. Uvalde.  One of several lawsuits being brought against Daniel Defense after the Uvalde shooting.

The complaint first goes after the AR-15 as an almost magical talisman of death and destruction. 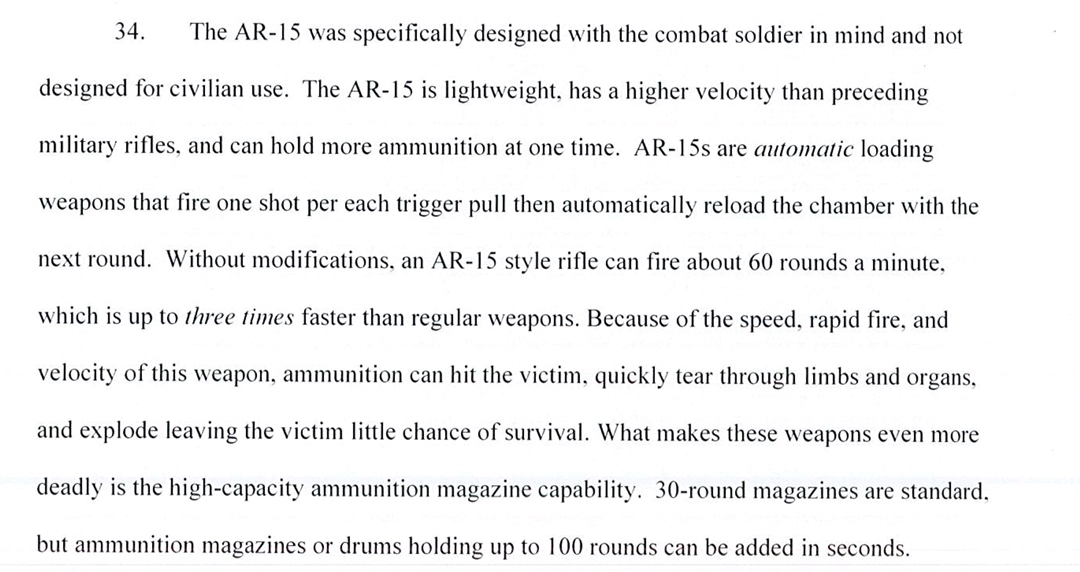 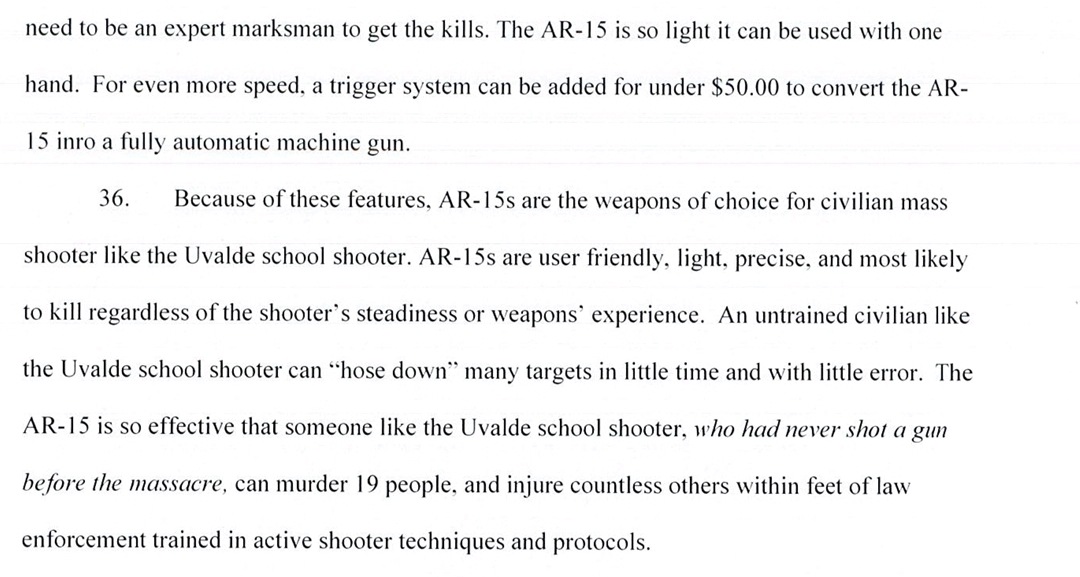 This as absurd and even contradictory.

The rifle is accurate every time but also designed for spray and pray and “waste time targeting” and “hose down” targets with “little error.”

Did the lawyer who write this confuse an AR-15 with a Zorg ZF-1?

The AR is functionally not simpler than other guns, even other semiautomatic guns.  The number of problems I’ve seen people on the range have with them is proof of that.

I don’t want to sound morbid or smarmy, but the shooter fired 164 rounds between the crash and the school, killed 21, and wounded 18.

That is a hit rate of 4.2 rounds per casualty.  That’s not terribly accurate or effective for someone without training.

The velocity of a 223 is approximately 3,000 fps, depending on bullet weight and barrel length.  That is three times faster than some pistol calibers.  That’s pretty standard for most center fire rifle calibers.

The rate of fire is determined by the rate of trigger pull of the shooter.  Any semiautomatic functions identically.

What a “regular weapon” is, I have no idea.  But I guarantee that an AR-15 is not up to three times faster than a 10-22 with the same magazine capacity.

Then the complaint goes after the AWB.

AR-15s were not banned in the United States.

High capacity magazines were not banned, only the sale of new manufactured magazines.

Anyone willing to spend the money could obtain a nearly identical gun and magazines to the one the shooter used during the height of the ban.

The only thing right about this was that it expired.

Every unbiased study conducted, including by the US Federal Government, came to the same conclusion: the AWB had no effect on crime.

Lastly, is this insane bullshit to get around the PLCAA using the Remington Loophole. 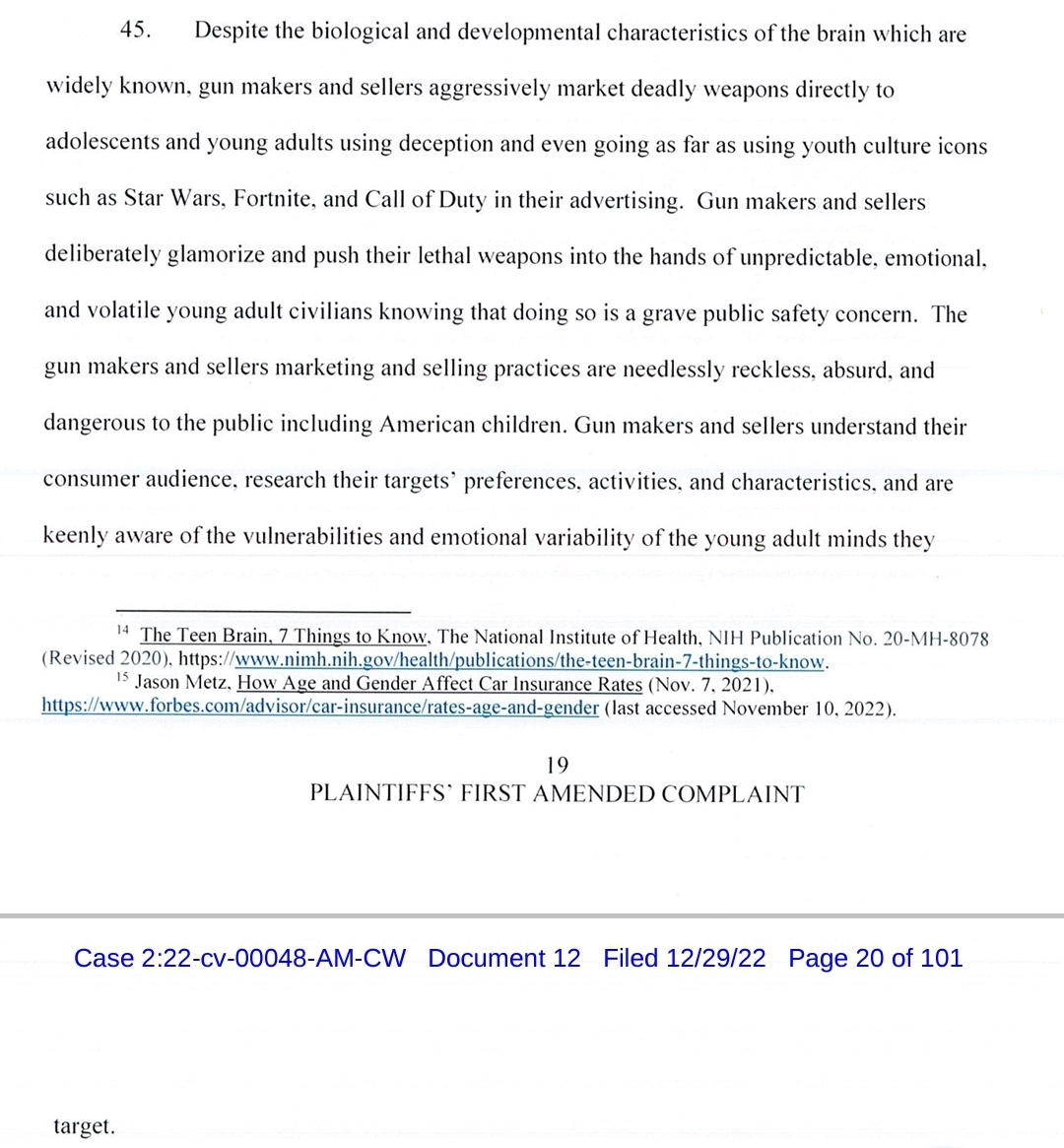 This is utterly defamatory.

Trust me, the gun industry ABSOLUTELY DOES NOT MARKET TO MENTALLY UNSTABLE OR OTHER PROHIBITED PERSONS.

The Sandy Hook lawyers got Remington’s insurance company to settle and now marketing is going to be the loophole that is used to circumvent the PLCAA.

The complaint tears into Daniel Defense. 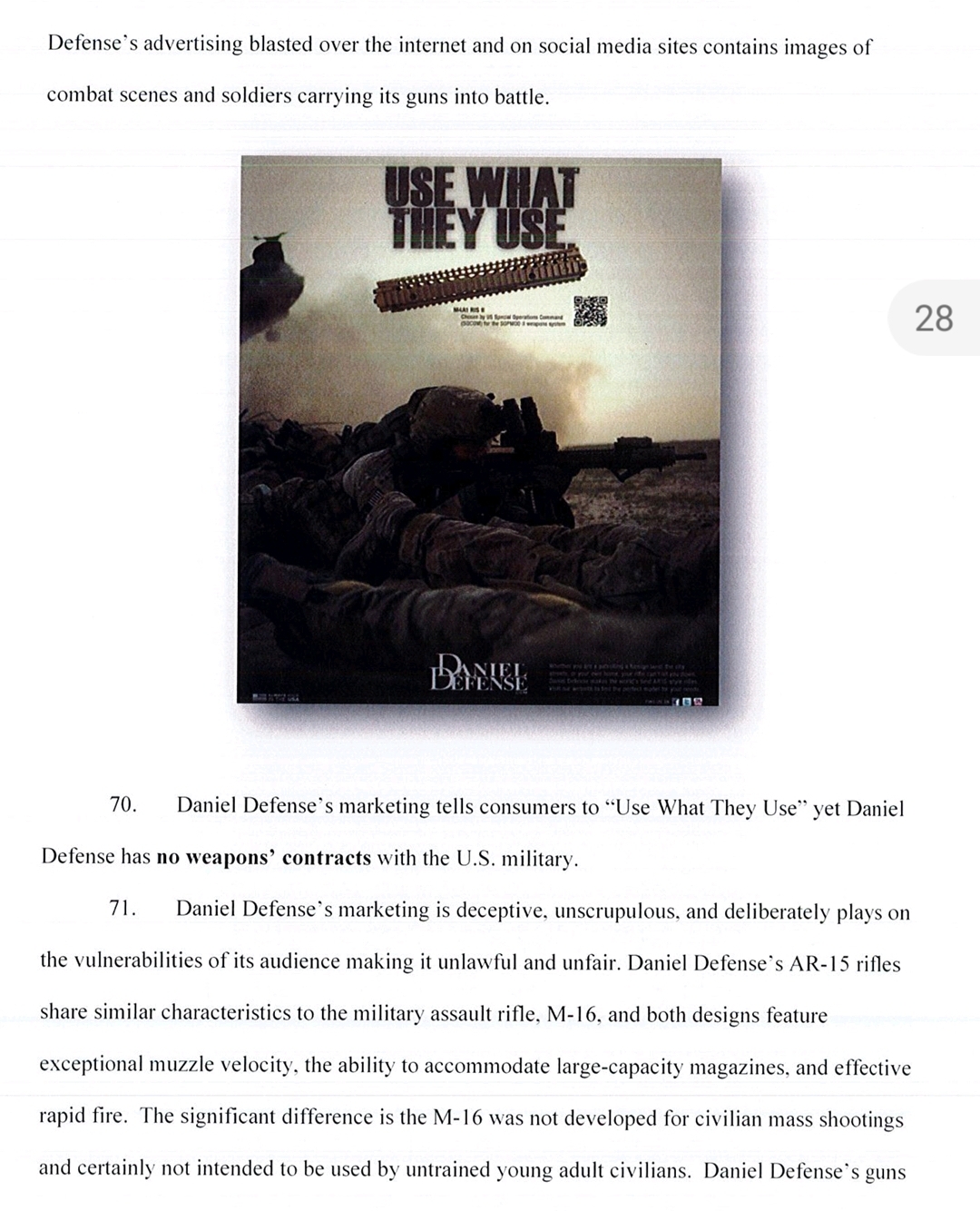 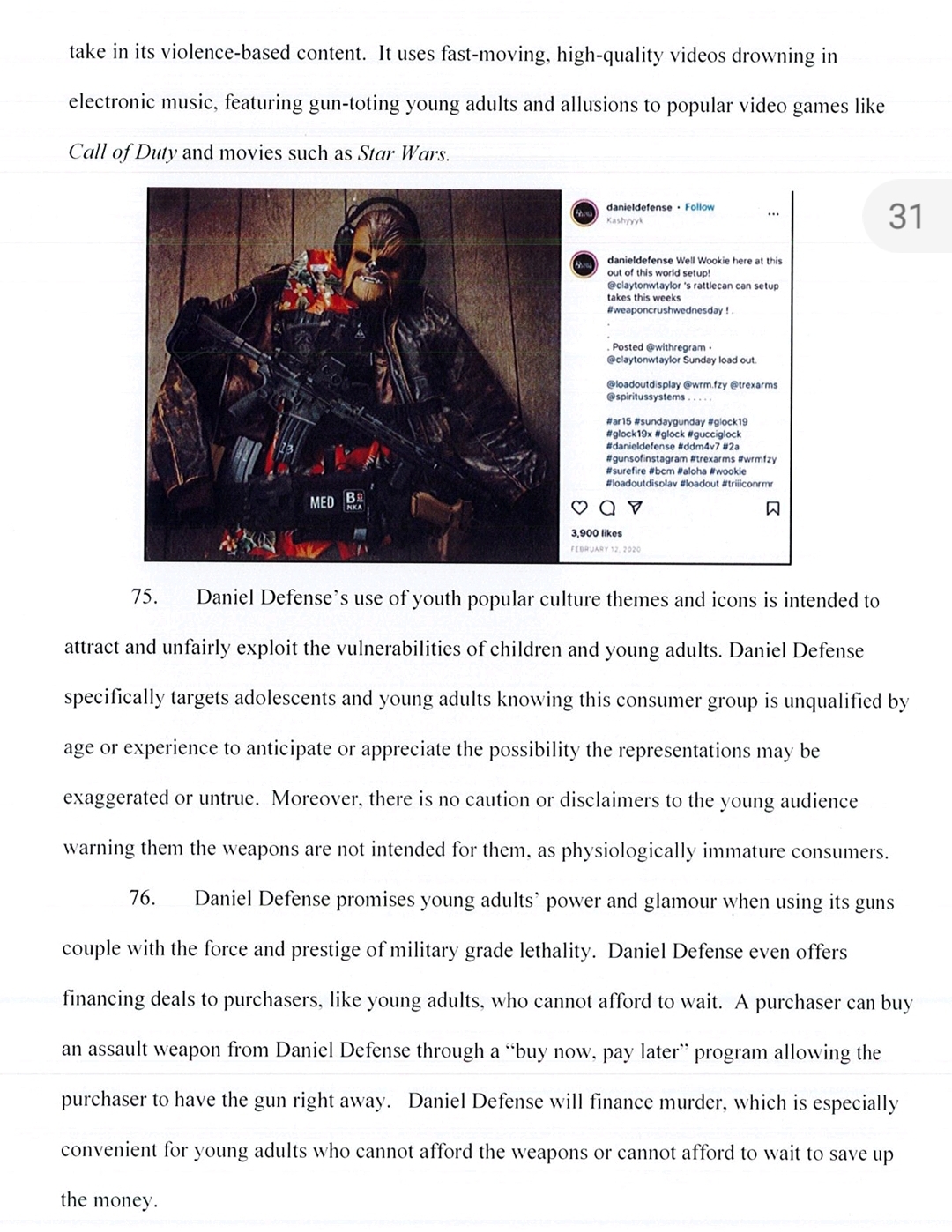 Daniel Defense markets using pop culture that appeals that the complaint even acknowledges is for young Adults.  Adults being the operative word of the sentence.

The average Call of Duty player is 21-35 years old.  The average Star Wars fan is 18-44 years old.  It’s been a long time since these franchises have been aimed at children.

The military aspect of the marketing is equally nonsensical, except for the most radical Leftist, when one thinks about the military, shooting up a school full of kids is not what comes to mind.

Daniel Defense’s marketing is heavily duty, honor, country, patriotism.  The connection that military marketing leads to attraction by mentally unstable people wanting to shoot up a school is dubious.

I find the phrase “finance murder” to be egregious.

Now here is where this really goes off the rails. 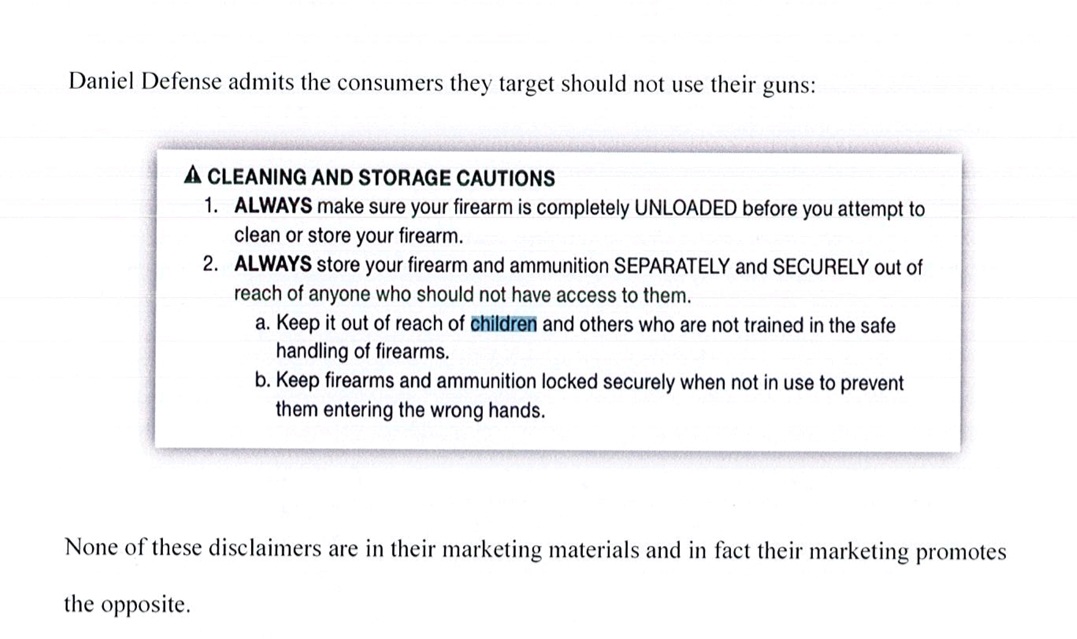 I do not understand how they establish that 90% of their consumers are not competent to responsibly use their guns, unless they want to establish that only military members are competent.

That is a can of worms I don’t think they want to open.

Then they actually turn the warning labels against Daniel Defense.

The logic of that actually hurts to think about.

This whole complaint is full of bad logic and factual inaccuracies.

This wasn’t drafted by some shit-tier fly-by-night firm.

This came from a big name in the law, Baum Hedlund.

Any technical person would be embarrassed to be this wrong but lawyers with dollar bills in their eyes and crying mothers to put on the stand will be this dishonest proudly.

If you want to hire me to do an actual, technical rebuttal of this, this is exactly the sort of consulting that I do.  Go ahead and send me an email.