For citizens of Nicolas Maduro’s socialist paradise the news is terrible, and getting worse with every passing day.Yesterday, we reported that one year after our November 2014 forecast, Barclays has decided that Venezuela is now past the “point of no return”, and a bankruptcy in 2016 will be “difficult to avoid.”

.According to the latest IMF estimate, Venezuela’s consumer inflation, already the world’s highest, will triple this year to a level above all estimates from economists surveyed by Bloomberg. This is because the IMF, which until recently had predicted “only” 204% inflation for Venezuela, already higher than the 140% consensus, revised its numbers and now sees a mindblowing 750% hyperinflation in 2016: this means that the average price of products and services will increase over eight times over the span of the next 12 months. 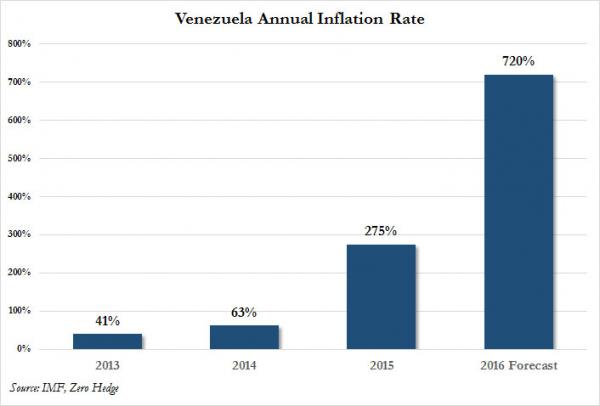 Source: This Is What The Death Of A Nation Looks Like: Venezuela Prepares For 720% Hyperinflation | Zero Hedge

While Brazil features more frequently than any other country, the deadliest place in the world in 2015 was Caracas, the Venezuelan capital, a city of 3.3 million people which recorded 3,946 homicides in 2015 – equivalent to nearly 120 per 100,000 residents.

It must have been around February 1996 in Venezuela, the Friday before Mardi Gras. I was driving to work when I saw a man with his tyke dressed this way. Down there you dress up for Mardi Gras the way you do it here for Halloween. 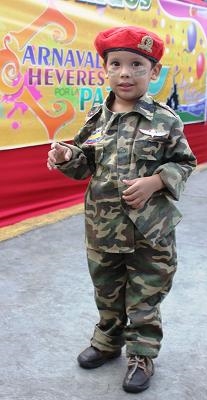 Obviously the kid did not have a say on what to wear, so it had to come from either Dad or Mom. That year, the “fashionable” costume was paratrooper, what one Hugo Chavez wore during his coup attempt.

Chavez had been pardoned before his trial was over and that made him eligible to run for any political office he wanted and he, of course, wanted to be President and made it clear.  The paratrooper-costumed boy was a serious indicator that he was resonating with the people and he would end up as head of the Country.

That night I had a long talk with the missus and it was decided it was time to pull out the stakes and “go north.” Financially we were damned good for a young couple: She had a job, I had my own business with a partner and it was doing very well. We had no mortgage or car payments, we had a great health insurance paid out of our pockets,  so other than the utilities and food, we had no obligatory expenses to speak of.

When we announced we were leaving and why, we were either laughed at or severely criticized. I was called crazy for leaving such a good standard of leaving and begin basically from nothing and worse, I was accused of abandoning my parents to live in Gringoland.  It was both hurtful and funny: My parents was one of the reasons I was leaving both for what they had to endure in their youths and was told to me (Spanish Civil War and Cuban Revolution) and because I wanted to establish a home where I can bring them to safety when shit hit the fan down there. They were not happy with our decision, but understood I had to follow my instincts.

Dad passed away unexpectedly before Chavez got elected. I had to return and arrange all the legal paperwork and set up Mom with her new life as a widow. She refused to move with us and I couldn’t blame her: Her mate was buried there and all we worked for was there. She had already migrated twice in her life and was in no mood to do it a third time. It took almost two years and the change of a country to convince her it was in her best interest to make a third migration.

By this time, the novelty of the Revolution was wearing off and my original crazy idea of moving out of the country was not so crazy after all among some of the original naysayers. For some, it was too late and only those who had ties to other countries via blood lines were able to escape…. if they had the balls.

I was amazed to find out how many decided to endure just a bit more because they were afraid of starting over in a different country. “It cannot get any worse” was they kept telling me. The first time I head that, my brain brought front and center a scene from Schindler’s List where the Jews had just forced to live inside the Krakow ghetto. It was winter, very cold and several were around a 55 gallon drum burning wood trying to warm when one of the made a very similar comment.

So it is almost 20 years later, “It will never happen here” and “It cannot get any worse” have been tragically proven wrong. Some of those who chided me are dead now because of medical reasons or crime, some changed their tunes and left (very few) and the rest are now  trying to survive the Socialist nightmare.

To all of you: Fuck You. I was right, you were wrong. Deal with it.