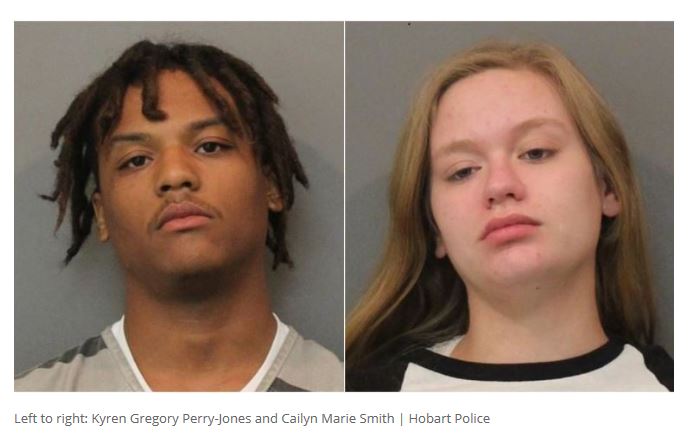 If that is not enough to make you sick, here is more info from another NWI.com:

“Y’all scared, just like your president … America is not great, (expletive),” Smith could allegedly be heard saying on a Snapchat video obtained by police during the incident.

Snapchat video obtained by police shows the Malibu, driven by Perry-Jones, swerve the wheels sharply “as if he saw the boys and wanted to hit them with the vehicle” while yelling ‘Y’all better get home,'” court records state.

Perry-Jones allegedly threatened to beat the boys up for calling 911, court records state.

In the video, Perry-Jones also said that if police questioned him about it, he would just say the boys called him a racial slur.

One of the boys told detectives Smith snatched their flag while filming the video, so they chased after the car. Only after the boys threatened to call police did the couple drop the flag and intentionally run it over with their vehicle before fleeing the area, records state.

Not only they were ready to cause harm, but already had some sort of defense prepared by the use of the Race Card. We all know the Media will side with whomever uses the Minority status, specially if they other side are Trump followers because they are automatically deemed to be racists,.

Just another case of TDS violence properly documented against the loads of fake stories alleging our side to be Klan Members kidnapping poor innocent People of Color and electrocuting gays.