Venezuela is really bringing out the fellow travelers

I am going to post the video of Maduro’s troops running over protesters, again.

It is important to hammer home this point.  Dictators throughout history have filled the ranks of military and paramilitary units with the most violent and brutal thugs their nations have to offer.

Evil exists in this world.

There are people who enjoy, who take pleasure in, throwing their weight around and hurting others.

Dictatorships give people like that the ability to indulge in their brutality by enlisting them to oppress the people under the dictator.

Hitler had his Brown Shirts, the Sturmabteilung.  Mussolini had his Blackshirts.  Stalin had the NKVD.

Maduro has those loyal to him in the GNB running over protesters and shooting civilians.

The amazing thing about the collapse of socialist Venezuela is that it is happening live, in real time, on international TV.

The evidence for the evils of socialism and the brutality of Maduro is exposed to the world for all to see.

But there still are Americans who are going to deny the obvious to push their ideology.

One of whom is Congresswoman Ilhan Omar. 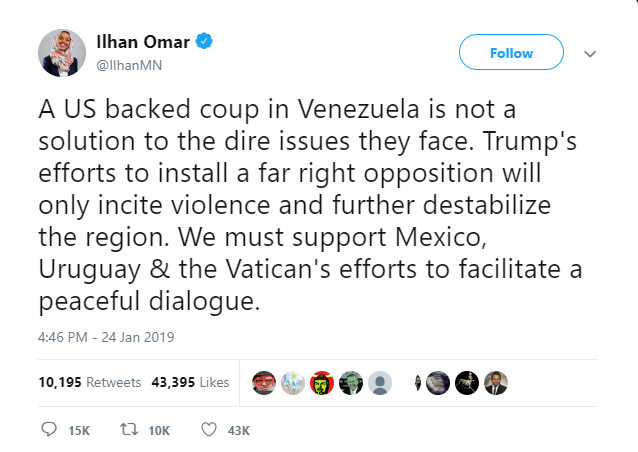 The United States under the Trump Administration official recognizes Juan Guaido as acting President of Venezuela.  He is a member of the Social-Democracy Voluntad Popular party, described as center-left.

In the independent media, Maduro vs. Guaido is described a socialist vs. socialist (which is a point Miguel has made before).

To the fellow travelers in America, since Guiado is every so slightly less Stalinist than Maduro, he must be far right. 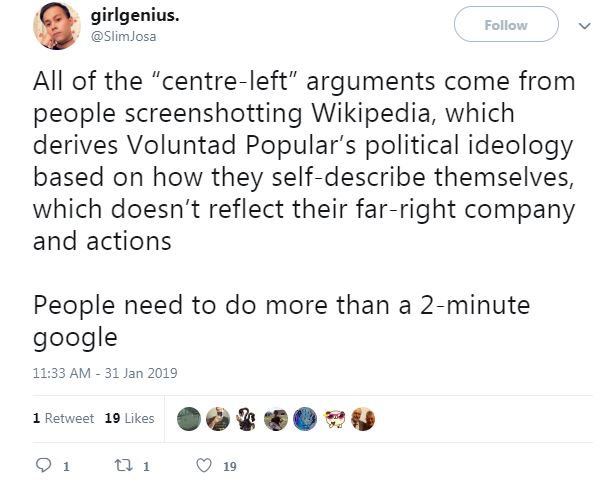 As Maduro’s troop continue to kill staving Venezuelans on live TV, the supporters of socialism come out to remind us not to believe our lying eyes and instead understand that Maduro is the good guy here.

.@LavenderNRed makes a great case that Venezuela – which is depicted in western media as a cartoonish dictatorship – is much more democratic than the United States. pic.twitter.com/rqZIgZyX1I

That;s right…. Venezuela and its fixed elections and people being murdered in the streets is freer than the United States.  Also, our poor people have an obesity issue while Venezuelans wait in line for bread that never shows up then eat out of a military dumpster.

But those facts are inconvenient for those trying to impose socialism in the United States.

*Can I ask at this point, what is what all the trans-activists supporting Maduro?  Girlgenius and LavenderNRed above are just two of a number of Lefist trans people who are pushing the “Maduro is better than Trump and it’s the US that is really evil” horseshit on Twitter.  I’m trying to decide if they are trans-trenders because they are radical Leftists or if being confused over your gender totally destroys your moral compass.  It’s like the Queers for Palestine, why would these people side with regimes that torture LGBT people to death for fun?

Code Pink, which ostensibly started out as an anti-war group, has now become full fledged supporters of communism.

They are occupying the Venezuelan embassy, acting as human shields for Maduro’s supporters (all though there is no military threat to embassy personnel in the US).

Liberal activists from the anti-war group Code Pink are refusing to leave the abandoned Venezuelan embassy in Washington, vowing to protect the building from a “hostile takeover” as the U.S. State Department labels them “trespassers” and calls on them to leave.

About 50 pro-regime activists have been living inside the building for several weeks in support of embattled socialist President Nicolas Maduro. In recent days, they’ve clashed outside the embassy with supporters of opposition leader Juan Guaido, who has called for a military uprising in Venezuela and has the support of the Trump administration.

Embassy Protectors are now blasting Paul Robeson’s version of the Soviet National Anthem in order to drown out Venezuelan opposition fanatics gathered outside of the Maduro government’s embassy in DC.

🎶🎵we fought for the future, destroyed the invader🎶🎵🎶 pic.twitter.com/k9Xj14byAy

And here is one, privileged American Code Pink champagne socialist telling a Venezuelan why he shouldn’t want Trump’s help.

This is the Sanders/AOC/Omar wing of the Democrat Party.  They are strongly anti-Biden.

Forget Sweden or Denmark, these people are pushing for America to become the Soviet Union.

They are advocating for a mass murdering dictator in Venezuela and supporting a man who thought Castro, Che, and Stalin where heroes.

There is this quote by George Orwell:

There will be no curiosity, no enjoyment of the process of life. All competing pleasures will be destroyed. But always — do not forget this, Winston — always there will be the intoxication of power, constantly increasing and constantly growing subtler. Always, at every moment, there will be the thrill of victory, the sensation of trampling on an enemy who is helpless. If you want a picture of the future, imagine a boot stamping on a human face — forever.

That perfectly describes social justice.  The internet hate mobs, social media attacks to get people fired, the popular media attacks on Kavanaugh and the Covington Catholic School kids.  That was the digital boot stamping in a face.

Trump represents a push back against that.  He was the anti-PC candidate.

These people want to be the Blackshirts and Brown Shirts for President Sanders.  They want to stamp their boots in our faces forever.

The only good news is, from the evidence of social media, the people wanting to wear the boot are old, upper-middle class white broads, pampered college kids, and gender confused fruitcakes.

Still, we are going to need more ammo.

3 thoughts on “Venezuela is really bringing out the fellow travelers”