I have to apologize. I read one of my go-to bloggers this morning about the Violence Policy Center infamous database titled “Concealed Carry Killers!” (cue dramatic fanfare) but I forgot who was it. He was mentioning an article published in Newsweek.

So I decided to drop by VPC and check the latest permutation of the report and see if for once, they dared to be truthful. As usual they were not.

VPC titles its work as Concealed Carry Killers hoping that you do not realize they are not using the legal term “murderers.” Why? because it would cut drastically in their statistics and reputation.  If you never read about this, hold on, it will be clear soon.

This is the splash page of Concealed Carry Killers: 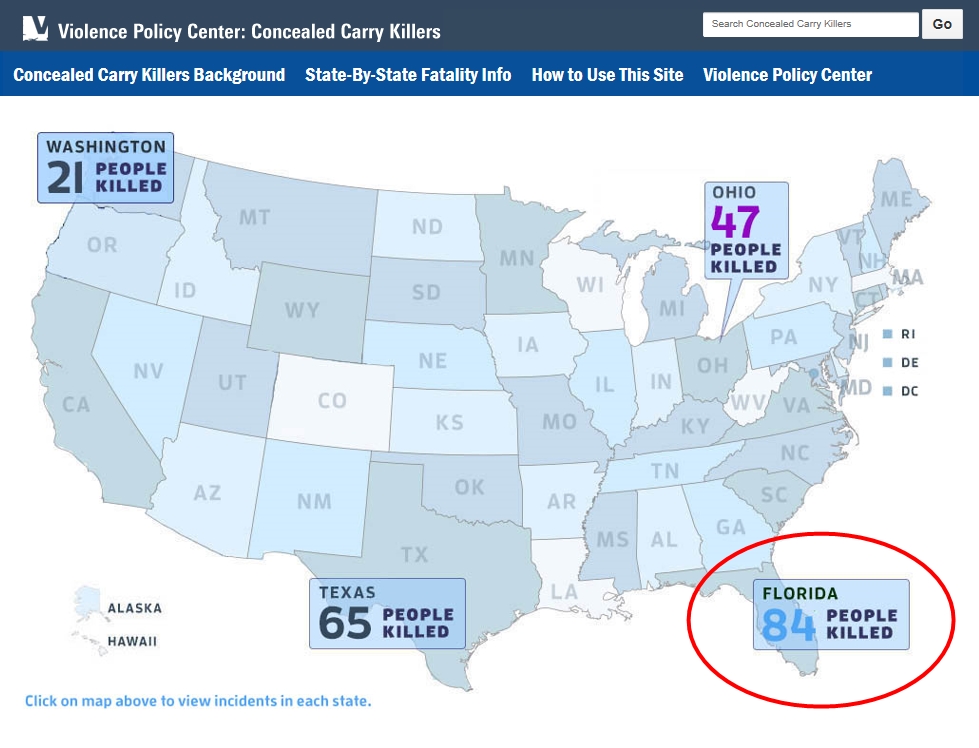 Florida will always have a nice place of hate in the heart of VPC since we were responsible for the Concealed Carry movement across the nation.  Since we have the most carrier of concealed licenses (over 2 million), we are bound to be the biggest bunch of bloodthirsty murderers out there, right?  That is 84 people killed this year! How’s that for gun crazy people? Wait… not this year? Last year then….No? then when? All “killings” since 2007? 12 years? That comes to 7 killed per year or what they call Tuesday night in Chicago.

But like in any good infomercial: Wait, there is more!  Remember the use of the word “Kill”? It is because they cannot say Murder for one little reason: A lot of cases have not had a legal determination (trial) yet and they keep them as “Pending.” Does VPC understand the concept of Innocent till proven Guilty?  Maybe yes, but as I mentioned above, it would screw with the stats as by my count and in their page covering Florida, there are  13 cases with the tag “Pending” with at lest one case going back to 2008.  So now, we no longer have 84 people “Murder/Killed” but 71.

And they actually included one case in which the person committed suicide and one in which the victim was a CWL holder and was shot with his gun by somebody without a CWL. That brings the numbers down to 69.  But not happy with that, they included 10 unintentional/accidental shootings because padding is necessary and we are down to 59 killed in 12 years or 4.91 killed per year.

And I am bored already with the math, so I am going to do one last calculation so I can show how ridiculous VPC’s outrage is. I don’t know exactly how many people with CWL were in 2007, but the sake of calculation let’s place it at a low even number: one million. So 5 killers per million CWL carriers ends up being 0.0005%.

0.0005% chance that you will be killed by somebody with a Concealed Weapons License Holder in the State of Florida. Or to make it simpler:

Chances of being killed by Concealed Weapons License Holder in the State of Florida: 1 in 200,000

Basically, we are safer than Mother Nature and by far.

PS: I think I got the math right, but double checking is always appreciated.