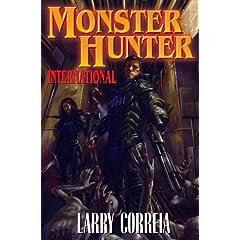 Several bloggers and a couple or more thousands of lucky readers have already plagued the net and Amazon comment section with the equivalent of standing ovations about Larry Correia’s book about Vampires, Werewolves, The Cursed One and other assorted monsters.  A horror book written by gun guy who actually knows about firearms is just too good to pass so don’t.  I did a review a while back so out of laziness I will just let you read it by clicking here. Click on the picture and pre-order your copy now.

I’ll leave you now. I am halfway on my 8th re-reading or MHI. Yes, it is that good.

Thank You for my Freedom. 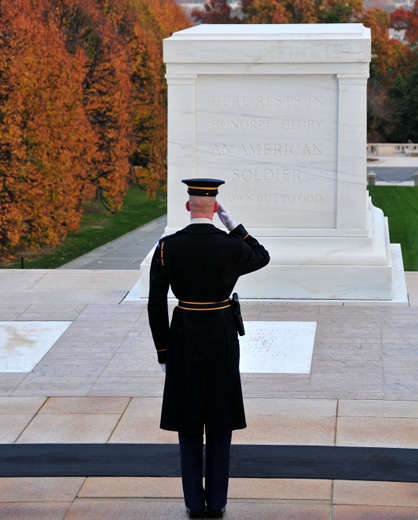 An Idiot showed up.

Today at work shortly before the end of the shift, I was enjoying the latest SWAT Magazine issue and in particular an article by Rob Sloyer about setting up rifle matches when a coworker walked by and asked me what was I reading. I did not reply but just showed him the cover of the magazine… and it happen.

Idiot: (chuckle, chuckle) “Are you one of those Gun Lovers?” (chuckle)

Me: “I do not love inanimate objects, only living things. How about you? Do you love a particular piece of equipment?”

Hoplophobes and Gun Haters (yes, they are haters of inanimate objects) seem to still be stuck with the notion that Gun People are inbred rednecks, schtumping their sisters, chugging beer and watching wrestling. And I know that Idiot saw me that way even though I am a Hispanic, only child that does not drink alcohol and falls asleep at the mention of Wrestlemania.

And we supposedly are the prejudiced ones.

Lord have mercy, I need a vacation.

You know your brain is about fried when you check your Blog’s site admin area and find 7 drafts that are only three lines long. In 10 days I’ll be officially out of a job and immersed in my NRA Instructor’s classes. After that I plan to do nothing much for a couple of weeks but rest, catch up on my reading (shitload of books coming soon), watch some TV, reload and shoot some. My neurons need to release all that negative energy and just vegetate for a while. However I am sure the Missus will find something for me to do. Damn it!

And in June we begin another Hurricane season. According to the experts “the 2009 hurricane season anticipates 14 named storms forming in the Atlantic basin between June 1 and Nov. 30. Seven of the 14 storms are predicted to become hurricanes, and of those seven, three are expected to develop into intense or major hurricanes (Saffir/Simpson category 3-4-5) with sustained winds of 111 mph or greater” which translates to we are going to get raped by pneumatic force or (if history repeats the theme of the last couple of years) we won’ get much but a breeze and a couple of showers. Anyway, it will be time again to check on the Hurricane supplies. I know I am well stocked on ammo (the beauty of reloading) and all firearms are functional. Drinking Water wise we have enough for 5 days in assorted water bottles and jugs. Food is about the sane for canned and I can whip up some other alternatives with the stuff in the freezer before a tropical twister decides to visit. Just in case I’ll review Southcom’s Hurricane Survival Kit once more and refill as necessary. Wife already warned that 12 different types of flashlights are more than enough, thank you.

Note to self: Casted semi-wadcutter bullets for IDPA matches make for very slow and crappy revolver reloads. They do sure cut the paper pretty though. Lee Mold for round nose bullets in whish list.

Speaking of revolvers, I have to say that they are fun to shoot. I bought an used S&W model 65-2 .357 magnum with a 4 inch barrel. The only modification to it was installing a set of Wolff springs and a Hogue grip and that thing was good to go. I’ve had a chance to shoot it during IDPA matches and I found it very accurate (however the shooter is NOT accurate by any means) plus the added value of forcing me to make sure the rounds end up in the A zone because I don’t have that many rounds or the speed available as the semi-auto guys.  Now the only thing I need is an ICORE club in the area to be really happy.  As of now, the only club in Florida is way north in Jacksonville at the Gateway Rifle and Pistol Club.

So I will soon be joining the millions out there without a job. Amazingly enough, rather than bad times almost everybody at my hotel is being sacked because the hotel is going into renovations. The sheer stupidity of shutting down right before the tourist season with at least three major conventions coming to the area during the same season and leaving over a hundred people without jobs has not ran well with the working bees. Hell, people are pissed off and they are vocal about it leaving me wondering if somebody may actually work out his/her anger into a full revenge mode. 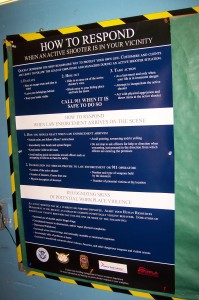 Of course the same management that made the decision of sacrificing the goose of the golden eggs has prepared itself in the event of a really pissed-off worker deciding to use them as target practice with the poster pictured above which details how to respond to an active shooter. Also some cute card-sized instructions have been passed along so you can pull you bifocals and read them as soon as you hear the detonations. That and 911 is pretty much all the permitted defense we are entitled to in a Gun Free Zone because as sure a Christ made little apples, Security (Me and my fellow officers) is not going to risk becoming a receptacle of bullets for anybody at work. Callous? you betcha but I kinda value my life first and foremost and unarmed heroics make for a nice obituary and a widow but not much else.

Thankfully in Florida we are allowed to have our weapons secured in our vehicles at work. Not that it will make a whole lot difference if I happen to be one of the first unlucky ones that face an active shooter but if I am spared of the initial volley, I can always make a bee line for the parking lot, retrieve my sidearm and take a defensive posture (And you thought I was going for the heroic shit and save the day? Nope!) It was my custom to leave my vehicle keys in the locker so I would not lose them during the active shift, but after the announcement that we were out, I carry them with me all times. I also try to park as accessible as possible to the work area and my awareness of everything and everybody has grown  a hundered-fold. Still it is a incomplete solution to a serious compounded problem created by silly job and legal politics. Then again it will be over in 2 weeks. Till then, prayer is in the procedures instead of a gun.

The Mexican Drug War Weapons lie still goes strong in the media. In today’s Washington Post’s editorial we see it once more:

Mexican President Felipe Calderón and President Obama said during a news conference in Mexico City last month that roughly 90 percent of the weapons seized in operations against organized crime in Mexico came from the United States.

But MSNBC’s “hard hitting” article on the same subject accidentally provides the truth.David Berryhil at the 10-8 forums posted the math behind the media bullshit:

Doing the math gives a much lower number of firearms traced to the U.S. than the media would like you to believe:

“The Mexican government has handed over information to U.S. authorities to trace 12,073 weapons seized in 2008 crimes…”

“About a third of the guns submitted for tracing in 2007 were sold by licensed U.S. dealers….”

One third of 12,000 = 4,000 firearms traced to U.S. firearms dealers in 2007. That number is quite a bit smaller than what the media has reported. They report the large number of illegal weapons in Mexico and imply (or lie) that all of them come from the U.S.

Or in much simple numbers, only 1.3% of firearms confiscated by the Mexican Army from Drug Dealers can be tied to licensed firearms dealers. Sorry but fucking up the data by 300,000 firearms is not a mistake, it is a boldfaced lie in anybody’s book. Then again, “journalists” do not care as long as their legs tingle anticipating acknowledgement in the form of a waving of the pinkie from the White House Supreme Being.

Enough with the ammo hoarding people! Yes I understand that the Obama administration wants our rights deceased and that many state legislatures have put forward microstamping, ammo registration and other assorted loads of legal crap, but enough is enough. This madness is starting to affect shooting sports and and we are begining to lose new shooters because they can’t find ammo for the new gun they just bought. We are poisoning our own well and killing the joy of shooting. Even reloading supplies have disappeared from stores. 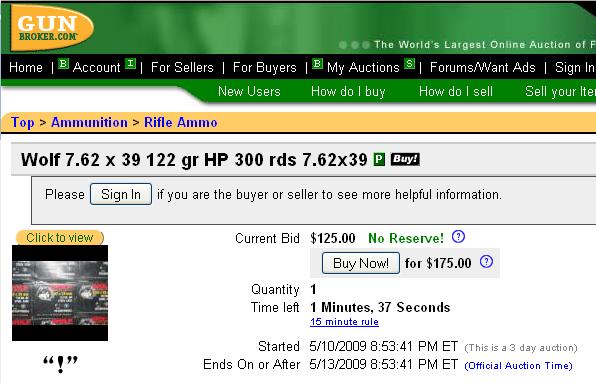 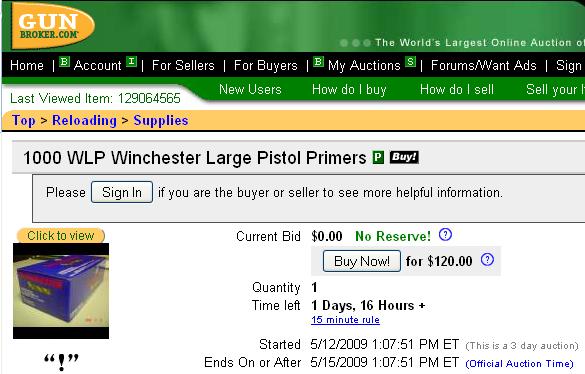 And this is just insane! Not two months ago or so you could buy 4,000 primers for that price including shipping and Hazmat fees. Now people are being auto-shafted  because they are buying in full panic mode. It has to stop. And no, there is no conspiracy by the manufacturers, just our own idiocy.

Be very afraid. At the end of this month and coinciding with my hotel firing everybody including yours truly, I’ll be taking the NRA Instructor’s class.  Hopefully I’ll be an instructor in Basic Pistol, Home Firearms Safety Instructor and Personal Protection in the Home. Amazingly, I already have 4 people interested in classes so there is certainly a demand. I gotta figure how to set up the whole thing and get to it. We need more shooters!