It is not paranoia if there is proof.

Security exercise at Ft Knox targets the Tea Party. “Them peoples are dangerous!”

Ft. Knox requested that the memo containing the instructions of the exercise be removed from Mark Alexander’s blog and he politely complied. But the problem with the internet is that many people will make copies and keep them.  Something about Free Speech and the need to be informed, that pesky First Amendment! Somebody kept a copy and then somebody else made a copy and so on and so forth till I landed one. 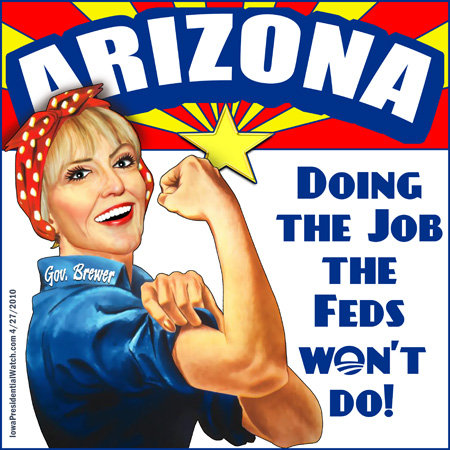 Now if we could get her in Congress instead of Pelosi…..

Political Moron of The Week: Mayor Daley. Dude, it is embarrasing.

I know desperation must be setting deep in Mayor Daley’s heart, but when I read in The Chicago Sun Times the following:

“This is coming from international mayors. They’re saying, ‘We’re tired of your guns, America. … We don’t want those anymore because guns kill and injure people,’ ” Daley told a news conference at the University of Illinois at Chicago.

I think it is time for him not only to step down but to seek mental care urgently.  Oh hell, I’ll say it, Daley, you are a treasonous bastard who rather side with the foreign Countries than protect & defend the Constitution of your country.  You should be given an all expenses paid long vacation in Club Gitmo.

Hat Tip to Of Arms and the Law.

Molly Norris is exacting mea culpa by the gallons. On her website, she depicts herself on a caricature giving reasons and excuses plus a written statement about Everybody Draw Muhammad Day. Apparently she did not expect the cartoon to go viral and she soiled her recycled panties at the horror of offending somebody Non-Republican, Non-Tea Party or related approved-to-insult groups. Do notice that the cartoon depicts her wearing a T-shirt with a well known logo which might explain a lot. Even the L.A. Times seems to be miffed at Ms. Norris’ change of underwear. I am guessing they thougt she was related to Chuck.

Well Ms. Norris I am sorry you never expected that Everybody Draw Muhammad Day would go crazy like it did. Personally I am going to be posting my crudely photoshopped cartoon on May 20 and if anybody gets pissed about it, tough tittie said the kitty when the milk went dry. 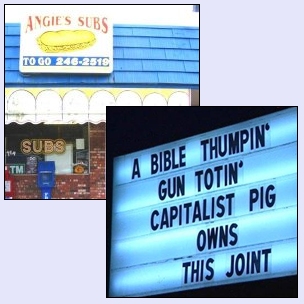 Angie’s Subs owner Ed Malin not only feels the pain of taxation and unchecked progressiveness but believes in letting everybody know….. Big and Bright!

I am gonna have to remember to drop in whenever I go by Jax again. If you live in the area or happen to drive by, stop, eat some and congratulate.

Not enough gun or you can’t place the shot where it counts?

The Holy Grail of Handgun Shooting and Gospel Writ of Self Defense is that you shouldn’t carry anything in a caliber that does not start with a ‘4.’ Even though the evidence is out there and it has been for many moons, the mantra of .45 is better and 9mm sucks keeps being repeated ad nauseam. What evidence you say? Gelatin Tests? FBI protocols? Wind tunnel testing? Nope, just the rest of the world and how people get killed.

The only two countries I know where the .45 caliber is the principal caliber for self-defense are the United States and Mexico coming behind a distant second. The rest of the world lives and breathes 9mm and .38 special and day in and day out the bodies keep falling. And in the great majority of those rounds are ball ammunition, not the latest and greatest hollow points with controlled expansion, GPS, DVD player and beverage dispenser included. I might be a tad biased since I have personally seen the effects of 9mm ball on real humans. Two incidents that were life changing for families, friends and of course the victims.

Incident one happened a couple of decades ago on a Saturday afternoon in a country south of the Caribbean. The Missus and myself were watching the boob tube after a hearty lunch when detonations were heard coming from outside. Although it was not unusual to hear gunfire due to criminal activity or just criminals being stupid in my neighborhood (ask me about Tactical Feng Shui. I think I invented it.) What followed was a wail of a woman in anguish. I recognized the voice as one of my neighbors which I had known since I was a toddler, grabbed my gun and stepped carefully out of my house.  After a quick scan of the area, I saw my neighbor on the ground holding the inanimate body of her husband. I rushed over, got her to release the body and I proceeded to examine the man who was like a dear uncle to me. He literally draw his last breath as I checked him out for wounds and found one bullet entrance right under his left armpit. It ended up being a raking shot that took both lungs and the heart. It was later determined that the shot originated at the scene of the crime some 20 yards down the street fired by a criminal who was attempting to carjack a couple. The gun used was in 9mm caliber round nose although I forget what gun.

The second incident was a blue on blue shooting. Dear friend of mine whom I known since he was sucking pacifiers had become a cop and was working in the Auto Theft squad. He and his buddies were following 2 guys on a stolen vehicle trying to figure out where they were stashing the purloined cars. They trip ended up in front of an unfinished apartment building with subterranean parking. They decided to go ahead and proceed with the arrest, got out of the car with weapons drawn and jumped on the criminals who were just opening the building’s gate. Across the street, an uniformed officer armed with an Uzi saw the commotion and thinking he was witnessing a carjacking, let out a burst of his sub machine gun. All the shots missed except one which impacted my friend in his upper left arm shattering the humerus and destroying most blood vessels and nerves. He barely made it to the hospital and survived by pure luck and great medical skills but, to this date he walks with an arm which lost 50% of its function. The round doing all the damage was a FMJ 9mm, considered ineffective by many gun gurus. My buddy may wanna have a word with them.

What I am trying to convey here is that the 9 mm is a hard hitting and effective round if properly placed in the opponent’s anatomy.  But what I see is that people will skip training for caliber. I can almost read the train of thought in the brains where they convince themselves that if they hit somebody close enough with a .45, the perp will just keel over impressed by the round. Problem is that bad guys tend to be ornery and not follow instructions unless they are precise and to the proper point of impact.  Close only works for horseshoes and grenades.

Vanity Fair magazine asked a sniper pal “Was God with you on your tour” My pal replied “Absolutely”. The reporter then asked “Well, don’t you feel the enemy was thinking the same thing?” My pal shrugged and said “Jesus rose from the dead on the third day … but you can visit Mohammed’s grave” … Amen.