Dear Salon.com: Devil is in the details.

Salon.com has a heart stabbing story called The discovery of my father’s gun. A piece designed to make you hate guns because they posses evil powers that make people do evil things. And the author almost got away with it… almost… until she wrote the following:

My mother sips and continues. “Of course the police want to see it, so I unwrap the duct tape and open the shoebox. It’s the first time I’ve seen the gun in 25 years — it’s a .32 caliber Smith & Wesson, and it’s pretty. The police think so, too. One of them searches on eBay and discovers a similar gun going for $500.

And that is why they will lose again. They need to lie and emote to sell themselves.

For those who do not understand the quip, Ebay does not sell guns and, to the best of my recollection has never sold guns. They even forbade the sale of anything gun related after the Virginia Tech shooting.

And just in case Salon.com decides to “edit” the “mistake,” here is a screen capture of part of the article in question. I saved the whole thing for future references in .pdf format. 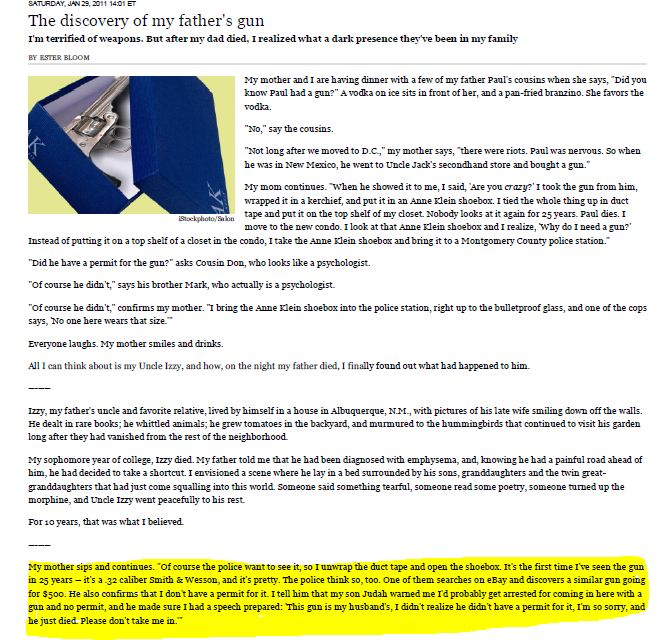 And the highlighted part in fuller size:

Michael Mayo over the Sun Sentinel writes about Open Carry in Florida and how is such a bad idea.

The gun lobby and weapon-friendly politicians are loading up for a Wild West legislative session, with proposed bills that would allow Florida gun owners to openly carry their weapons, lift gun bans at college campuses and criminalize doctors who ask patients about gun ownership.

Another bill would sanction local politicians or agencies that enact gun ordinances stricter than state law.

Actually I agree with him on the expression but not the interpretation. For us is one of joy at seeing some common sense legislation finally being introduced while Michael is trying to use the old tired cowboys are bad propaganda that has never worked.

After living in trigger-happy Florida for over two decades, my anti-gun sentiments shaped by a New York City upbringing have softened. Now I’m more ambivalent. If people want to own a firearm because it makes them feel safer, I suppose that’s their Second Amendment right.

I just don’t want to be around when they snap.

Let me see, you lived here 20 years, you are a journalist with access to any and all news databases but somehow you could not find an incident when a citizen carrying a concealed weapon just snapped because that would be the first thing you’d do. Unfortunately for him, that has never happened. But he can say what he pleases, I suppose that’s his First Amendment Right.

I also don’t want to have guns in my sight all day long, an unnerving prospect that the open-carry bill would make a reality.

Currently those with concealed weapons permits must keep guns hidden. I like it that way, because it keeps the bad guys guessing and sort of levels the playing field for us non-packing namby-pambies.

Translation: “I am the kind of person that will run to my NRA-Gun-Packing Neighbor after a hurricane because he can defend me if the Bad People come through the neighborhood. I am such an useless moral moron, I don’t have the balls to accept I am wrong but I don’t mind as long as somebody keeps me safe and I don’t have to suffer.”

Under the provisions of the latter bill (HB155), a pediatrician who asked a parent if there’s a gun in the home where a toddler lives could be charged with a felony and fined up to $5 million.

Said state Sen. Eleanor Sobel, a Democrat from Hollywood whose husband and daughter are physicians: “We always hear from the leadership about getting government off our backs. Now they want to interfere with a physician having a safety discussion?”

Hey Docs (and Mayo), I am a certified NRA Instructor and Safety Officer. I am also an IDPA Safety Officer yet people don’t come to me asking me to “discuss” bunions, high blood pressure or how to cure hemorrhoids.  But somehow we must heed advice from people that have no training whatsoever in firearms and firearms safety just because they have a diploma that says they are doctors? The same kind of people responsible for 195,000 DEATHS A YEAR for medical error? You are kidding me, right?

Michael, you guys have been wrong for close to a quarter century in Florida. There were no Wild West shootouts when concealed carry was passed, there were no old folks shooting each other at movie lines when the Castle Doctrine was expanded and there were no Workplace massacres when business were told they could not tell workers they could not keep guns in their cars. You promised us over a stack of bibles that murders and violent crime would rise to the ionosphere but crime overall actually dropped. After all this time, you guys should be tired of being wrong over and over and by now, nobody trusts you to tell us the truth because you are unable to see it as plain as it is every day in the State of Florida.

Munitions factory goes up with lots of bangs.

Venezuela’s CAVIM had a wee bit of a fire.

And in true socialistic/paranoid fashion, Hugo’s mouthpiece Vice President Jauja said: “We can not rule out any hypothesis, Venezuela is a country threatened by powerful international forces and we know of groups who act crazy in our territory and our military and our security forces have been gradually neutralized. ”
That means the CIA will get the blame which the Obama administration will deny and point fingers to the NRA and the “heated rhetoric of the Right.”

UPDATE: Some pics and vids including stuff that rained around the neighborhood.

Stolen without shame from Oleg Volk:

Gun Motivator of the day: Cat with Gatt. 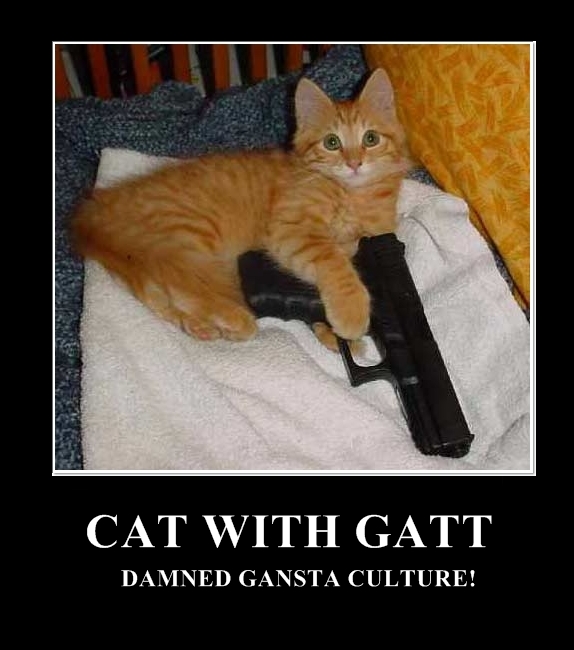 No, I am not doing FaceBook. I already have my account where people think I am a nice person…hehehehe.

“I want an apology at the very least,” said New York Assemblywoman Grace Meng, a Queens Democrat. “Making fun of any country’s leader is just very disrespectful for someone who says he is a proud American.”

I find more insulting that an American comes out to defend the leader of a communist nation which is openly trying to screw with us. Are we seeing the repeat of the spineless ways of the Cold War when the democrats would shit in their pants and scream “Don’t make them mad!” every time Ronald Reagan poked the Soviets in the eye?