This was one hell of a year.

A year ago, the forces of Gun Control were in full blast aiming for our collective jugulars. AWB Part Deux was being waved as the Final Answer for the “gun epidemic.” the Media was still crapping kittens about Wayne LaPierre’s “Good guy with a Gun.” Congress was feeling pressured by the Gun Control zealots and some members started to transform their spines into jello. A new  gun control group was formed, genetically modified as astroturf and it would soon become Moms Demand Action.

Experts across the intelligentsia assured us that the NRA was toast and that Gun Control was finally coming and was here to stay forever with the promise of Peace on Earth, free DirecTV and 90% discount on Unicorn Farts.

We took some bloody hits this year. The usual Suspect States of NY, California, New Jersey and Connecticut got even stupider laws which none would have prevented a Sandy Hook event. Colorado got into the Dark Ages but it was a Pyrrhic victory when  three senators had to forsake they political lives and a message… my ass a message, a shot across the bow was sent to every politician: You Will Pay For Voting Anti Gun. Even Newly Elected Virginia Governor Terry  McAuliffe saw half of his 14 point lead evaporate the moment he started to spout Anti Gun rhetoric.

And we cannot dismiss the acquittal of George Zimmerman as a victory for Gun Rights (and for George himself, that is obvious.) A guilty verdict was going to be the cornerstone that Antis would have used to build a monumental case against Stand Your Ground Laws. Even though the case itself had nothing to do with it, The Narrative was set that way as the knives were being sharpen and everybody ready to kill that “evil” law.  But the jury’s decision just killed the initiative and the hopes they had to send us back to medieval England and Duty to Retreat.

This is not to say that the Opposition will give up: They won’t. My guess is that they will try again to go the Colorado way because they understand that there is no will at the federal level to implement changes via Congress.  Stay informed and support your State level Gun Rights organization plus the NRA, The Second Amendment Foundation and whomever else you deem worthy. Also, be on the look-out for fake Gun Rights Organizations that are either fronts for Gun Control Groups (Usually found saying “reasonable” or “have a conversation” or any iteration of the clichés used by the usual suspects) Also keep an eye on those out-of-the-blue groups that are wildly strident and as for an immediate donation: double and triple check them as they are nothing more than con artists that have no problem crapping on other pro-gun groups.

I’d say we dodged a big one, but in reality we did not. We stood strong, fought harder, overcame them by sheer numbers, activism and noise . And they lost…bad.

Man, Gun Control Activists must madder than an Amish electrician.

Overall, 2013 was a good year for Florida gun owners.

Some great legislation was passed, although some controversial bills became law too.

The state reached some important milestones, which speak to the ever increasing popularity of gun ownership among residents and visitors.

Given what’s happening elsewhere, such as mandatory registration of modern sporting rifles and their magazines in Connecticut, or New York’s outright prohibition of certain types of popular firearms, or California’s ban on lead bullets, things could be a lot worse.

Very thorough list. And yes, we were very lucky/active in about our 2A rights.

You never stop adjusting the plan.

OK,  I do like a couple of Reality TV shows. The one I will not miss is The First 48 since it plays cases from South Florida that I may have heard about but only know about what the local media tells you which ain’t saying a lot.

Last week they had the episode “Calling for a Killer/Boiling Point.”  The one titled Calling for a Killer was a case that happened in Broward County, just across the county line in what was initially thought to be a case of road rage gone very wrong. when a man was shot on the highway and killed.

As it turned out, it was more than that: Two men get into an argument in a Waffle House. Other than words, nothing apparently happens. One of the men gets in his car while the other is seen in video on his cell phone. Man On The Cell Phone turns out to be calling his buddies who happened to be nearby as they arrive very quickly. They talk and the buddies go after the First Man who had just left, follow and shoot him as both vehicles are moving on the highway.  First Man is dead.

I admit that I was shocked as I would have thought the incident would be over by the time the driver hit the highway. Heck, any of us would have thought the same and relaxed.  I concede that it was the perfect storm of negative circumstances, but still one cannot disregard the continuum of determination, and disregard for human life that these imbeciles had for another human being.  It was not over even when the most imaginative of creators would say it was over.  Evil can stretch long.

So what happened to the Bad Guys? (For those of you who do not watch TV or don’t want to wait) Unfortunately for the Bad Guys, they happened to be in a Waffle House with more cameras than a TV station, Man On The Cell Phone apparently had 2 cells and butt dialed 911 while talking to his buddies and telling them he wanted somebody killed….and yes, it got recorded. The vehicle that two buddies used was found and inside a cellphone with a call list tying them to his friend …. and selfies of themselves inside the car with what was going to be the murder weapon.  So they basically provided the cops with all the evidence they needed even before committing the crime.

Thy were arrested and are awaiting trial for murder.

PS: The other reality TV show I like is the grandaddy of all: COPS.

No need for Mens Rea: You can also be a felon!

Pelleteri, an expert marksman who was once employed as a firearms instructor, won a contest hosted by a police department.  He received, from the police, a legal Marlin semi-automatic rifle that held 17 rounds of ammunition.  Several years later, the State of New Jersey amended N.J.S.A  2C:39-1(w)(4) dealing with firearms and because his rifle held more than 15 rounds, Mr. Pelleteri’s rifle was subject to the “assault firearm” ban enacted in 1990.  The decision in his case says that “[w]hen the police recovered the gun from defendant’s residence in December 1993, it still had the manufacturer’s tags and the owner’s manual attached to the trigger guard.”

To be clear, Mr. Pelleteri wasn’t a criminal before he received this rifle form a police department.  There is no indication that he had committed a crime to bring the attention of the police upon him (it is unclear in the record why police were at his home).  By all accounts, he was an upstanding, law abiding member of society and this rifle, capable of holding 17 rounds was perfectly legal when a police officer gave it to Mr. Pelleteri in the 1980s.  But now, it would now be the cause of his incarceration.

Some idiot in Twitter was arguing about Gun Owners being paranoid and that the only way to become felons was to purportedly to break the law.  He insisted that the government could not make people into felons and that we were smoking some sort of medicinal herb.

As much I tried to explain, he could not understand that the concept of Mens Rea  (guilty mind or breaking a law on purpose) is on it way to extinction in the legal framework of the United States. We have become a country of Malum Prohibitum (crimes made so by statute) and that nobody is immune….unless you are one of the special ones.

“There ought to be a law” has come home to roost…but it is an ostrich and not a simple chicken. We are about to be smothered under the fat  thighs of unchecked legislation.

I am guilty of not following Knife Laws or helping more on Knife Rights. Where does your state stand on Knife Rights? Click on the link and find out. 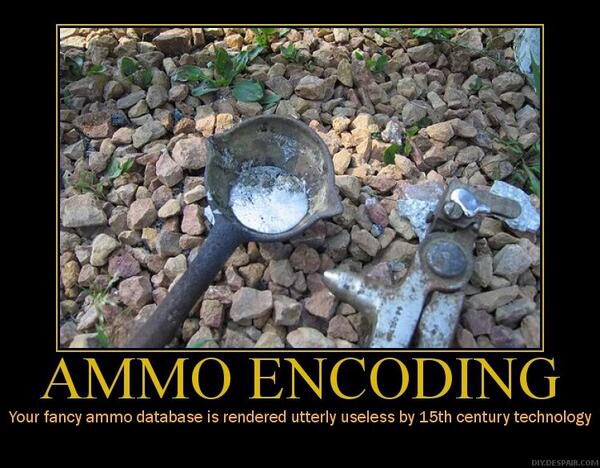 Who needs more than 7 or 10 rounds for his gun?

More than 400 crazed teens — who mistakenly thought the rapper Fabolous would perform — erupted into brawls all over Kings Plaza Shopping Center in Mill Basin on Thursday at 5 p.m., sources said.
The troublemakers looted and ransacked several stores as panicked shoppers ran for the exits and clerks scrambled to pull down metal gates.

Some of the teens staged a game of “knockout” on the top floor — and one may have been carrying a gun, sources said.
“They were playing the ‘knockout’ game,” said Shante, a 21-year-old perfume merchant, in reference to a violent trend in which teens try to knock out an unsuspecting victim with a single punch.

Life has a way to make stupid people eat their words and suffer their action with unintended consequences.