A School Shooting you won’t hear about from the Antis.

Police say Amado Contreras, 25, and his 24-year old brother, Landyer, attacked Landrick Hamilton, 24, with a pool cue in front of the college’s main building. During the fight, Hamilton got a gun from his car at about 1:50 p.m. ET and fired one shot, hitting Amado Contreras.

The shooting comes almost eight weeks after a Florida appeals court struck down a regulation on another state university campus that banned students from storing guns in their cars. Florida law prevents anyone from possessing or exhibiting guns on school campuses, including university and college campuses; however, the same law says the ban doesn’t apply to guns in cars.

via Shooting on Fla. campus may have been self-defense.

First things first: If you are attacking somebody with a pool cue, that is not simply a “fight” but assault with a deadly weapon. And two versus one kicks in disparity of force so it looks (very initially) that it is a defensive situation.

Hamilton has no prior history of discipline problems at the college, which was known as Brevard Community College until last year. But he violated the school’s policy, Glisch said.

This is gonna prove interesting and see it heading for court because of the recent court decision brought by the good Folks at Florida Carry:

The shooting comes almost eight weeks after a Florida appeals court struck down a regulation on another state university campus that banned students from storing guns in their cars. Florida law prevents anyone from possessing or exhibiting guns on school campuses, including university and college campuses; however, the same law says the ban doesn’t apply to guns in cars.

The college authorities would look like pretentious jackasses for punishing a student who by manner of force majeure had to “violate” campus policy. It would be literally to say “Dear chap, we much rather see you dead that to have violated our sacrosanct directives.” Then again, Academia is that much stupid.

We’ll see what happens with this case.

Do notice at the end of the video how (once stress levels have gone up) fine motors skill have turn to unyielding  crap.

Before there was a George Zimmerman….

…..we had Richard Jewell.

A 22 minute video about the unfounded accusation about the 1996 Summer Olympics bombing in Atlanta, so take the time to watch it. His enemies were an overzealous yet lazy Law Enforcement, The Mainstream Media and Academia feeding on the “Bubba” prejudice.

It is gonna annoy the hell out of the cat: How to Make and Reload Wax Bullets

One day, while talking with my neighbor about reloading, he told me that his father-in-law had reloaded his own ammunition, and that since his death his equipment had been stored in their barn. He asked if I would like it, and in one of those boxes laid the 42nd edition of Lyman Reloader’s Handbook (copyright 1960). Flipping through that book revealed an article by Charles M. Heard, titled “Wax Bullets” where he described a wax bullet formula along with the proper way to prepare the case for loading.
The wax formula is softer and more flexible than straight paraffin and even includes grease for barrel lubrication. I now use the method he described for both preparing the shell case and the wax mixture.
Wax Bullet Recipe
1 lb. paraffin (available at your local grocery store)
1/4 lb. beeswax (available at your local craft store)
1/8 lb. water pump grease (Lubriplate No. 115 grease works well)
1 flat pan (a cake pan works well)
1 old pot or double-boiler to melt the wax and mix in the grease

via American Rifleman – How to Make and Reload Wax Bullets.

Before you go crazy, this works with revolvers, not semis. But I have a bunch of .38 special cases being wasted and I can put to proper use.  The noise should be lower than a cap from toy pistol of old.

On my way to the local arts & craft store.  I’ll be making a post on manufacturing & test.

Matthew Bracken’s What I Saw At The Coup

Mr. Bracken can spin a tale or two. Check out his books.

Posted because I needed to update my Insurrectionist Card.

Shannon Watts does not want to ban all guns…. 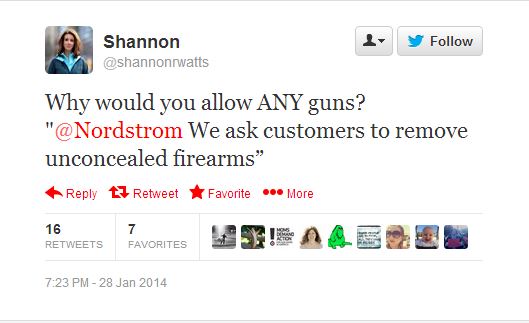 And she is not above lying through her teeth to obtain what she wants….

Unfortunately, the day closed in a bad note for Sharon as Dear Leader barely mentioned Gun Control in the State Of The Union speech:

Paranoid is what The Unprepared call The Ready.

I know that for the “average” I am weird: I carry a knife or a multi-tool,  I have at least one spare meal and 2 quarts of water for emergencies in my vehicle, a small first aid kit that goes the backpack that I carry everywhere at work (quikclot & israeli bandage included) and that does not include the big First Responder bag in the fore mentioned vehicle. Pen, notebook, fully charged cell, good flashlight and some other goodies also make the list of At Work Carry.  I have been taking some sort of first aid/first responder class since age 13 and even my CPR card is current.  Basically, short of major loss of limb or highly traumatic wound to head or thorax, I can assist myself or others till the  Cavalry arrives.

I am not asking that everybody at work to be a certified EMT or being able to perform major surgery, but for the love of God, can you at least carry a simple box of band-aids in your frigging car? Get your own flashlight even if it is a cheap one found at the check out counter at WalMart?

Or failing that, can you come out of your mother-rucking shock and call for a rescue unit?

As I was about to leave work today, there was a somewhat nasty vehicular accident.  One “crossover” T-boned a sedan and only by the grace of modern safety features, nobody got killed. Both individuals walked out of their vehicles but one (the one that got t-boned) had a cut in his head and his walk was not very stable.  I did not see the accident but heard the noise. By the time I got outside, there were about a score of people watching. I went over the accident site saw the blood on the victim and asked him to lean against his vehicle so he wouldn’t fall on his ass.  I turned around and saw that more people had joined the watch, but not a single one was on the phone with 911. I had to yell to Substitute Boss to get on the radio and call the company’s EMTs/Paramedics to the scene…the idea had not even crossed his mind.

Once trained professionals arrived and since I was not a witness to the event itself, I left.  As I was leaving, PD arrived and the crowd suddenly pulled a disappearing act, included those who were actual witnesses.  Nobody wanted to be involved, nobody wanted to help even if it was some words of comfort.

We have a Nation of Useless Cowards (with apologies to Jeff Snyder) that not only do not want to help, but have gone so into the deep end of entitlement that won’t even help themselves by the simple act of being ready.

My guess is that if something happens to them, they expect that somebody (not like them) may dial the Three Magic Numbers which will provide them with instant and free emergency medical services or other help.

May God bless them with an incident-free life.