Buddy in Facebook posted this song from a Venezuelan singer I did not know. Not bad at all.

There are a number of articles out there covering this bill. It is a kitchen sink type of bill. Given everything that is in it, almost any center fire semi-auto firearm could be banned under it.

The one that covers most of the important parts and is a quick read is AWB 2022, the way I read it over at Divemedics blog.

A few of the 2A YouTubers have mentioned and my feeds confirm, that the main stream media is claiming that this bill is dead in the Senate.

No. It is not. The Senate already passed one gun control bill this session, there are just to many Republicans that can not be trusted. Make the calls to your Senators, make sure that they know how you feel. Yes, your Senators are Democratic anti-gun rights people, call anyway. There were four Democrats that voted NO on H.R. 1808.

The thing to realize is that these Senators and Representatives are not listening to arguments because Republicans and Democrats are talking pass each other.

This is a fight that is not going to stop.

To repeal the Protection of Lawful Commerce in Arms Act, and provide for the discoverability and admissibility of gun trace information in civil proceedings.

Be it enacted by the Senate and House of Representatives of the United States of America in Congress assembled,

This Act may be cited as the “Equal Access to Justice for Victims of Gun Violence Act of 2022”.

SEC. 2. Repeal of certain provisions of the Protection of Lawful Commerce in Arms Act.

The contents of the Firearms Trace System database maintained by the National Trace Center of the Bureau of Alcohol, Tobacco, Firearms and Explosives shall not be immune from legal process, shall be subject to subpoena or other discovery, shall be admissible as evidence, and may be used, relied on, or disclosed in any manner, and testimony or other evidence may be permitted based on the data, on the same basis as other information, in a civil action in any State (including the District of Columbia) or Federal court or in an administrative proceeding.

So while you are calling your Senators, call your Representative as well and tell them to vote NO on H.R. 2814

Miguel’s Hit and Run: England is the testbed of future US Law Enforcement

“Someone has been caused anxiety based on your social media post. And that is why you’re being arrested.” British policing, 2022. pic.twitter.com/D4MZhbXq08

And then the official “oopsie, our bad!”

When we stand together against tyranny, we beat it together.

Be warned all Woke Gestapos who wish to police the inside of our heads and trample on our hard fought for rights for free expression.@BadLawTeam @thereclaimparty @WeAreFairCop are coming for you. pic.twitter.com/z2dRaCONke

A retraction, but you can bet it will be reworked so it looks less legally stupid and more palatable to the minions.

And, of course, it will be served here in the US with fries and Ranch dressing on the side.

Gavin Newsom Hopes CA Will Be Epicenter of Wind Energy

In a message that absolutely tells you how off the rails California Governor Gavin Newsom is, he is planning to make California “carbon neutral” by 2045. All by harnessing the power of the wind.

The stated goal is to create 20 gigawatts per year via wind.

This is the state that has to buy power from other states. It is taking water from the Colorado River to keep its population and crops alive, that doesn’t have enough power generating stations now and they think that wind will be the answer.

Texas has a boat load of wind power. Unfortunately when it gets really hot the winds stop blowing, just when everybody wants to turn on the AC.

Of course the plan is unlikely to account for the vast increase in electric vehicles. Many states are already asking EV owners to only charge their cars during particular times of day, in order to avoid rolling brown/black outs.

You just know that this is going to cost Billions of dollars and it will come from tax payers. And the odds of it actually achieving anywhere near the goals stated are near zero.

Miguel’s Hit and Run: Stick your progress where the sun don’t shine.

If you leave us alone, Well we’d all be just fine

That would be freedom which is verbotten for the masses. And that is why they want our rifles taken away: They must not leave us alone and unsupervised, or we might actually come with a real insurrection.

Miguel’s Hit and Run: The Liberal talking point of “When Black buy guns, Republicans will pass Gun Control” destroyed by the Democrats.

This is nothing more than history repeating itself again and again. 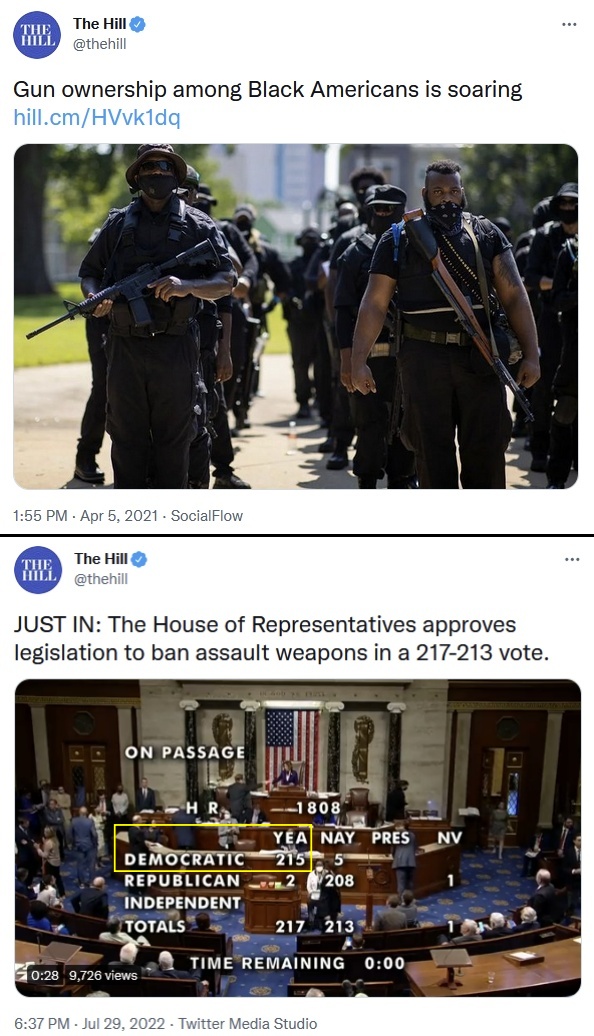 The House passed the AWB

So the AWB passed the House.

Now it goes to the Senate.  I’m not sure what will happen there.

Does Manchin vote for it knowing how West Virginia is on guns?

The Supreme Court will have to take on subject of assault weapons.

The good news is that the last SCOTUS decision on guns went out way.

The “in common use” line in Heller goes our way since there have been tens of millions of these guns sold since then.

Alternatively, we demand that every Republican running swear on any possible political future that they vote to repeal this AWB as soon as they can.

If it does pass, it will be a rough couple of years.

What we need to do us make gun bans as toxic today as it was after the Clinton ban.